On May 8, the Hub at UCSB was more than a stuffy cafeteria designed for students to fine dine on Panda Express; it was an electronic dancing fest. TOKiMONSTA, also known as Jennifer Lee, dropped bubbly, indie-electric beats for an ecstatic crowd. Her album “Lune Rouge” recently nominated for a Grammy and she was not one to be passed up. From making beats in her dorm to overcoming a detrimental brain disease, TOKiMONSTA is an inspiration to youthful masses and shows determination, passion and excitement for the music production industry.

Opened by UCSB’s own Alaska Yokota, professionally known as ALASKAFORNIA, the night was filled with a lively series of eclectic dance music. The entirely female DJ lineup was a must-see for music lovers, mid-week partiers and the like.

Decked out in blond pigtails and a reflective windbreaker, ALASKAFORNIA animated students with stellar remixes and house music. As she transitioned from jungle beats to a trap version of “My Neck, My Back,” the crowd went mad. I mean it; one girl spun her ponytail so fast she had to escort herself off the dance floor. ALASKAFORNIA’s wide array of electronic allurement proved her a worthy opening for TOKiMONSTA, who she referenced by saying, “She’s my mom!”

With crowds migrating from the beer garden to the pit, TOKiMONSTA graced the stage  effortlessly, like an electronic angel. A monochromatic look of purple hair and purple bug-eyed sunglasses glistened in the blinding neon lights. With a few taps of her computer and disc turns, lo-fi indie beats saturated the Hub, people nodding their heads in a daze. But she didn’t stop there: with a remix to “Get Your Freak On,” she was jumping up and down, fist pumping to her fans. The energy only intensified. 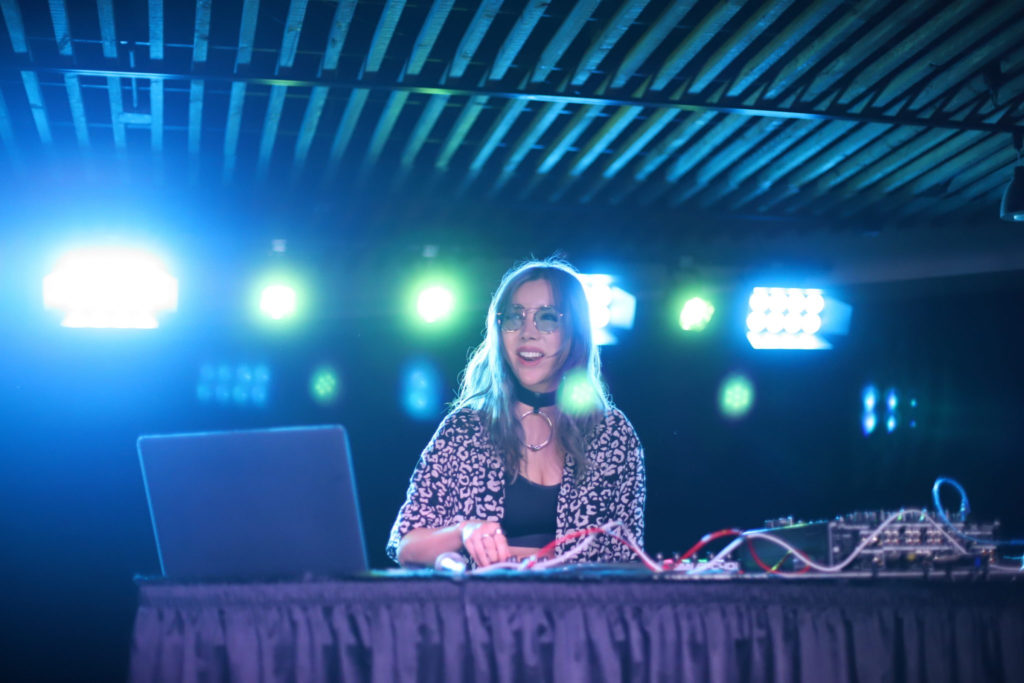 The array of dance moves in the crowd covered a wide spectrum, to say the least. Slow dancing, moshing, head banging and even a guy shuffling made the experience even better. To thrill everyone even more, TOKiMONSTA played the biggest hit of her first album — a remix to “Falls” by Odesza.

“Shout out to all my Asian people! This song is for you!” she yelled. A low and slow beat effused from the speakers and put the crowd right into their feels.

The crowd had much to say about the unique artist.

“She reminds me of Bjork but for electronic music. I just listened to her album, and my favorite is “Realla,” Sheila K., a graduate chemistry student, said.

The chill, ambient atmosphere led many to her show.

TOKiMONSTA made it a mission to interact with the concertgoers and played off of what they liked to hear.

To finish up her unforgettable set, TOKiMONSTA slipped into a deeper tone. Playing her famous hit “Put It Down,” a song featuring R&B artist Anderson .Paak, had masses chanting the intoxicating lyrics. Rainbow lights flashing, the euphoria of the night lingered into the late hours before she closed.

TOKiMONSTA’s music will continue to be heard even outside walls of the Hub. An incredibly talented, forward-thinking female DJ is definitely a role model for our generation, and if you missed the phenomena, you can still catch her on all musical platforms; she won’t disappoint.