The Daily Nexus
Science & Tech
Ecosystems of the Santa Barbara Channel
May 9, 2019 at 9:30 am by Cristian Loza 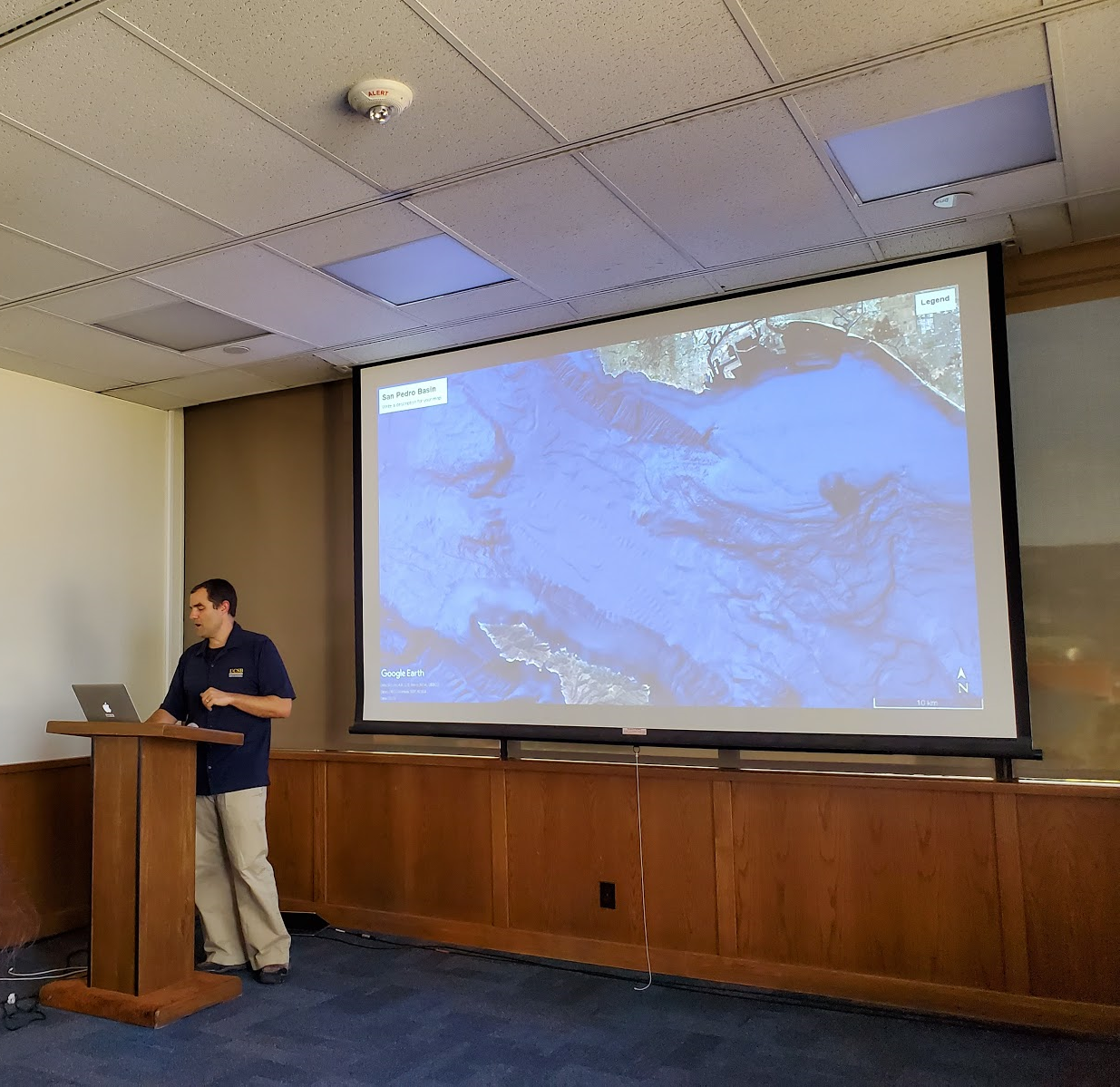 Last week, Valentine gave a talk about the unusual ecosystems found around oil seeps around the California coast. His presentation is related to the exhibition about the 50th anniversary of the 1969 Santa Barbara oil spill. / Courtesy of Cristian Loza

Last Wednesday, UCSB professor of Earth science and biology David Valentine held a presentation to discuss the ecosystems of oil in the Santa Barbara Channel.

“The Pacific Plate is gradually sliding past the North American Plate, and it’s tearing off pieces of the North American continent. In the course of that activity, what happens is the formation of a borderland with lots of valleys and ridges that separate basins from one another,” Valentine, of the Department of Earth Science and Marine Science Institute, said.

A lot of Valentine’s work revolves around studying these valleys and ridges that have been created in the last 20 million years, with a focus on the study of three local basins.

“A basin is basically a geological bathtub. The first is the Santa Barbara Basin, and it’s about 2,000 feet deep. It’s a sealed basin, meaning the bottom portion of it is restricted from the ocean,” Valentine said.

According to Valentine, the neighboring Santa Monica and San Pedro basins are about 3,000 feet in depth. Because of the depth of these geological underwater bathtubs, they must be explored by using very specific tools.

Valentine went on to describe four of his team’s primary research tools, each engineered to perform a specific task.

According to the Wood’s Hole Oceanographic Institution, the research vessel Atlantis is owned by the U.S. Navy and is one of the most sophisticated research vessels to date.

The Atlantis is outfitted to deploy Alvin, a human-occupiable submersible dedicated to getting up to three researchers as close of a look as possible, down to “a depth of around 14,000 feet,” according to Valentine.

The second vehicle utilized aboard the Atlantis would be the Jason research vehicle, which, according to Valentine, is remotely operated from the ship and is tethered to the Atlantis.

“It has all the same capabilities as the Alvin, except there is just no person in it,” Valentine said.

Finally, the third vehicle is the Autonomous Underwater Vehicle (AUV) Sentry. “It is a vehicle you drop into the water, and it goes off and does its thing. It is preprogrammed to do whatever it is you told it to do over the course of the day,” Valentine said. According to Valentine, Sentry’s biggest primary use is for the mapping of the ocean floor at high resolution and for mass image collection. 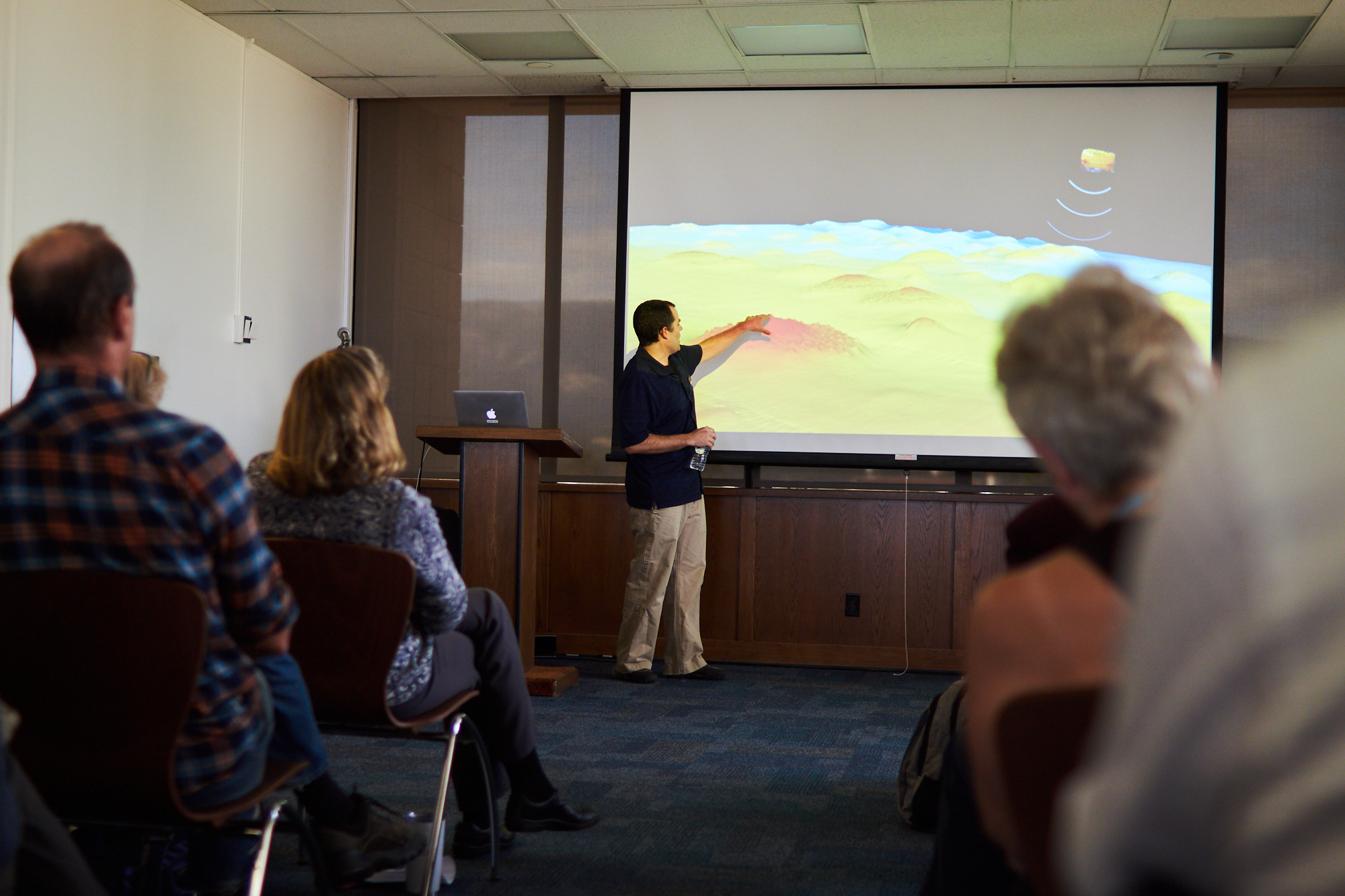 The goal of the mapping was to demonstrate what happens to the sea life as the amount of oxygen increases going upward or decreases going downward. But Valentine came across two issues when reviewing the 30,000-plus images that were taken: Not only were the images lower quality than expected due to the darkness of the seafloor, but “there was a one-mile stretch of images that were pure white,” Valentine said.

As the Sentry traveled upward, it came across an underwater feature that was about 60 feet high and 400 feet across. After some evaluation, Valentine concluded that this feature would be something worth investigating further.

After the deployment of the Alvin submersible, it was discovered that the entirety of the underwater feature was made of tar.

“What made this interesting was that the seafloor around it was coated in sediment. When you have a sediment-coated seafloor, there isn’t a place for larger organisms to take root. Having a mound like this provided hard substrate for a tremendous amount of diversity,” Valentine said.

In terms of the dating of these tar mounds, Valentine noted there is nothing specific within the tar’s chemical makeup that allows for this. Instead he and his colleagues decided to take an alternate route that would allow for an accurate dating process.

“We looked at the microfossils, the organisms that were in the sediment that got incorporated into the tar. What we saw was that this feature was put into place about 40,000 years ago,” Valentine said.

“Bizarre ecosystems, fluid flow, unusual anaerobic communities and mount structures” are just a few of the wonders that can be found within our Santa Barbara Channel.