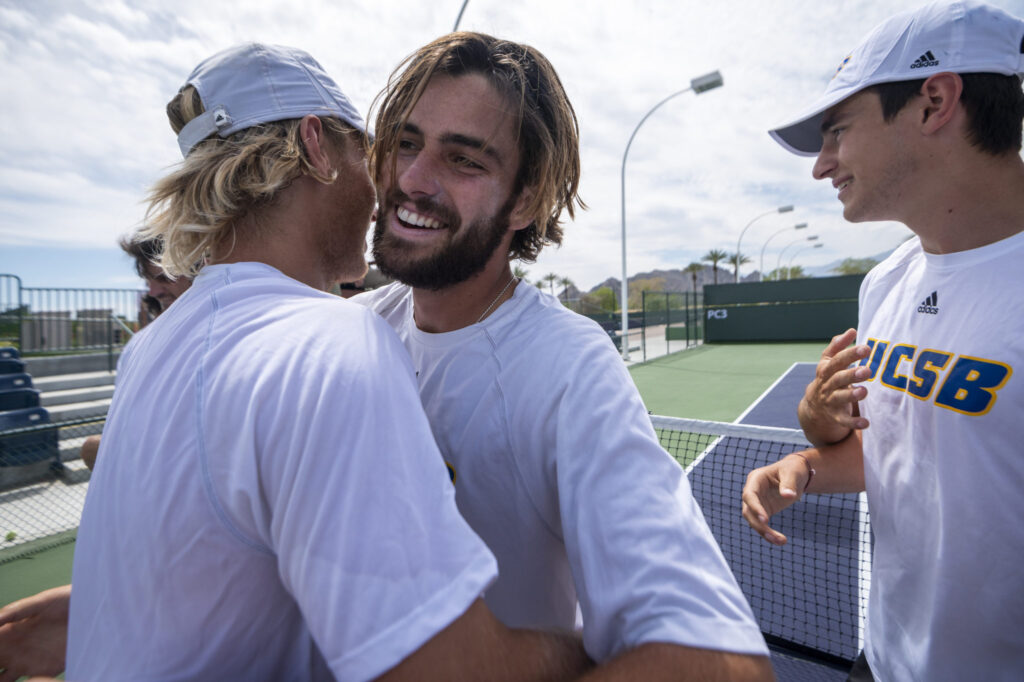 To conclude nothing short of a historical season, the UCSB men’s tennis team was handed their final defeat by No. 12 Stanford (19-6) in the second round of the NCAA Tournament. The 4-0 loss marked Santa Barbara’s first in its last eight games and cemented their finish with a 17-7 overall record.

Nonetheless, their advancement into the second round alone was an accomplishment that had not been fulfilled in over 20 years. The Gauchos, therefore, were reluctant to go down without a fight.

The dominant senior duo Nicolas Moreno de Alboran and Anders Holm delivered an impressive 6-2 win over Stanford’s Sameer Kumar and Timothy Sah on the number one court. Alongside their teammates, the co-captains finished their season boasting a 15-9 overall record.

Their time playing together is not quite over. The two, now ranked 64th in the nation, will represent Santa Barbara at the NCAA Doubles Championship in May. Singles standout No. 58 junior Joseph Guillin will also join them and compete for the singles portion.

This is the first time in program history that UCSB will be represented by more than one player in each of the respective NCAA Championships.

The pair battled Stanford’s Jack Barber and Sangeet Sridhar in an extremely tight set. Tied 3-3, Barber and Sridhar, bolstered by the cheers from their home crowd, pulled away, stealing the next three matches and the doubles point from the Gauchos.

It seems impossible to deny the momentous effect of Stanford’s home court advantage. In the six singles face-offs, four were forced into the third set, but no Gauchos emerged victorious from them. Nonetheless, UC Santa Barbara fought tirelessly throughout each in an attempt to counter the previous doubles loss.

Senior Hironori Koyanagi was forced into a third set by sophomore Timothy Sah, where he ultimately dropped the match. Though it was not reflected in the outcome, Koyanagi was an integral part of the roster starting in the second half of Santa Barbara’s season.

The senior ended his last season as a Gaucho with seven straight wins, sending his dual match record up to 14-7.

Anders Holm was bested by senior Michael Genender in a two-set sweep. The loss was uncharacteristic of Holm, who in his last eight appearances had been undefeated.

Nationally ranked singles Moreno de Alboran and Guillin each left with unfinished matches. No. 16 Moreno de Alboran was called while he was leading 2-0 in the third set, while No. 58 Guilin was battling to take back his early lead in his respective third set.

Stanford senior Sameer Kumar solidified the win for his team, taking out Victor Krustev in two games. He first delivered a hefty 0-6 sweep to UCSB’s sophomore on the third court. Krustev responded eagerly and forced his opponent into a tiebreaker but ultimately lost the battle.

And, albeit with more difficulty than anticipated, Stanford swept the Gauchos on their home court.

But, as aforementioned, the UCSB men’s tennis team has nothing to be ashamed of. Over the course of the 2018-19 season, the team earned numerous accolades and gained immense recognition for UCSB in the eyes of both Big West and NCAA.