The Daily Nexus
Opinion
Case Cracked: Casual Coitus on College Campuses
May 2, 2019 at 2:00 am by Marie Stevenson

During my first week of school at UCSB, I noticed colorful square packets scattered on the bathroom counters, stuffed into dispensary boxes and generally littered around the dorms. Periodically, our RA will put out free feminine products and condoms. My roommate will sometimes come back from class and see a small red square placed in the center of her desk. It’s a running joke: “I thought I’d help you with your endeavors,” my other roommate would comment. 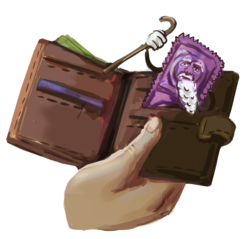 UCSB is known for having a very active party culture, including — among other things — drugs, alcohol and, of course, hookups. The message behind having free condoms readily available is essentially a reminder to be safe, an acknowledgement that sex will probably take place so it’s best to be prepared for it. At the beginning of  fall quarter, I saw free condoms being put out, along with tampons and pads. I observed that contraceptives and feminine products were being categorized together, implying some degree of transferability regarding their necessity. This is something I disagree with. You cannot will your period to stop, as awesome as that would be, but (in a perfect world) you can choose whether or not you’d like to have sex.  My discomfort, of course, does not translate into support for any sort of regulation, policing or actions that should be taken. I look back now and see the right to participate freely and explore your sexual identity as something that years of sexual liberation, progress and technological innovation has brought to us. I do however, disagree with the conflation of what I see as cultural pressure to participate in casual sex with being liberated, progressive and “woke.”

My first exposure to the idea of casual sex was … an NPR study on the distinctive characteristics of hookup culture. University students recounted their experiences and spoke about the infamous back and forth game of trying not to become emotionally attached: “If casual sex was taboo a generation ago, emotional intimacy has become taboo today.”

You cannot will your period to stop, as awesome as that would be, but (in a perfect world) you can choose whether or not you’d like to have sex.

I learned of the ritualistic body language of potential partners on the dance floor, as well as the exclusivity of hook-up culture, where the demographic is mainly white and heterosexual and the few minorities that are accepted come from particular intersections perceived to be more “exotic”— namely Asian females and Black males. From a young age, my perception of casual sex was colored by this study.

I saw college parties as a setting for these non-inclusive, hyperheterosexual, primal activities. Also, being in a long-term relationship and coming into this campus as a first-year, I observed the active party culture going on around me. Drawing from my preconceptions I felt skeptical and hesitant to embrace that culture.

However, according to numbers, my caricatured idea of college life may be incorrect. From a 40-year study conducted between 1976 and 2016 on 18 million teenagers, 54% of high school students in 1991 reported having had sex, while only 41% did in the early 2010s.  This study even suggests that “today’s 18-year-old more closely resembles a 15-year-old of the 1970s or ’80s.” So even though it may feel like everyone around me is “doing the deed” 24/7, we are actually participating in less sex than older generations.

What is the reasoning behind this? Perhaps there are more romantics among us today who feel as I do and are more likely to give it some time. Or maybe people are generally less interested in dating earlier on. Or it may be that the definition of sex and intimacy has changed. It ultimately boils down to several factors, the center of it all being technology.

The fact is that sex is just one of the many choices at your disposal as a young adult, and as long as you’re informed and consent to it, it can be fun.

According to the study, this phenomenon fits into a larger trend of kids staying kids longer due to lengthened lifespans and more present parental supervision: “Today’s teens were found to be less likely to drive, work for pay, go on dates, have sex, or go out without their parents.”

Technology has affected sex in other ways. With so much to do on social media and streaming services, more people prefer to stay in and use devices instead of, say, go out to do drugs, drink alcohol and find partners.

Though statistics support this view of people our age, our campus appears to oppose the general data about Gen Z’s sexual habits. Could the reputation of UCSB’s social life create a concentration of people more interested in sex, alcohol and drugs, thereby exempting this population from a generalized claim?

It may be an interesting thing to think about, but in the end it should not affect the way you go about your life. I may have had my preconceived notions about casual sex and even taken a moral stance on it back then, but the fact is that sex is just one of the many choices at your disposal as a young adult, and as long as you’re informed and consent to it, it can be fun. Just stay safe out there.

Marie Stevenson wants Gauchos to weigh the risks and rewards of sexual activity.