For those who didn’t make the trek out to Coachella this past weekend, the Santa Barbara Bowl provided an opportunity to catch a glimpse of that special music festival experience this past Saturday. Headlining the sold-out show was alternative EDM group Rüfüs Du Sol, accompanied by opening act, SG Lewis. Fresh off the release of their third album, Solace, Rüfüs Du Sol delivered an exciting performance in which fans of all ages could dance and let loose at this stop in their current world tour.

Opening the show was DJ, producer, songwriter and fellow EDM artist SG Lewis. Name sound familiar? Though he spent the night performing before Rüfüs Du Sol at the Bowl, Lewis has previously performed at The Hub on campus here at UCSB two fall seasons ago.

Originally from Britain, Lewis has begun to leave his mark in the United States with his moody yet dance-oriented remix tracks that blend quite well with the sometimes depressing yet also fun atmosphere of college. Like many other rising musicians in the age of the internet, Lewis began his music career by posting remixes and songs online until a loyal fan base was eventually established. After gaining some attention in 2014 for his remix of “You & I (Forever)” by Jessie Ware, Lewis was quickly signed to the British label PMR Records and has continued to grow since then.

As the music began to pour out of the speakers at the beginning of the night, SG Lewis stood behind his keyboard and entranced early concert-goers to the front of the stage. Though originally a solo act, Lewis was accompanied by a live band and female vocalist who performed alongside him.

While most people were just arriving or getting settled into their seats, Lewis provided a sound that was suitable for both those who wanted to sit and chill before Rüfüs and those who wanted to start dancing already. Performing new songs like “Throwaway,” which features indie-pop singer Clairo; “Hurting”; and “Aura” with a live band, Lewis reminded local Santa Barbarans exactly how much dedication he puts into producing and playing his tracks.

Once the sun set and SG Lewis finished his performance, the Santa Barbara Bowl became noticeably more crowded than before as anticipation for Rüfüs Du Sol continued to grow. Now almost in the 10th year of their career, Rüfüs Du Sol was first formed in 2010 by members Tyrone Lindqvist, Jon George and James Hunt. Although the trio is most famous in their home of Australia, with their debut album Atlas reaching the No. 1 spot on the Australian Albums Chart in 2013, Rüfüs Du Sol has since expanded their popularity all over the world. Since their debut, Rüfüs has performed in several international music festivals like the NSW Bluesfest at Byron Bay, Electric Forest Festival, Mountain Sounds Festival and even at Coachella on three separate occasions, including this year. 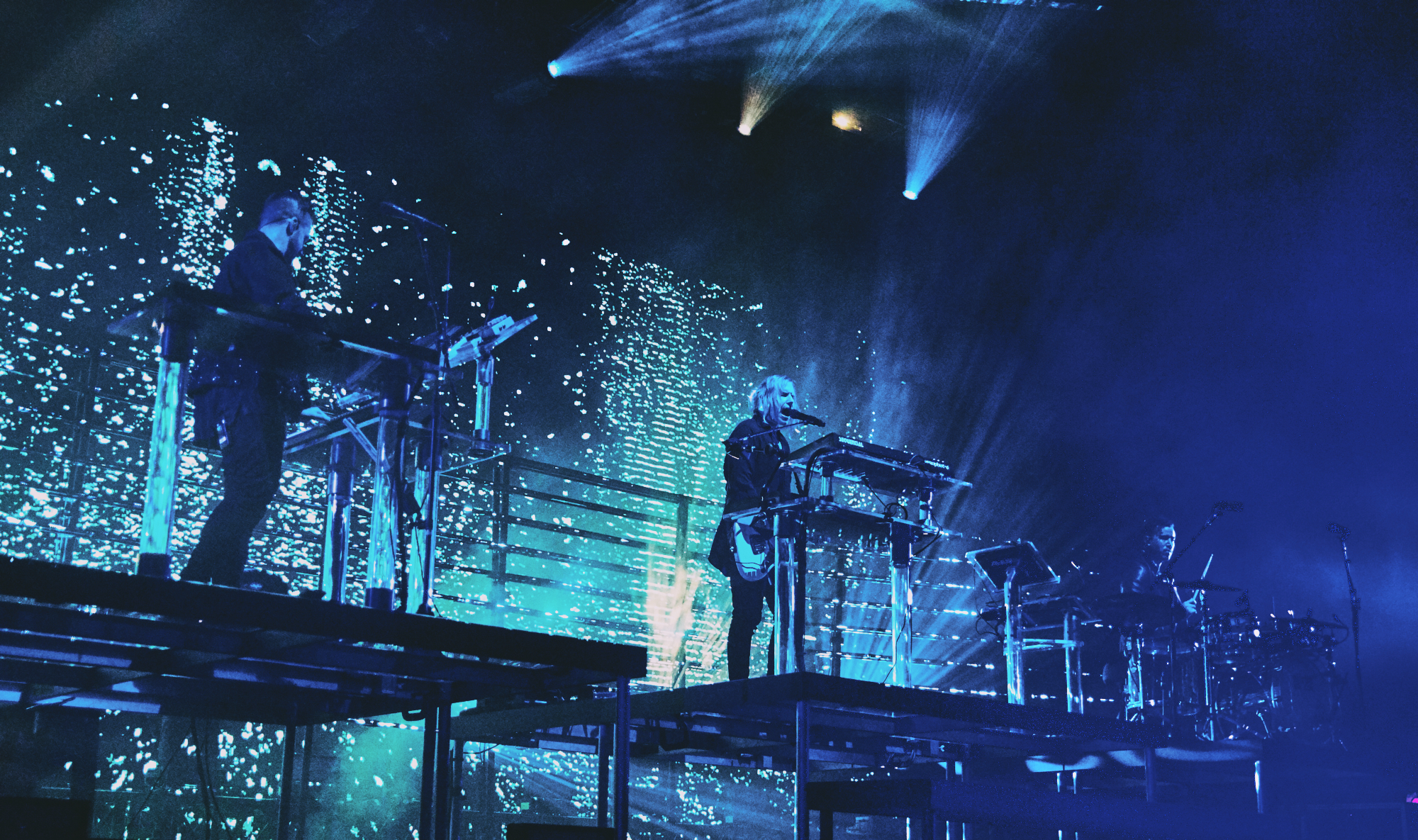 Finally, after a brief intermission, all the lights went black, and Rüfüs Du Sol took the stage. With flashing red lights synchronized to the beat of an unusually long introduction to their song “Eyes,” cheers from the crowd began to erupt once they recognized the familiar tune. From left to right was Jon George on keyboard, Tyrone Lindqvist on lead vocals and guitar and finally James Hunt on drums. Though originally performing songs from the electronic dance genre of music, like SG Lewis, Rüfüs performed with a complete band setup, leading to a more captivating performance than just a static DJ set. With all three members dressed in black from head to toe, Rüfüs Du Sol made it clear they’re more dedicated to the art of creating music rather than for the showiness of being famous musicians.

The night continued to unravel without a hitch as mysterious clouds of smoke hovered over the standing general admission area on this special April 20 evening of music. While everyone seemed to be having fun throughout each song, it was quite clear which songs of Rüfüs Du Sol’s were fan favorites. With the album release of Solace in late 2018, they have since become smitten with the new tracks “Underwater,” “No Place” and “Treat You Better,” all of which have recently made it onto U.S. Billboard Charts, unlike their previous singles.

In addition to playing these recent hits, Rüfüs performed older songs as well, like “Say a Prayer,” in which singer Lindqvist decided to abandon the stage and instead occupy a tall speaker located directly in front of the audience. It was during this moment that the loving relationship between artist and fan was most apparent, displaying to everyone at the Bowl just how appreciative Rüfüs is for their fame, success and support.

Toward the end of the show, lead singer Lindqvist addressed the audience and described the special place Santa Barbara has in their hearts. “This was the first city that we came to in the United States,” Lindqvist said.

“We’re from Australia. We made the big trip over here when I was about 21, and we visited a friend that was in college and had the best time here. We’ve got two beautiful days in this city; we’re going to enjoy it, and if you see us around say hello to us,” he concluded, continuing on with the illuminating night of music.