Short king and Twitter laureate extraordinaire Jaboukie Young-White graced the stage of I.V. Theater on Thursday night, bringing with him informative slideshows about “male feminizm” and which bugs are gay, amongst other “a-neck-dotes” which left the audience in stitches. 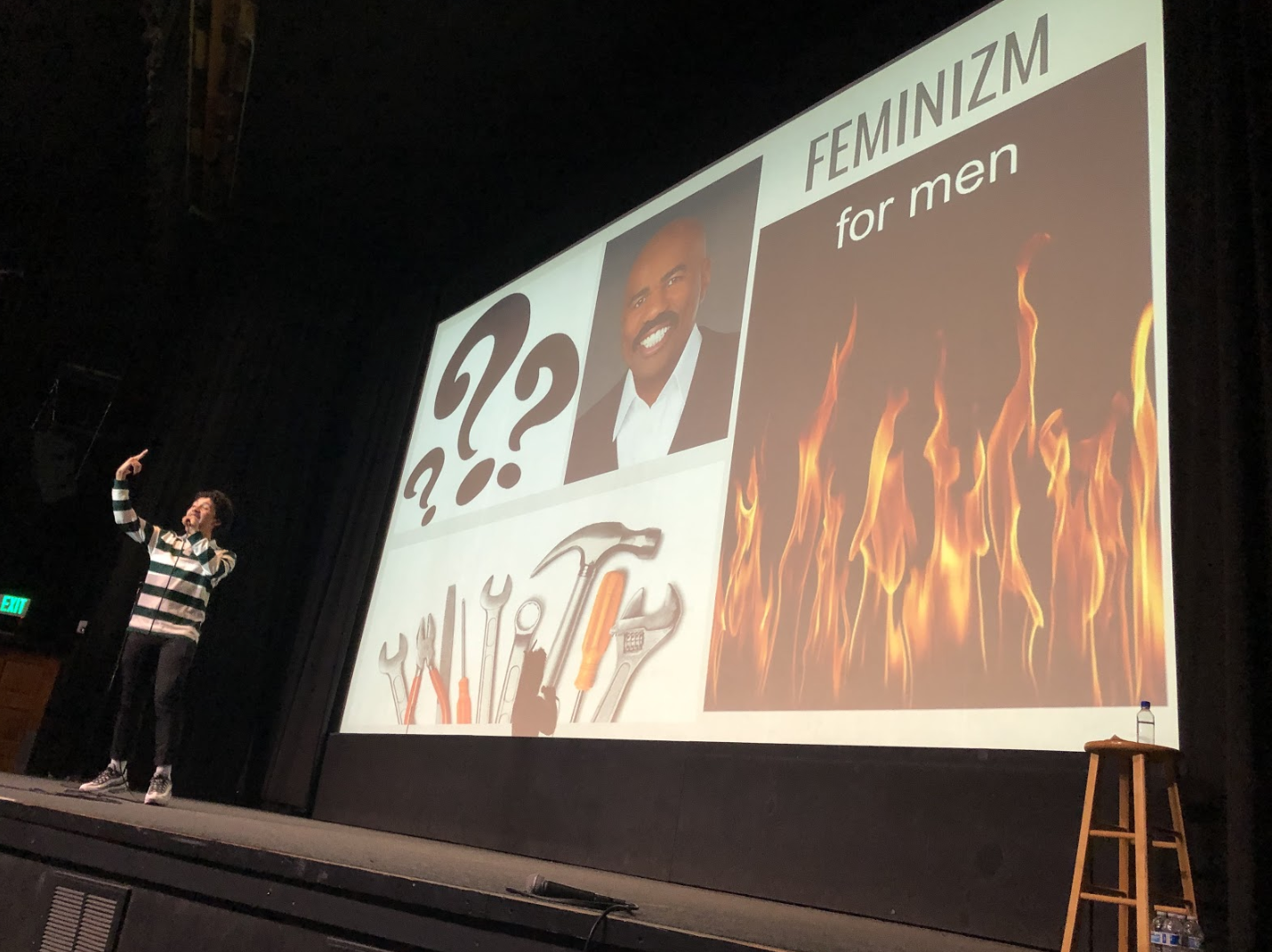 Opening for Young-White were UCSB alumni Matt Duckett and actor-comedian Moses Storm. Duckett recalled his days as an RA at FT (now known as Santa Catalina). He fondly told the audience of what he called an “I.V. Ambulance:” when two supporting residents wheel a passed-out person on a skateboard.

Storm joked of his shock at being in Santa Barbara. “There are a lot of 41-year-olds that are like, ‘We’re also here!’” he said. He also spoke of issues relevant to students, like dealing with dyslexia and growing up on welfare. Joking about Adderall – which he determined was cocaine, but blue – he said, “taking Adderall could convince me to do one of those escape room mazes after taking a bunch of laxatives.” Like many college students, Storm grew up in a food-insecure household, a name that he took issue with. “The name makes it sound cute. I’m starving, not bashful!” he cried.

Young-White took the stage to thunderous applause from the packed audience. Before getting down to business, he told the crowd that he had some important information to disseminate, while cueing up a slideshow about feminism. “With a bit of a twist,” he added, “Feminizm for men, hahahaha, sorry ladies!”

The slideshow went on to address the meaning of feminism. “It’s a question that’s on everybody’s brain,” he said. “Only Lena Dunham seems to know.” Young-White then walked into the audience and asked a male student when feminism began. “Before Christ,” he answered, to which Young-White responded by flipping to a slide of Beyoncé in 2013.

Young-White switched to talking about college life, poking fun at both liberal arts and S.T.E.M. students. “I love political science and history and all those things because you’re just studying drama and pettiness,” he said to laughter. Speaking to the non-humanities students, he proclaimed that, “S.T.E.M. people need to tone it down.”

Mocking the condescension that S.T.E.M. students notoriously rain down on liberal arts student, he joked, “I wish I could do what you do and read Clifford the Big Red Dog and make flower crowns all day but instead I have to make the A.I. robots that Amazon uses to beat their workers when they faint.” Concluding his bit on college, Young-White imparted his ultimate nugget of wisdom upon his collegiate audience: “… just cheat, honestly.”

Having grown up in Chicago, Young-White spoke of the transition he experienced when moving to Los Angeles. “Living in LA was hard because I don’t drive – because I am gay,” he explained. He told the audience how lucky they were not to live in the Midwest, explaining, that you could “drink a latte too fast and you wake up in your own flash mob proposal.”

Another highlight of Young-White’s set was his slideshow on which bugs are gay: “There’s not much research on bugs, but I’ve done some research of my own.”

“Every ladybug is a lesbian. They have bold red lipstick and then you zoom in and there’s Birks,” he said. “Beetles are also gay. That’s a strap,” he yelled, pointing at the horn mounted on a beetle. Perhaps one of his most profound distinctions was that between crickets and grasshoppers: “Grasshoppers are straight, crickets are gay. I say that mostly for Jiminy Cricket and his flair for the performing arts.” 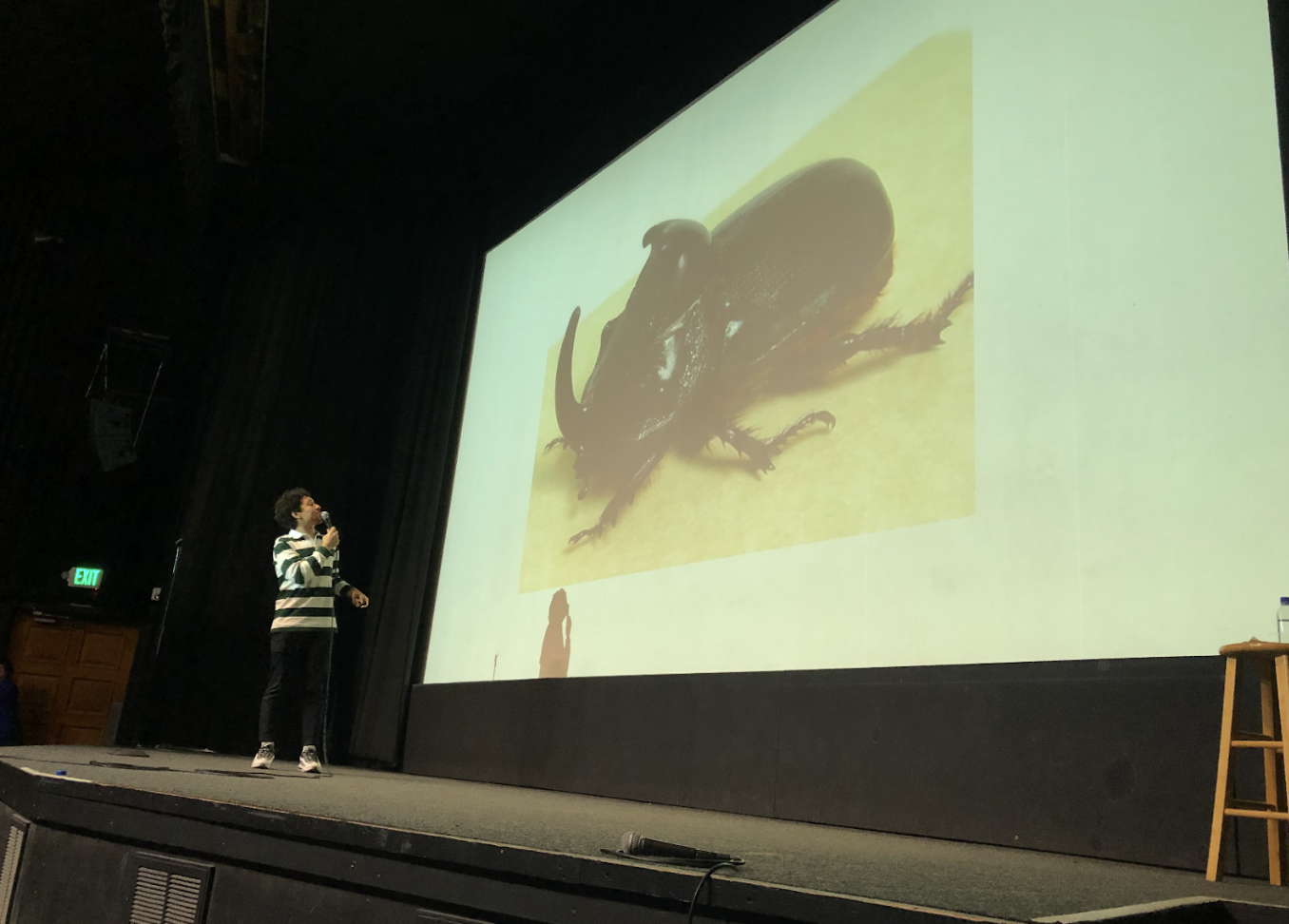 Young-White didn’t make it through his set without taking a few cracks at himself. “I’m small, pale and catty, like an inbred European prince,” he said to laughter from the crowd. “I could end a Republican senator’s career.”

Young-White’s stand-up was not only uproariously funny but filled with wisdom about parental acceptance, persistence, the mark of success and civil discourse. If you missed Jaboukie Young-White at I.V. Theater, you truly missed out. 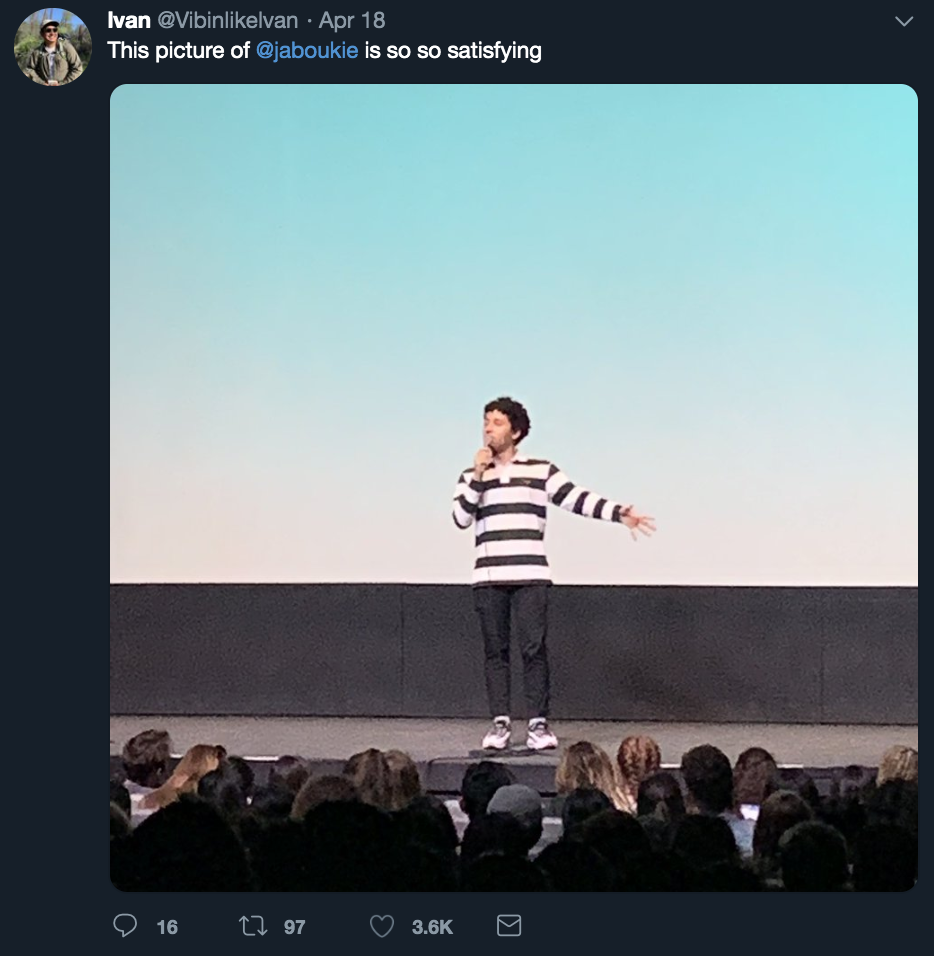