The forum for External Vice President of Local Affairs took place on Thursday, part of a four-day series of candidate forums hosted throughout last week. 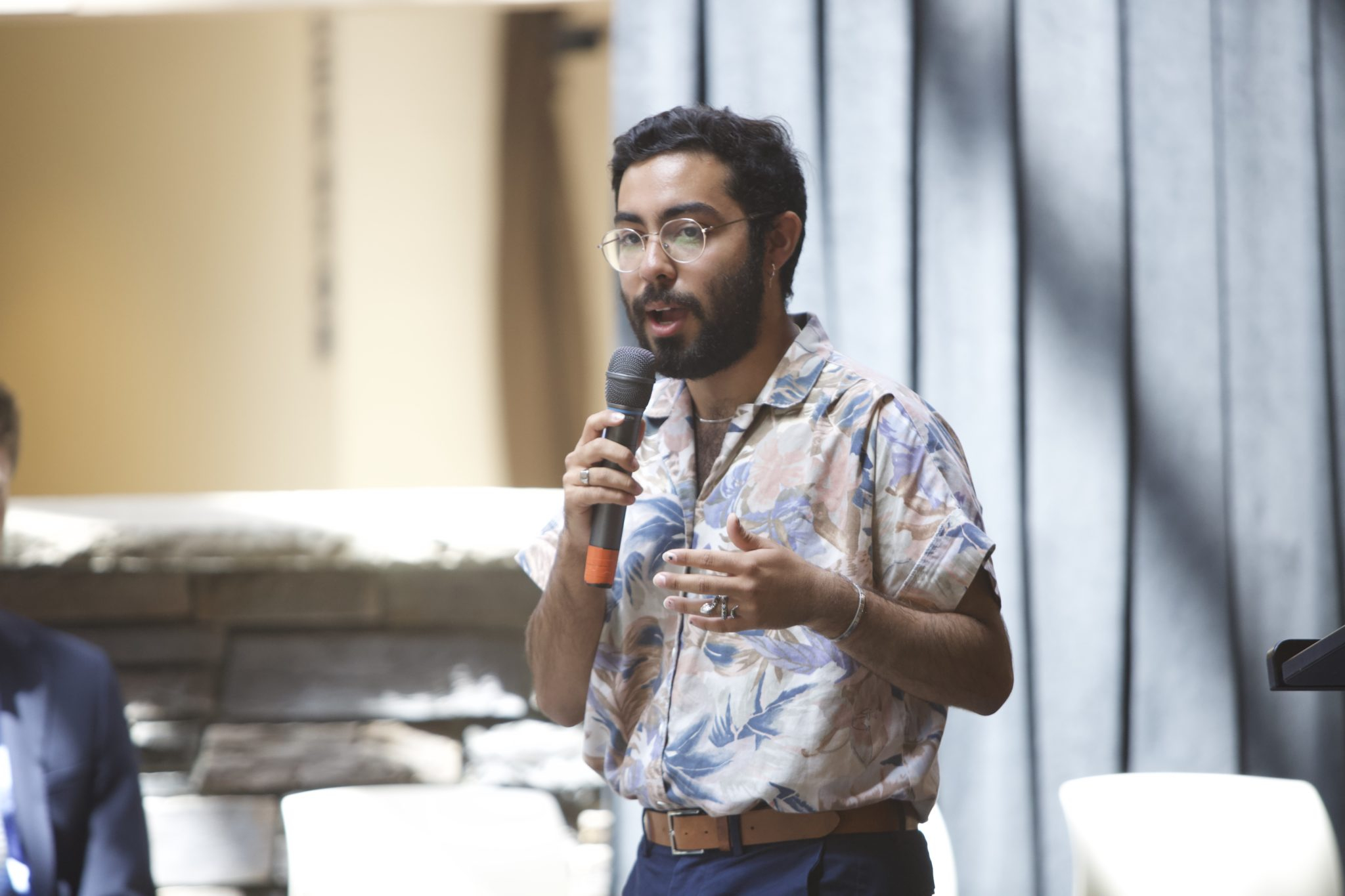 Ornelas spoke about his qualifications and goals if elected. Riley Esguerra / Daily Nexus

As the two shared the stage, Ornelas and Griffin took turns speaking to their experience and answered a multitude of questions regarding local affairs, their plans if elected and their past experiences and qualifications.

First on the list of questions was an opportunity for both candidates to speak about their past experience.

Griffin answered first, revealing that his involvement with a fellowship program kickstarted his A.S. experience the summer before his freshman year. Following his first year, he said he  “began to continue to fall in love with our community and work closely with the I.V. CRC, the Teen Center and Community Services District.” Furthermore, Griffin also worked to help students who were displaced by cliff collapses on Del Playa Drive.

Griffin also owns his own aerial photography company where he takes pictures for “landlords and property management services.”

Ornelas, a current off-campus senator, stated he is already working closely with the EVPLA office and is close friends with the current EVPLA, Jeike Meijer. Through his connections with the EVPLA and the office, Ornelas said “[Meijer is] constantly helping me learn more about her office and just the kind of work [that the] EVPLA should be doing, and how the EVPLA can be responsive to community needs.”

Ornelas placed a heavy emphasis on representing the diversity of the I.V. community, as “we are representing a diverse amount of people, both students and non-students… so it’s really important that you’re able to connect with different communities because we all share Isla Vista and it’s really pertinent to make sure that their voices are uplifted.”

One question posed by Elections Board referenced Wi-Fi in I.V. Parks; despite previous efforts, the implementation of free Wi-Fi in the parks has yet to see any tangible progress.

Ornelas provided two possible solutions: build routers into park benches or take advantage of “innovative companies that utilize satellites to ping Wi-Fi to certain areas.” However, Ornelas does not guarantee he will be able to make either of these undertakings happen, noting that the term length is not favorable to larger projects.

Griffin, on the other hand, believes this may be a better job for the I.V. CSD, where he has already established “creative relationships” with some of the directors, such as Father Jon Hedges. Griffin finds that the I.V. CSD would be a more appropriate place to take on the project because they have the “space for transition projects” which can be implemented over the “course of a few years,” he said.

Both candidates are familiar with the I.V. CSD, the local government representing I.V. But Griffin has worked closely with current I.V. CSD directors Ethan Bertrand and Spencer Brandt in the past; Ornelas admitted that he hasn’t “been super involved in their [I.V. CSD] meetings,” but plans to be more involved in the future.

As brought up by the Elections Board, community outreach is a cornerstone of the EVPLA position, as it is imperative to take into account the diversity of I.V. while also acting as a liaison between the community and the university.

Ornelas, who speaks fluent Spanish, stressed the importance of having a diverse office and proposed the idea of creating a community outreach team to better connect with the community.

Community outreach has a different meaning to Griffin, who has spent the past two years curating a series of interviews with long-term residents of I.V. called “The People of Isla Vista.” Griffin plans to continue this work, if elected, so he can devise a way to produce more inclusive programs that stretch out to those not necessarily affiliated with the school.

Street lighting, a contentious issue that seems to never be completely remediated, is seen as a problem by both Ornelas and Griffin, although their solutions are not the same.

Having had worked with the EVPLA office in the past, Griffin sees street lighting as a project for the I.V. CSD – one in which the EVPLA can help supplement.

“My plan would be to work with them [I.V. CSD]… to go out and find where more lights need to be implemented. And then working with the county and other organizations come up with a concrete plan to install lights in areas that are not fairly lit,” Griffin said.

Ornelas, on the other hand, is a fan of the ongoing efforts of the EVPLA office and its recent release of a street lighting expansion report. Ornelas believes the work should remain in the office to avoid “reinventing the wheel” and restarting the project somewhere else.

Ornelas also plans to collaborate with county supervisor Joan Hartmann to “represent our voices at the county level.”

With an increase in attendance but a decrease in arrests, the elections board asked if it may be possible to remove Deltopia’s festival ordinance in the future.

Both candidates agree that instead of abandoning the ordinance entirely, it should be adjusted and scaled down accordingly. Furthermore, Ornelas is weary that if Deltopia becomes a sanctioned, “actual event,” there is the possible repercussion that visitors from other colleges might see the change as a potential advertisement to draw attendance.

Griffin is opposed to advertising Deltopia as a real event as well, fearing that it will draw crowds from other schools who see it as an “exclusive event.”

Elections Board also asked if the candidates believe the community naloxone trainings implemented in I.V. have been successful in helping residents learn how to use naloxone.

Both candidates are in favor of seeing the program expand more. Ornelas, who has attended a training, plans to push for Community Service Officers (CSOs) to also have naloxone on hand, as they currently do not.

When asked about their plans to fight against sexual assault, Griffin and Ornelas proposed different approaches to the situation.

Ornelas believes the best approach is to listen to the needs of the community. He also cited “really close relationships with folks in students against sexual assault” and the fact that Standing Together To End Sexual Assault (STESA), a college advocate program for sexual assault survivors, recently approached the I.V CSD for funding.

Griffin plans to work directly with the I.V. CSD to implement more Green Dot trainings, which help educate students on sexual assault and violence. On top of that, Griffin also hopes to bring the Blue Light system to I.V., which he believes will make the community feel safer at night and speed up police response times by having numerous emergency alarms around I.V. that will alert police if activated.

Last on the list of questions was the subject of food insecurity and its disproportionate effect on marginalized students.

Ornelas placed a heavy emphasis on strengthening the services of the A.S. Food Bank and CalFresh. As a vice chair on A.S. Finance and Business, Orneals stated that “there’s honestly a lot of room for improvement in how money can be used more efficiently. So really making sure that we’re reevaluating the budget and allocating that to programs that people really need.”

Griffin is in favor of expanding the services of the A.S. Food Bank because he feels “not everybody can access it or not everybody knows about it, who is food insecure.” He would also like to work with local grocery stores to create a food bank that gives nearly-expired food for free to students.

Correction [7:10]: Ornelas’ name was spelled incorrectly in a previous version of this article due to an editing error.