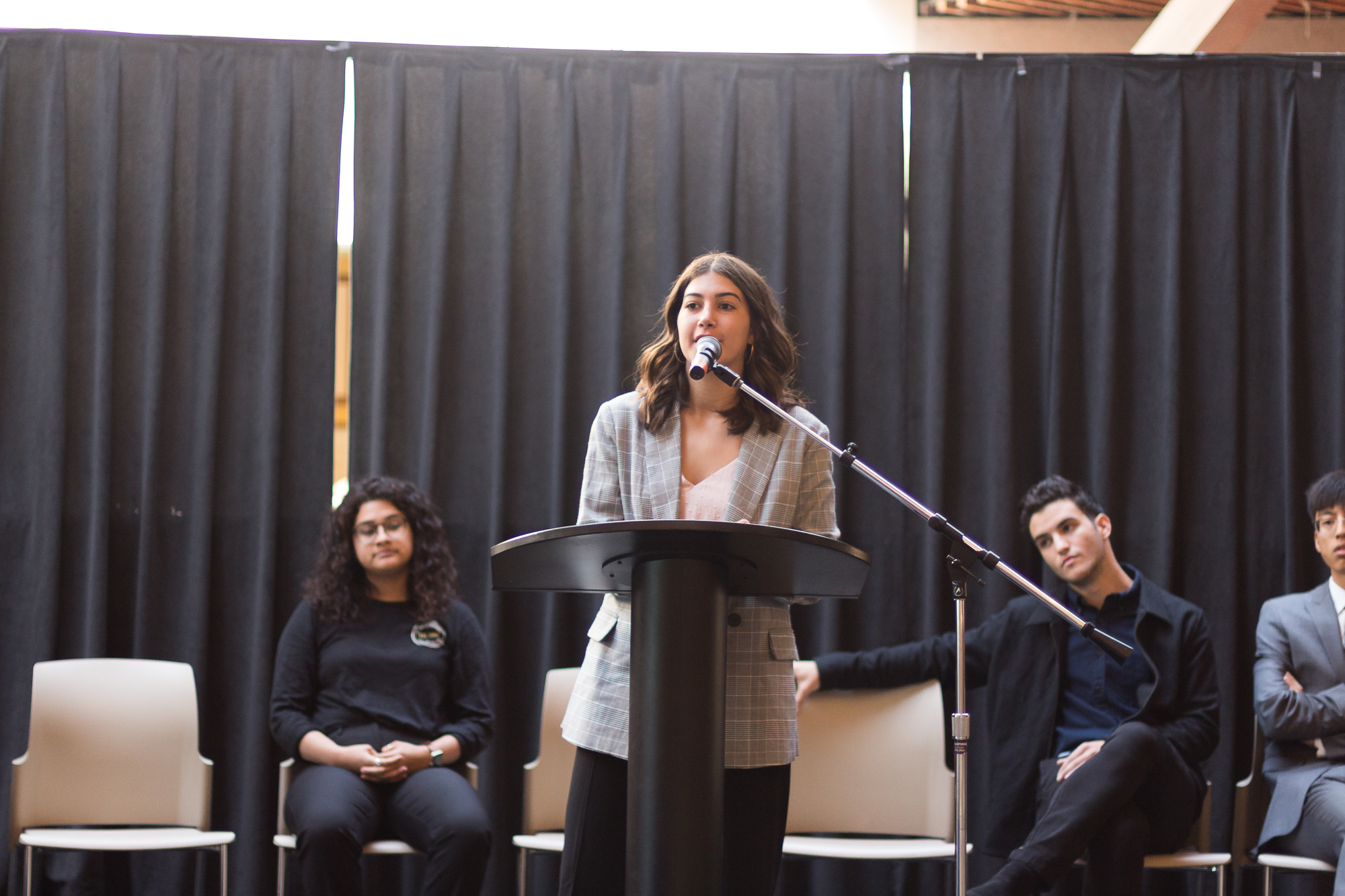 The collegiate senators spoke in the Hub on Tuesday. Andrea Verdugo / Daily Nexus

The Isla Vista Party’s candidate for the College of Engineering is Dylan Kupsh, while Campus United’s candidate is Alan Lim.

Responses to the issues presented by the questions, as well as candidates’ general goals, are summarized below:

Lim, a first-year chemical engineering major, believes that the greatest issue facing students in the College of Engineering is the stigma regarding mental health services. He said that, if elected, he wants to promote mental health awareness and wellness campaigns. Lim added that he is currently a part of the AIChE club at UCSB, which is a chemical engineering club; through that, he has experience in communicating with professors and students within his college.

He also wants to make a phone app geared toward S.T.E.M. and engineering students that would compile an inventory of different resources on campus that are “available to help people with their academic studies.”

Reyes Carrillo, a fourth-year computer science major, said the greatest issue facing students in her college is accessibility to certain technologies. If elected, Reyes Carrillo plans to advocate for lendable laptops and 3D printers. Reyes Carrillo also said that she believes the two-party system should not exist, which is why she chose to run independently.

In terms of how Reyes Carrillo would uplift the voices of LGBTQ students in her college, she mentioned the need for advocating for organizations such as oSTEM, which is an organization at UCSB aimed at promoting and supporting LGBTQ individuals in S.T.E.M. fields. Reyes Carrillo added that she believes the College of Engineering should have two senatorial seats.

College of Letters and Science Candidates:

Danielzadeh, a second-year psychological and brain sciences major, said the greatest issue facing students in her college is over-enrollment. Danielzadeh wants to modify G.O.L.D. and update the waitlist system so that students with “upper standing who need certain classes to graduate on time have priority.”

When meeting with the deans of the College of L&S twice a quarter if elected, Danielzadeh hopes to “encourage the addition of new majors that are more fit with our current job market and what our generation is actually interested in.” Danielzadeh didn’t specify exactly which majors she would like added. She also wants to improve Campus Learning Assistive Services (C.L.A.S.) by offering one-on-one affordable tutoring for students.

Campos, a third-year sociology major, said the greatest issue facing students in the College of Letters & Science is that the college does not have enough resources. Campos hopes to form a committee with honors students from different departments to “ensure that every student feels that their major concerns are being voiced.”

If elected, Campos also wants to find a solution regarding textbook affordability by working with department heads and administrators on campus to gain funding to expand course reserves in the library.

Chocron, an undeclared second-year, also believes that awareness surrounding mental health is the biggest issue facing students in his college. Chocron mentioned his involvement in Hillel, the Public Safety Commission and the Interfraternity Council, citing his ability to work with a variety of groups at UCSB and in Isla Vista.

Regarding the recent instances of antisemitism at UCSB, Chocron said that one solution is to hold “open spaces where leaders on our campus are able to educate students on the issue and let them form their own response and come up with their own ideas as to how they feel and what they should do.” He Chocron then emphasized that one of his biggest platform points is to ensure the safety of students and faculty at UCSB; he also said that UCSB needs to do a better job of making sure that students and faculty are aware of emergency policies.