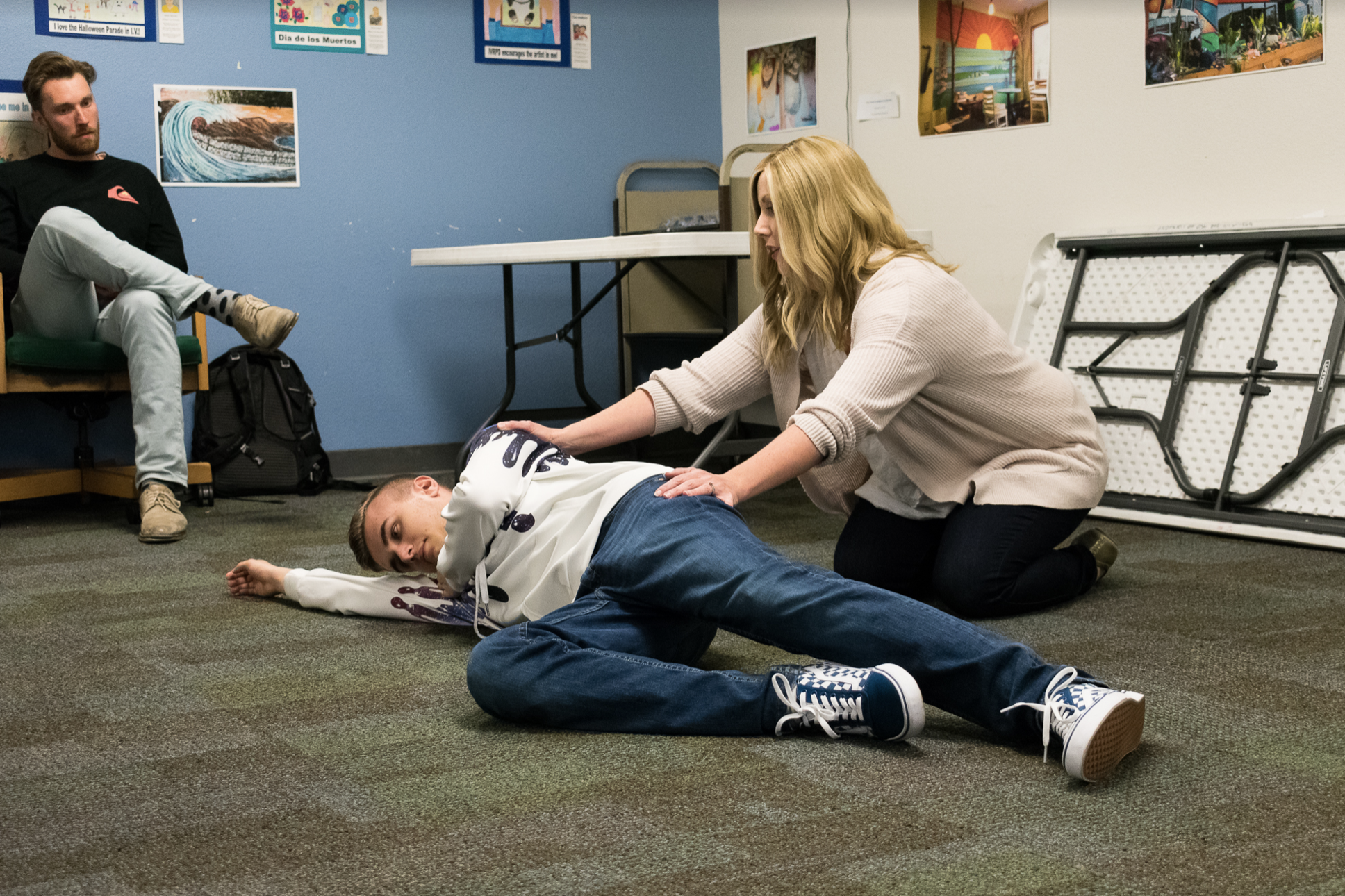 Bryan demonstrated the use of Naloxone by asking an attendee to volunteer to lie on the ground acting as an individual who overdosed. Ida Kazerani / Daily Nexus

Attendees were trained on how to prevent, recognize and respond to an overdose by using Naloxone, the opioid overdose reversal drug. Naloxone is a medication that temporarily blocks the opioid receptors in the brain and keeps the opioid from being able to attach to those receptors.

At the end of the training, free Naloxone nasal spray kits were handed out.

About 45 students and community members were present at the first training on Tuesday. The second training will be held on Thursday, April 4 at 7 p.m.

The start of the trainings follows a public health announcement sent out by Vice Chancellor for Student Affairs Margaret Klawunn and Dean of Student Life Katya Armistead on March 20. The announcement said that in the past few weeks, “three Isla Vista residents suffered from an apparent overdose of opioids,” and while two were revived with the use of Naloxone, the third did not survive, according to the Santa Barbara County Sheriff’s Office.

UCSB’s Director of News and Media Relations Andrea Estrada later clarified to the Nexus that the overdose resulting in death did not occur in I.V. , and the individual was not an I.V.  resident, as had been stated in the announcement sent out to all UCSB students.

The trainings, however, were not held as a result of the most recent overdoses, according to Angie Bryan, the recovery program manager and a recovery specialist for UCSB’s Alcohol and Drug Program. In fact, planning for the trainings has been in the works for a little over a year.

Bryan first proposed an overdose prevention protocol to Student Health during March 2018, and the standing order was approved by the director of behavioral health in October of 2018, Bryan said in an email.

Bryan was approved for a Naloxone grant through the California Department of Public Health’s Naloxone Distribution Project in November 2018, and received a supply of Naloxone in December 2018.

“I’ve been a counselor at UCSB for almost 15 years,” Bryan said at the beginning of the training. “Naloxone is something I’m really passionate about in terms of making sure that we get it into as many hands and homes as possible because I think it’s important for students to feel empowered to do something.”

“Students are the ones that are gonna be there in those first moments that an overdose might happen.”

Bryan discussed preventative measures that students could take, such as using fentanyl test strips and various drug testing kits that can test for a range of substances, along with how to reduce the risk of using certain substances.

She then asked attendees for what they think signs of an overdose are, to which attendees responded with an individual being unresponsive, having pinpoint pupils and having discoloration of the skin.

But even after Naloxone is administered, 911 still needs to be called, Bryan explained.

Bryan demonstrated the use of Naloxone by asking an attendee to volunteer to lie on the ground acting as an individual who overdosed. She then went through the hypothetical motions of using the nasal spray on the volunteer.

Bryan said that all law enforcement officers and paramedics in I.V. carry Naloxone, including UCPD and the I.V. Foot Patrol, and emphasized that a person who calls law enforcement in response to an overdose cannot be charged with a misdemeanor crime of possession or being under the influence.

However, that is not the case for felony-type charges, Bryan said. For example, if one has an excessive amount of drugs that seems like an intent to sell, law enforcement could investigate that.

Jeike Meijer, the Executive Vice President of Local Affairs (EVPLA), collaborated with Bryan on the trainings after Bryan received the Naloxone grant.

“We sat down, we had a meeting, we kind of tried to think about when would be the best time to have [the trainings], and we thought before Deltopia was the best,” Meijer said.

Meijer said preparing students for overdose situations as opposed to just discouraging drug use is a more effective route for keeping students safe.

“I think it’s really important to not just say ‘don’t do drugs,’ because people will do it, and it’s good to know how to be safe in the case of an emergency,” Meijer said. “Even if you don’t think that you’ll be using opioids, you might have a neighbor, or a housemate [who does].”

Meijer added that the public health announcement sent out to UCSB students which mentioned the recent opioid overdoses reiterates the necessity of Naloxone trainings.

“I’m hoping that conversations and de-stigmatization… will allow people to get the help they need.”

Along with Bryan, Meijer also hopes to help with more Naloxone trainings in the future.

“There’s always people working on projects and there’s always someone who’s going to know more than you, and you have to know when to step back and let them take the wheel but give them all of the power you have,” Meijer said. “I don’t know how to do the trainings, but I can give the space.”