I hate to break it to you, but if you have ever said the words “nice guys finish last” and meant it, you are probably not a nice guy. If you have ever used that excuse to cover for the fact that you didn’t get to hook up with the person you intended to, because that’s what you consider to be “finishing last,” you are definitely not a nice guy. Like my friends, roommates and everyone else I’ve asked about it so far, I really take issue with the concept of nice guys — or any nice person — finishing last because it’s just plain not true, and those who genuinely employ it in their lives point to a fundamental problem in the way we see romantic partners.

On a base level, the assumption is that “finishing last” means not getting with the chosen partner in a romantic, namely sexual, capacity. That should be highly disturbing to anyone who believes in the right to say no to unwanted sex, because it means the person of interest is only good for one thing and becomes pointless if they can’t be scored. Objectification of that caliber is exactly why toxic masculinity — used here to represent the pressure placed especially on men to solidify their masculinity by accumulating seuxal prowess — exists, and can be forced upon anyone, not just women. The only positive thing about hearing the words “nice guys finish last” as justification for some dude not getting laid is that somewhere out there, a girl or guy didn’t get forced into non-consensual sex, even if it means listening to that self-proclaimed “nice guy” bitch and moan about it for a whole week. 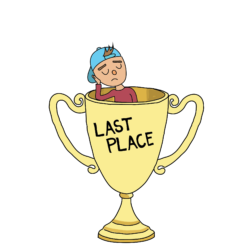 Letting go of the ego long enough to realize there’s a plethora of reasons for someone to turn down a hookup or romantic relationship besides objective “niceness” can be really difficult for some poor souls. Built upon the foundation that sex is the only positive outcome for being attracted to someone now stands this horrid notion of obligation. It’s commonly assumed that being polite and considerate — a “Nice Guy” type — to another person warrants the return of romantic interest regardless of any other factors, and thus the dreaded “friend zone” was born.

Thinking of oneself as being stuck in the friend zone can quickly become a one-way ticket to using that vile phrase which I don’t even want to repeat again. This is arrogance hiding in plain sight, assuming that the only grounds the targeted person could possibly have for rejection are someone being too nice, too generous, having a penchant for bad boys and assholes who treat them like dirt. That’s a cute excuse, and I’m happy for you if you think so highly of yourself, because the truth is probably that he/she is just not that into you.

It’s always seemed clear to me that the line separating friends from more-than-friends is physical attraction, which is why the concept of a friend zone somewhat baffles me. If that attraction is mutual, no one is going to be unwittingly hurtled into a platonic black hole with no hope of escape on account of friendship. There’s always a reason, even if the Nice Guy card gets played validly — which only comes around maybe as often as actual nice guys/girls/people do, a.k.a never.

Let’s get hypothetical (bear with me here): you get a cute little crush on a certain someone. You’re sweet to them, you’re considerate, you’re funny and when it’s time to shoot your shot they slap a “friend zoned” sticker on your forehead and call it a day.

First of all, if you’re only being a good person in anticipation of a payout rather than just to be an actual good person, I couldn’t condone anyone getting involved, anyway. Being a friend shouldn’t feel like finishing last.

This Nice Guy complex has brought modern romance down an unfortunate road, rife with objectification and arrogance bordering on narcissism. It has also sponsored the horrors of incel culture. Incel, short for involuntarily celibate, basically defines someone who takes “nice guys finish last,” and its connection to sex as an expected reward for being a decent person too far.

More importantly, it sounds like you weren’t their type. No, I did not just say that you were ugly. You could be an angel carved out of solid gold and someone out there still won’t be into it because, like it or not, everyone’s got a different set of turn on and turn off buttons that don’t all depend on appearance as a basis for attraction. It has nothing to do with your overall worth, and certainly not with whether or not you’re a nice guy/girl/person, so for the love of all that is good and pure please stop trying to use that as an excuse.

This Nice Guy complex has brought modern romance down an unfortunate road, rife with objectification and arrogance bordering on narcissism. It has also sponsored the horrors of incel culture. Incel, short for involuntarily celibate, basically defines someone who takes “nice guys finish last,” and its connection to sex as an expected reward for being a decent person too far. That phenomenon continues to have catastrophic consequences in the name of incel communities which, comprised of primarily men, strategize how to trick or even force their way into the bed of someone they believe owes them sex. They get violent, they get twisted and they want to get even, turned into ticking pipe bombs by toxic masculinity and the devolving of sex into a form of currency.

I know, I know, it’s a long way from that harmless little phrase to organized attacks. But I also know that incel culture once had poisonous roots in Isla Vista. That slope is slippery, and I don’t imagine anyone would want our community standing anywhere near it.

Nice Guys, kindly get over yourselves and start being real nice guys, or girls, or whatever you want to be. That part doesn’t matter, so long as the respect and kindness toward others remains the same and the victimization gets checked at the door. The only way to finish last is to demean someone else on the basis of entitlement, because arrogance like that is easy to spot when it’s being broadcasted as a one-line sob story to anyone who will listen. There is no first place, there is no last, there are no trophies and there are no medals. There is only how we treat each other.

Jordan Curiel really wants to know when being nice became synonymous with trying to get laid.

I agree that men shouldn’t use the phrase “nice guys finish last,” but for entirely different reasons. It is absolutely true that many girls go for the frat boys who’ll treat them like dirt, and they’ll ignore the potentially great guys in their lives because they aren’t 6’2, have six-pack abs, or are a little on the reserved side. These decent guys will then see their crushes go out with and get hurt by dirtbags who don’t care about them, and it’ll sting a little bit. I think that true nice guys, and there are losers who pretend to be… Read more »