The Daily Nexus
Sign of the Times
What’s the Real Cost of a Strawberry?
March 19, 2019 at 7:00 am by Amarica Rafanelli

Most Americans don’t think twice about where their food comes from. We top our açai bowls with strawberries and slather our corn cobs with butter but rarely consider the real cost of getting those foods to our plate. As a nation, we are more disconnected from our food than ever.

Clearly, strawberries aren’t born in the grocery store. They have a long journey before they make it to their chilled home on aisle four and into our breakfast bowls. Strawberries, like all of our fruits, vegetables, grains, dairy and meat, come from a farm.

Farming is a big part of our economy in the U.S. One percent of the United States’ annual GDP. The $136.7 billion industry employs nearly three million people, most of whom are immigrants. 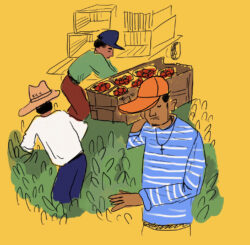 The US agricultural industry would literally collapse without immigrant labor. 73 percent of all U.S. farm workers crossed a border to get here, with a majority coming from Mexico. An estimated 60 percent of all farmworkers are undocumented or lack legal authorization to work in the U.S. That means that of the three million people working on America’s farms, roughly 2.3 million are immigrants and 1.4 million aren’t legal residents. The United States’ agricultural industry is powered by immigrants whose status makes them vulnerable to exploitation and poor working conditions.

Historically speaking, this is nothing new. The United States farm industry has been exploiting the work of vulnerable immigrant groups since its beginning. During the 1960s, the work of activists like Dolores Huerta and Cesar Chavez brought attention to the exploitation of America’s farm workers and helped create the first union dedicated to protecting their rights, the United Farm Workers of America (UFW). Despite their efforts, farm workers continue to be one of the most unprotected groups of workers in our nation.

Farm labor is grueling work. The typical farm worker is on their feet 10 hours a day performing physically demanding tasks in harsh outdoor conditions. It’s common for workers to sustain injuries on the job because of the repetitive motion of picking crops, lifting heavy bins and exposure to pesticides. Farm workers are only legally entitled to one 10-minute break every four hours with a lunch break in between, amounting to a meager 50 minutes of rest over a 10-hour work day.

Though farm workers put in just as many hours — or more — as the average American worker, they don’t have the same protections. The Fair Labor Standards Act (FLSA) was a bill passed by Congress in 1938 that guarantees workers minimum wage and overtime pay. Workers protected by the FLSA can take legal action against their employers if they fail to comply with FLSA requirements. However, the FLSA doesn’t do much — if anything — for the nation’s farm workers. 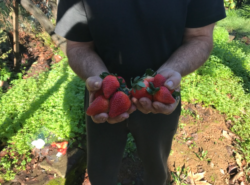 A farm worker in California. Photo by Amarica Rafanelli.

Though farm workers are technically entitled to receive minimum wage under the FLSA, most don’t qualify. FLSA protections do not apply to seasonal workers, those who work on small farms or undocumented workers. According the National Center for Farmworker Health, 84 percent of all farm workers are seasonal. Although this group has gained some legal protections with the passage of the 1983 Migrant and Seasonal Agricultural Workers Protection Act (MSPA), there’s a serious loophole. The law only guarantees minimum wage to seasonal workers on large farms with more than seven full-time workers. Since the majority of seasonal farm work takes place during a select few months, employees rarely qualify as full-time workers. This means most seasonal workers aren’t entitled to receive minimum wage because they are working on “small farms.”

And what about the FLSA’s overtime provision? All farm workers — seasonal, full-time and undocumented — are completely exempt. In every state but California, farm employers aren’t required to pay their workers overtime for working a 40-plus-hour week.

That carton of strawberries is starting to cost a lot more than $2.51. In order to produce just one box of strawberries, thousands of farm workers and their families are living in poverty. The median annual wage for an agricultural worker is $23,730, and the federal poverty line for a family of four is just a hair below at $22,050. According to the United States Department of Labor, 33 percent of all farm workers and their families are living below the poverty line.

A number of obstacles prevent farm workers from accessing effective healthcare, making it so that many suffer from treatable health conditions. Under the Affordable Care Act (ACA), employers with fewer than 50 full-time employees are not required to provide their workers with health insurance. This means workers on small farms aren’t covered. Additionally, migrant farm workers who work seasonally are not entitled to health insurance. Under the ACA, these workers can buy private insurance plans from health insurance marketplaces if they are in the country legally, but the 1.4 million farm workers who are undocumented don’t qualify for coverage.

Farm workers that do qualify to buy private insurance face a number of obstacles to getting covered. Language barriers and low literacy make it difficult for many to sign up for the ACA. And if these workers manage to sign up, their limited means of transportation often prevent them from taking advantage of their healthcare services.

The workforce supporting one of our nation’s biggest industries lacks access to a basic human right: decent healthcare. We may only pay $2.51 for a carton of strawberries, but three million people and their families pay much more in untreated illnesses, chronic health problems and injuries.

An estimated 60 percent of all farmworkers are undocumented or lack legal authorization to work in the U.S. That means that of the three million people working on America’s farms, roughly 2.3 million are immigrants and 1.4 million aren’t legal residents. The United States’ agricultural industry is powered by immigrants whose status makes them vulnerable to exploitation and poor working conditions.

President Trump’s immigration policies have created serious labor shortages in California as fewer immigrants are crossing the border to work on California’s farms. The state’s 77,500 farms produce two-thirds of the nation’s fruits and nuts. The total value of California’s agricultural production comes out to $59 billion a year. But our nation’s agricultural powerhouse is facing a problem. In 2017, 55 percent of California’s farmers said they didn’t have enough workers to get through the season. In order to recruit more workers, California is adopting kinder labor laws. Last month, California passed a law that would allow farm workers to collect time and a half after working 9.5 hours a day, or 55 hours a week. For now, the law only applies to farms with 26 or more employees, but starting in 2022 smaller farms will also have to comply with the new rules.

Progress is happening at the national level as well. Last month, California lawmakers introduced a bill that would make it easier for undocumented immigrants to become legal residents. The Agricultural Worker Program Act of 2019 would allow farmworkers who have worked in the field for at least 100 days in the past two years to apply for a card that will allow them to work legally in the U.S. Once workers receive the card, they would be able to apply for permanent residency and eventual citizenship. If the bill passes, more farm workers would become eligible for all of the benefits that come with citizenship, like the right to buy health insurance or receive minimum wage.

The burden of producing our nation’s food can’t just fall on the back of our farm workers. It’s time we pay more than just a few dollars for the produce that fuels our nation. We must organize, we must protest and we must demand that our farm workers are afforded the same basic protections as every other worker in America. Today a carton of strawberries might only cost $2.51, but one day soon we are going to have to pay up.

Amarica Rafanelli is a dedicated champion of labor laws that respect the worth and dignity of every individual worker.

Guess I’ll stop buying berries when I have to pay 3 times the price.

Seriously – these labor laws were put in place for a reason. Unless we do away with capitalism, some people will make more money (and receive better benefits) than others. These farm workers are making more money than they would if they were living in Mexico or Central America. Nobody is putting a gun to their head and forcing them to do the work.

What kind of an argument is that

Do you eat the leaves and stem?