The Daily Nexus
News
Over 200 People Attend Vigil in Solidarity With Muslims of New Zealand
March 18, 2019 at 8:16 pm by Simren Verma and Sanya Kamidi 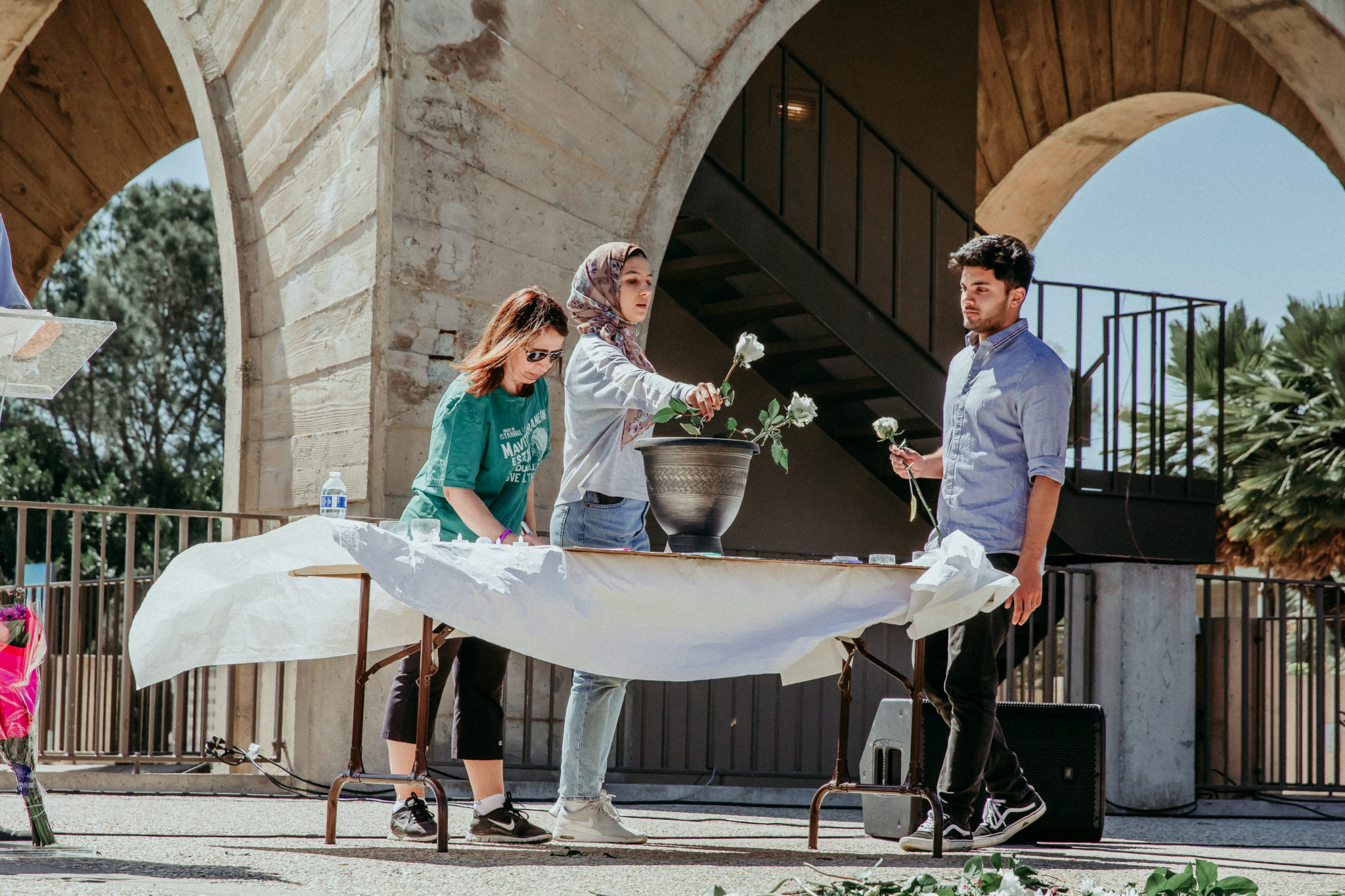 As each victim’s name was read during the vigil, each rose was placed in a vase in the center, for a total of 51 white roses. Angie Banks / Daily Nexus

On Monday afternoon, UCSB’s Muslim Student Association (MSA) hosted a vigil to honor the lives lost in New Zealand during the terrorist attack in Christchurch.

A common sentiment was expressed throughout all of the speeches: Love will overcome hate and fear.

“The last few days have been heartbreaking for a lot of us,” MSA Vice President Sufia Hasan said. “This slaughter of innocent lives was intended to be publicized, as it was live-streamed by the murderer with the intent of striking fear into people’s hearts.”

“For this reason, it is best not to fall into the trap of focusing our attentions on the killer and the details of his crime, but instead on the unfortunate victims of this tragedy.”

Rabie, a fourth-year hydrologic sciences and policy major, spoke of the many purposes behind the vigil.

“It is to remember and honor the 51 beautiful people that the world lost due to a monster,” he said.

“It is to gather with each other and unite as one as we offer sincere condolences for one another, as many people standing today are feeling sadness, anger and confusion.”

“It is to help relieve our heartaches and to show solidarity to all the families facing this tragedy. It is to admire the heroics of some of the martyrs who sacrificed their lives to save others.”

Professor Butch Ware, who teaches African history and the history of Islam at UCSB, began his speech by saying that the “topic of today’s brief address is love.”

“Only love is capable of conquering hate, and the reminder comes from the Quran, the book brought by the Prophet Mohammad believed by Muslims to be God’s verbatim speech,” Ware said.

“What kind of sense does it make for beings made of dirt to rank one another hierarchically above other beings made of dirt?” he asked. “The Quran reminds us over and over again that we were brought out of this earth and will be put back into it … White supremacy is the greatest historical expression of Satan’s own religion.”

“We need to counter the white supremacist ideology that fueled this horrible attack… No excuses and no tolerance can be given to white supremacy.”

Later in the vigil, 51 attendees lined up on either side of Storke Tower, each holding a white rose. As each victim’s name was read, each rose was placed in a vase in the center, for a total of 51 white roses.

Vice Chancellor for Student Affairs Margaret Klawunn, who spoke following the victims’ names being called, noted that this May marks five years since the 2014 tragedy in Isla Vista, when six people were killed.

“As a community that knows the profound impact of hate armed with guns, we at UCSB also know how important it is to stand with and for each other at moments when hate threatens — whether it is sexism as it was in Isla Vista in 2014 or Islamophobia as it is today, we need to speak up and speak out against intolerance,” Klawunn said.

“We need to counter the white supremacist ideology that fueled this horrible attack,” she added. “No excuses and no tolerance can be given to white supremacy and we are seeing the danger in allowing even its smallest manifestations to pass.”

Klawunn also referenced a call for gun control, which drew applause from the crowd. She said she hopes the United States follows the steps that New Zealand is taking “so that it will not be so easy for those who want to commit terrorism in the name of hate to get weapons.”

“This hurts,” Dean of Student Life Katya Armistead said. “I’m grieving … as a mom to 23,000 students, as a colleague, as someone who has Muslim friends. I’m looking for hope. I see that in all of you.”

Chancellor Yang spoke of denouncing “this vicious attack” and standing in solidarity with the Muslim community.

“The impact of this horrible attack halfway around the globe reverberates on our campus.”

The vigil ended with a Janazah prayer and a silent march to the MultiCultural Center.

For MSA President Huda Faiz, infusing the vigil with Islamic traditions was important.

“Typically in Islam we don’t use, like, candles … that’s more of a Christian thing,” she said. “It’s fine if we use candles, but it’s just that we wanted to do something that was authentic to our faith. Not a lot of people know, ‘How do Muslims grieve when a person passes away?’ ”

She and the other organizers made it a point to incorporate aspects of Islamic funeral rituals, both with a Janazah prayer and by having an active member of the MSA’s mosque read Qur’an verses and perform a du’a. 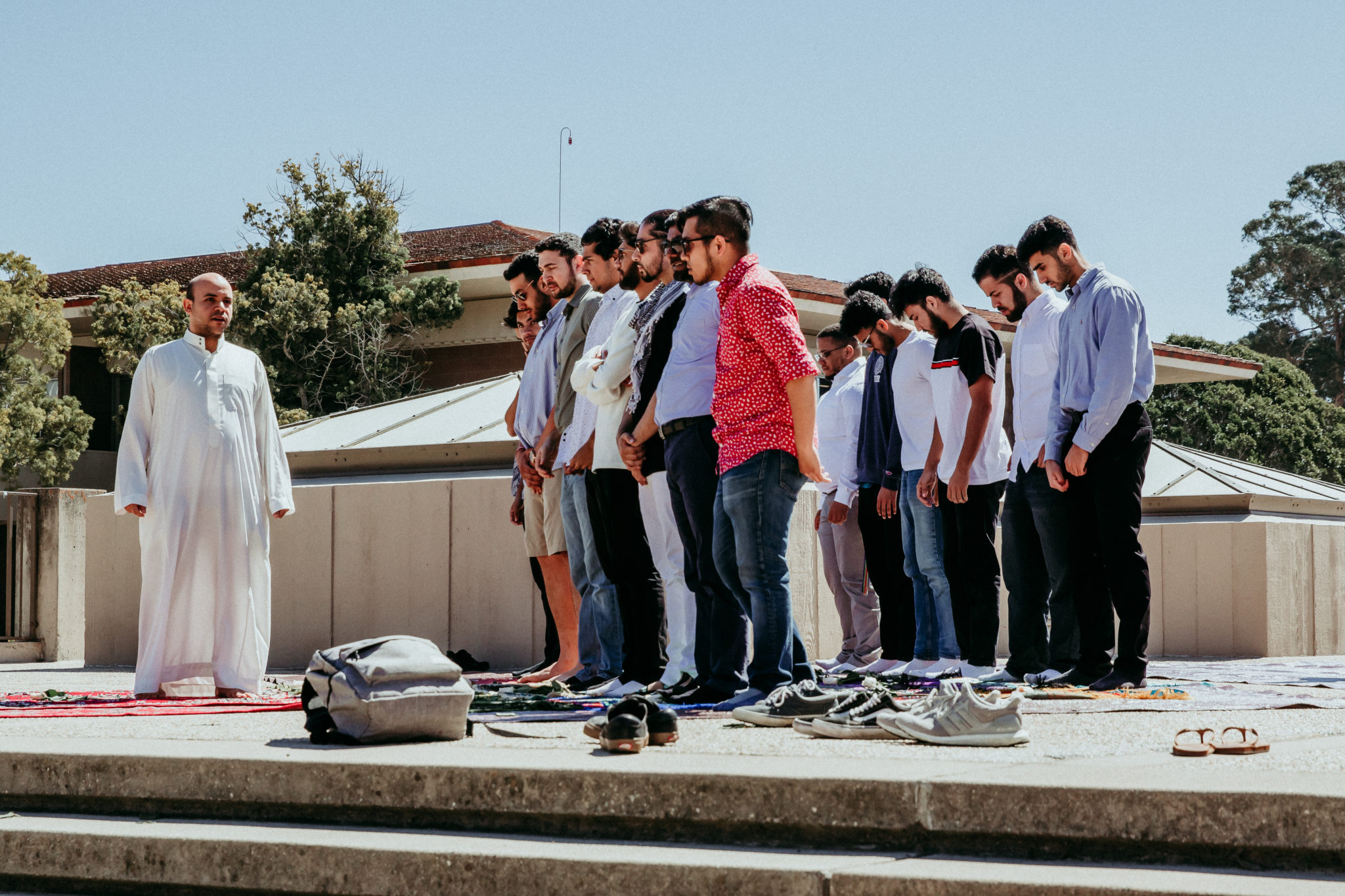 The vigil ended with a Janazah prayer and a silent march to the MultiCultural Center. Angie Banks / Daily Nexus

The vigil itself came together in a mere 72 hours.

When the MSA first learned about the attack, members were outraged, Faiz said.

“We had to really calm everyone down and be like, ‘Hey, guys, I know that all of your anger is justified, but being angry isn’t gonna solve anything. We need to do something that honors the victims, not focus on the shooter,’” she said.

Rabie was the one who first introduced the idea of the vigil, although Faiz was worried that the turnout would be low, given it was finals week.

Over the course of the weekend, the students met up to sketch out the agenda for the vigil and write their speeches.

Faiz said she initially didn’t realize how much she was grieving: “The weird thing about grieving is that you don’t realize you’re a little off until after you get better, ‘cause that’s when you realize, ‘Oh, this is how better feels.’ ”

“[On Thursday], it was kind of like feeling numb, like the grief hasn’t completely hit yet,” she said.

Later that night, as the stories began pouring out about the lives of the victims, and as she read up on them, “that’s what really brought out the grief.”

“Seeing how each person kind of has an emotional aspect or a loved one or a story, that’s what you start to relate with. That’s what really starts making you cry.”

The vigil today operated as sort of the “last part of our healing,” Faiz said.

“We were able to feel good and see all that positivity. That kind of washes away all the fear and sadness.”

As she put together the list of people who died in Christchurch, Faiz said it was then she realized just how many lives were lost.

“If we just said ‘51 people passed away,’ you don’t really understand the magnitude of it. But when you read each name out and realize how long the list is going, that’s … when you realize, ‘Wow, this is so many people and stories.’ ”

Faiz said the support the UCSB community has given her and the other students was “overwhelming.”

As they worked to organize the vigil, Faiz said the administration was more than willing to help the event come together.

Klawunn, in particular, reached out to Faiz even before MSA had contacted UCSB administration, saying that she was thinking of the MSA after hearing about the attack.

“The fact that it’s not just that I have to notify them, but they’re already aware of it and reaching out to me, that meant a lot to us,” Faiz said.