In 2016 I found myself sitting in my senior year english class, listening to a professor from UC Berkeley with a PhD in sexology teach us about safe sex and consent. Up until this point, the only definition of consent that I had ever heard was always “no means no.” Every conversation about consent seemed to end with this succinct summation.  But as a teenager navigating the complicated process of growing up, I learned that saying “no” is a lot easier said than done. A “no” does not always look or sound like someone simply saying “no.” Sometimes a “no” is silence. Sometimes a “no” is fear. Sometimes a “no” is a series of no’s that ended with a “fine.” I knew what consent was, but it was still hard to know whether or not I was truly giving it, because while I wasn’t saying no, I wasn’t exactly saying “yes” either. What I learned that day in class was that consent isn’t about saying “no,” it’s about saying “yes.” That day had a huge impact on how I view consent even now. And while I was so grateful to have had that education, I couldn’t help but wonder, what took so long? 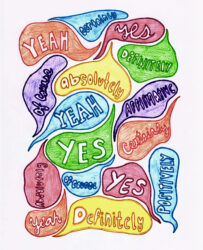 Up until recently, there hasn’t been much legislation surrounding consent. Federally, rape is illegal, and rape is defined as penetration without the consent of the victim. So while we have a definition of rape, we also need a definition of consent. This is where it gets dicey. Consent is defined differently in every U.S. state, but overall, each definition can be summed up as “no means no.” This changed in California in 2014 when Senate Bill No. 967 (codified as Section 67386 of the California Education Code) was signed into law. This law requires public schools to adopt policies and develop curriculum around affirmative consent in order to receive state funding. It’s affirmative: this law changed the definition of consent. Without affirmative consent there is pressure on the victim to resist, but sex should never involve resistance. The idea is that if someone wants to have sex, they will tell you, and before that happens, keep your hands to yourself. Consent is not the absence of a “no,” but the presence of a “yes.”

That brings us back to my senior year in a California public high school, and finally feeling like I just might understand what it means to actually say “yes.” But I don’t think we should wait until kids are having sex to talk to them about consent. Consent is a conversation that should start as soon as we can walk. Deciding who can touch your body and how does not always have to do with sex—it has do with choice and respect. Consent is not inherently sexual, and we have to stop treating it like it is. If consent was something we taught as early as pre-school, maybe kids would grow up into adults who understand what it means to ask for and to give consent. Luckily, some schools in the United States are doing just that. At Lone Tree Elementary in Iowa, they teach students consent in one of the simplest of ways: saying hello. Every morning the pre-schoolers greet each other and the kids may choose between a hug, a handshake, a high five, or a fistbump. This practice was originally put in place to encourage positive interactions between the students, but on a larger scale it teaches children to not only seek permission before touching someone, but also that it is okay to be explicit about what they want for themselves as well, even if it’s only the difference between a hug or a handshake.

While it might seem intuitive to establish consent between peers or strangers, I’d like to take it a step further and argue that it should be established between family members as well. It is often expected that young children hug or kiss grandparents, aunts, uncles, etc. Of course, I think this is wonderful, but it is not uncommon for young children to resist or be uncomfortable with forced contact. I was certainly a stubborn child once who didn’t want to kiss my relatives, but eventually, I learned it was something that you just have to do, even if you don’t always want to. But by forcing even these most innocent interactions, it teaches children that they should do what is asked of them and their bodies, even if it makes them uncomfortable. It’s an act of assumption and it teaches a code of putting other people’s desires before your own. Now, don’t get me wrong, I’m not saying that kids should never be encouraged to show physical affection to family members, but I am saying that even the small act of asking for consent (and respecting the answer) before hugging a child could have a long-term impact in teaching them what consent looks and feels like.

Consent is a conversation that should start as soon as we can walk. Deciding who can touch your body and how does not always have to do with sex—it has do with choice and respect.

Now more than ever consent is finally a topic of conversation. With movements like MeToo, there is a long overdue dialogue starting about what it means to truly say “yes.” I want to take it further and make it a conversation that isn’t just about sex, and isn’t just for teenagers and college students. Growing up, I found consent complicated, but it shouldn’t be. Perhaps if we grow up learning to respect one another and ourselves—by seeing and practicing affirmative consent in all facets of touch—then “yes means yes” could just be common sense and decency, rather than a complicated piece of legislation.

According to the U.S. Department of Health and Human Services, one in five women will experience sexual assault in college. Based on the women I know in college, that number is much higher. This number only represents those who report, but think about how many don’t. For their own reasons—whether it’s fear, embarrassment, or not even realizing they were assaulted in the first place—so many stay silent. I have left sexual interactions feeling ashamed or hurt, but I couldn’t understand why. I never said no, after all. Sometimes it takes time (and really good friends) to recognize sexual assault when it happens, and that’s why we need to talk about it.

Consent wasn’t really a conversation in my life until late into high school, and even then, it was always in classes, and certainly never anything that was talked about within my family. It’s time to start having these conversations, because no one should ever touch or be touched without consent, and only “yes” can mean “yes.”

This discussion about the affirmative or negative nature of consent is really emblematic of our culture’s newfound emphasis on casual sex. You really only need this stuff for casual encounters, unless you’re suggesting a couple of twenty years needs to go through this painfully dull routine every time they want to make the earth shake. The problem I have with your argument is that you’re so expanding the definition of a nonconsensual encounter (i.e. rape or sexual assault) to include basically every sexual encounter that has ever been had by anyone. Rape is a very serious crime, and it ought… Read more »