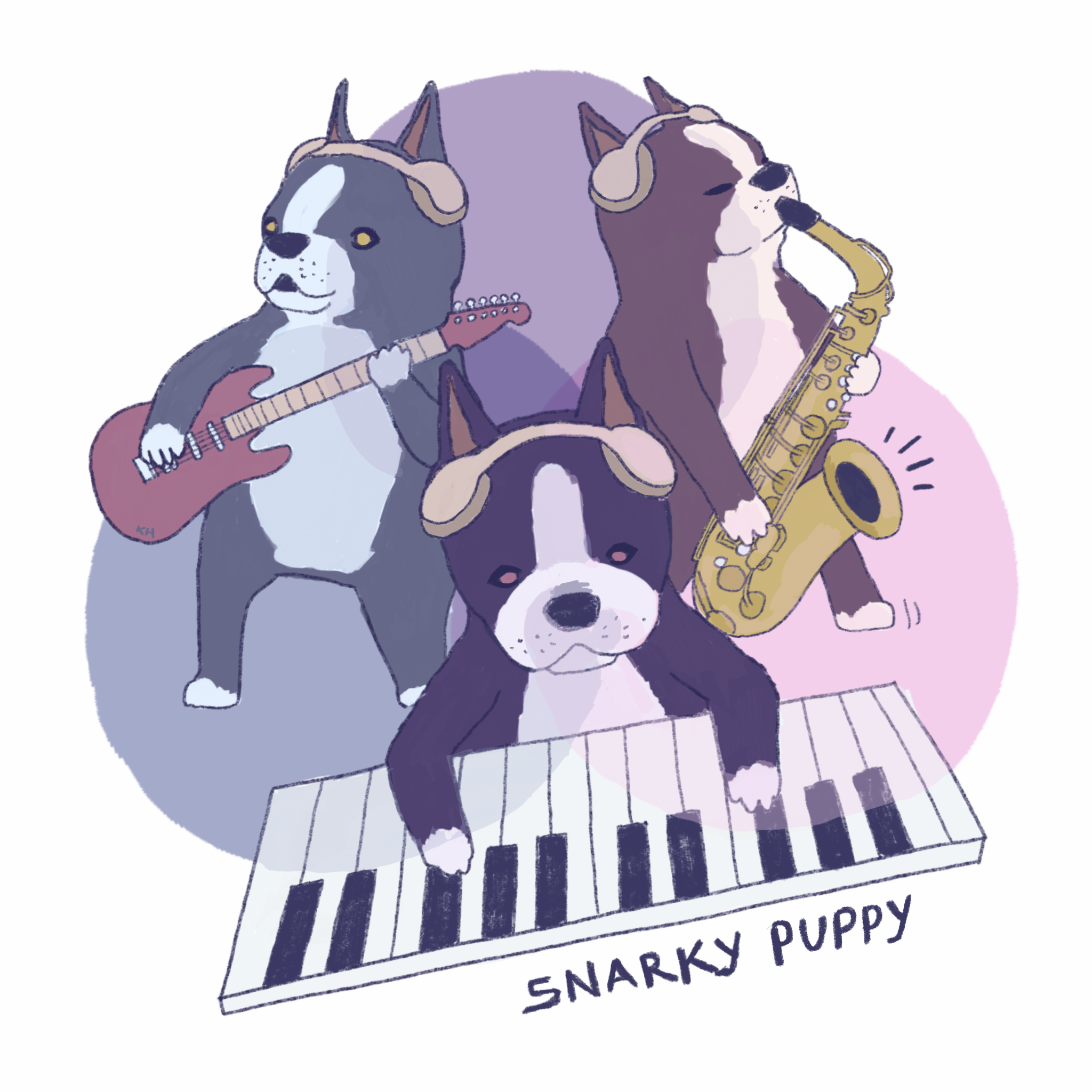 As winter comes to an end, the eclectic award-winning jazz-fusion group Snarky Puppy performed in Santa Barbara for the first time after 12,000+ performances in six continents since their formation in 2004. Before the show, band leader and bassist Michael League gave a master class to UCSB’s Jazz Combo and students from San Marcos High School.

When UCSB Arts & Lectures announced the concert, I was thrown back to a memory of when I saw them at the 2016 Reno Jazz Festival. Their set was loud and flashy, splashed with bright purple lights and smoke. At the time, my knowledge of Snarky Puppy was limited to the benevolent ramblings of my high school jazz teacher who would exclaim his love for the group. In 2019, I finally  experienced this excitement for seeing them live that my teacher had three years ago.

Inside the Granada Theater, the stage was illuminated with a gorgeous mix of purple, blue and magenta lighting. An array of curious instruments patiently sat on the stage; bongos, congas, an organ, a flute, two keyboards and more foreshadowed the craziness that would soon take place. Among the chitchat of anticipation, a mix of classic soul, funk and R&B floated faintly in the background. The crowd was a blend of young and old jazz enthusiasts, all with glistens of bubbling eagerness in their eyes as “I Got You” by James Brown accompanied their chatter. Once the lights dimmed, I immediately sensed the aura of enthusiasm for what was to come.

Snarky Puppy, comprised of 10 musicians, opened their set with a breathtaking percussion solo by Nate Werth. Slightly elevated above his band members under a single spotlight, Werth soloed as all eyes, including his bandmates’, focused on him. After a roar of applause, the group burst into their opening song, “Semente.” The wispy melody of flute juxtaposed the blaring horns and synths, creating a rock- and funk-filled atmosphere that captured the audience and welcomed them into the band’s eccentric world of music.

They next played “Bigly Strictness” and “Chonks,” two songs from their upcoming album. Full of heavy synth bass, distortion and reverb, “Chonks” was instantly a crowd favorite. On the keys, Shaun Martin soloed over the booming bass with high-pitched riffs straight from outer space. He occasionally spoke the lyrics, “Chonks,” on beat into the microphone which invoked giggles every time.

In the following song, “Thing of Gold,” the band took a more interactive approach. Martin secured lead as they neared the head of the song and questioned if the audience knew the iconic melody. The crowd responded quickly by shouting the nostalgic tune, their voices filling in the gap and becoming a part of the show. Martin ended the performance with an astonishing organ solo and entertained the audience by humorously incorporating “Amazing Grace” into his improvisation. One audience member yelled, “Preach!” as the rest erupted into laughter.

Transitioning to their next song, League prefaced with a disclaimer for the track: “It’s kind of hard,” he said. Before counting off the band, League said, under his breath, “Okay, ready? Nope, me neither.” The incredible tune “Xavi” then took off with no caution, like a roller coaster let loose of its tracks. The flute made a return, only to be startled by the demanding and assertive presence of electric guitar. As the song progressed, the atmosphere became like a beehive, an organized chaos. The horns were unstoppable bustling bees on a mission, contradicting the rhythm section, a steady and intuitively accented buzz. The tension from the crowd anticipating a resolution to the chaos shifted to a massive roar of cheerful applause as the band members finished the journey and high-fived each other in a sigh of relief.

Other highlights from the show included an astounding drum solo in their new song “Bad Kids To The Back” by Jason “JT” Thomas, who received a couple standing ovations. Watching Thomas skillfully play his instrument was like watching a blur: dozens of movements within seconds that could not be comprehended by an amateur but made perfect sense to its player.

Snarky Puppy ended their set with the popular “Shofukan,” and an encore of “What About Me?” It was heartwarming to see the audience of all ages unify through the uncontrollable urge to groove along with the music.

The easygoing presence of Snarky Puppy — in their casual jeans and t-shirts talking and laughing with each other on stage and with the audience — contrasted the jazz and fostered an unforgettably intimate and otherworldly show. They captured the beauty of jazz: a confident, spontaneous, instinctive and passionate form of art that combines the musicianships of the group and individual self-expression, all while making it their own and having fun. For the audience to respond to the finale on their feet — clapping, raving, yelling, waving, throwing up “rock on” signs with their fists — was a sign of gratitude to Snarky Puppy for transporting them into their purple, blue, and magenta world for two hours on a Sunday night.