The Daily Nexus
Self Study
Not Your Exotic Babe: Navigating I.V. As Ethnically Ambiguous
March 11, 2019 at 9:54 am by Anonymous Gaucho

Editor’s Note [12/24/20]: This article was made anonymous at the request of the author due to safety concerns.

In the classic NBC show “The Office,” the oftentimes politically incorrect but loveable Michael Scott (Steve Carell) says to new worker Karen Filippelli (Rashida Jones), “Wow! You’re very exotic looking. Was your dad a GI?” The scene proceeds with both Pam (Jenna Fischer) and Karen visibly expressing their discomfort and disgust with Michael’s comment. Multiracial men and women, like Karen from “The Office,” are subjected to these kinds of inappropriate remarks in situations spanning from professional to romantic, with the physical attributes of the multiracial person typically driving these kinds of unwarranted comments.

My junior year of high school was my first introduction to the strange world of dating while being ethnically ambiguous. I distinctly remember my friends telling me how some boys at our school referred to me as “the Indian Princess,” “Princess Jasmine” and “the exotic girl.” For context, these boys were white, lacrosse-playing, Vineyard Vine-wearing prep school students, while I was an introverted, part white, part South Asian, part East Asian 16-year-old girl. At the time, I was honestly pretty excited that boys were even talking about me, but I do recall telling my older sister about this situation, and her reaction was pure disgust. She told me how gross and vaguely offensive the nicknames were and used the word “fetish” as a descriptor as well. I thought she was overreacting over nothing, but I did wonder why their names for me had racial undertones. 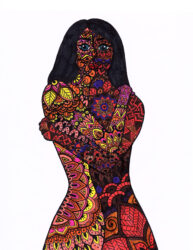 High school continued with several more odd boy-girl situations that had to do with my ethnic ambiguity, including more comments about my “exotic looks” than I can count, the awkward “Uh…so what are you?” question that every boy would inevitably ask me and even a Spanish teacher describing me to the class as “una chica exotica.” I believe that the teacher was simply trying to teach students how to describe people in Spanish beyond simple vocabulary words like “bonita” or “linda,” but it felt strange that he used those terms to characterize me in front of my classmates. In the moment, I definitely thought that the constant remarks and fascination with my confusing ethnic makeup was weird, but I wasn’t offended. Mildly creeped out, sure, but not insulted.

Coming to UC Santa Barbara in the fall of 2017, I honestly believed that these misinformed but not necessarily malicious interactions about my ethnic ambiguity would not occur as frequently. I went to a private prep school that wasn’t particularly known for its diversity, and I was under the impression that Isla Vista was a kind of paradise with friendly students who were all busy surfing, smoking weed or, in the rare instance, studying. I did not expect to be inundated with boys whose main fixation of the evening was my unusual ethnic background.

Whether it be from frat parties, going on actual dates or even catcallers on DP, the amount of prying questions from boys about my ethnicity have been so prevalent, it’s almost comical. My friend told me I should start a Google Doc and document the funniest and most occurring unwarranted observations, and that Google Doc now has quite a few pages filled.

“Your looks intrigue me. You just look … different”

“So what kind of girl are you? Besides exotic, of course.”

“Damn, well I do have a thing for [fill in the blank of a fetishized minority] girls.”

One of the most awkward situations I’ve faced at UCSB transpired because of my ethnically ambiguous looks. During my freshman year, my friends and I had been out at a party and had decided to leave a little before 12 a.m. As we were walking down the sidewalk, a cop ordered us to stop on the corner of the street. Wide-eyed and panicking, my friends and I complied, and I remember legitimately praying that we wouldn’t get in trouble. But instead of asking us law-enforcement questions about where we had been or what we had been doing that night, the cop ignored all my friends and narrowed in on me and said, “You’re so exotic. Where are your parents from? You have very striking, beautiful looks.”

Calling someone “exotic” is not a good pickup line. It reinforces the idea that non-Western cultures are far removed and unusual, and this idea can potentially cause identity confusion for mixed-race people because a part of their background may be from a Western culture as well.

I was caught off guard by his comments but also so relieved that I wasn’t getting in trouble for anything. There was an obvious power dynamic that favored the cop in this situation, so I played along with him and good-naturedly answered his questions until my friends and I were able to walk away comfortably. I felt a sense of confusion and discontent as I walked away, realizing that a person who is meant to keep the community safe and orderly felt a great enough need to stop me and point out my ethnic ambiguity in the strange form of a pickup line.

It was here at UCSB, and especially after the cop encounter, where I started to reflect more on what these interactions actually meant to me and what their implications were. They definitely still didn’t mortally wound me in any way, but they did lead me to wonder more about what drove these men to feel a need to vocalize that they essentially saw me as nothing more than a confusingly ethnic object with a year-round tan and light-colored eyes. I would be lying if I said that none of the comments ever made me feel insecure or uncomfortable, but I was aware that from the majority of these people, the comments stemmed from a place of social ignorance, not malice.

Calling someone “exotic” is not a good pickup line. It reinforces the idea that non-Western cultures are far removed and unusual, and this idea can potentially cause identity confusion for mixed-race people because a part of their background may be from a Western culture as well. In terms of dating and relationships, I am the first to say that there is absolutely nothing wrong with asking a person about their ethnicity out of genuine interest and curiosity. However, it is important to understand the right context in which it is appropriate to pose the question and to not preface the question in a way that implies that the mixed-race person is somehow different or abnormal. If I’m telling a man about my family in Asia, it’s reasonable to expect him to want to know more about my familial and ethnic background, considering that I do not look full Asian. But if a man’s way of initiating flirting or demonstrating interest consists of making a fetishizing assumption about my perceived race, I can say with certainty that I will not continue to engage.

In my own experience, I haven’t gained enough confidence to call someone out for reducing me to my own ethnic ambiguity. However, it is important to realize that people react to things differently, so my personal anecdotes and reactions obviously can’t speak for every mixed-race ethnically ambiguous person. But as the mixed-race population in the United States continues to increase, it is clear that there are multifaceted social issues, including racial fetishism, that members of this group often face. Bringing visibility to these topics won’t eradicate them, but it will hopefully at least provoke people to be a bit more thoughtful and cognizant when discussing multiracial people’s backgrounds and traits.

Anonymous Gaucho encourages people to consider the complexities of the dating world for ethnically ambiguous individuals.

Categorizing “exotic” as fetishizing is a bit of an exaggeration. At least in the past, a fetish was a bit more specific… like someone whose dwelling was covered with sketches, photos, and text about women’s second smallest toe on their left foot.

People (particularly in the 20’s, or, most law enforcement officers) are simply awkward in expressing their admiration for your beauty.

wait so who’s the cop?