The Daily Nexus
Opinion
Healthcare in College is a Total Headache
March 7, 2019 at 9:12 am by Hannah Jackson

The pain was blinding and seemingly came out of nowhere. The throbbing began in my right temple, which no amount of massaging or pressure could dull. Suddenly, the pain exploded into my eyeball like a piece of shrapnel. I was 8 years old and thought I was dying.

When you’ve been getting chronic migraines for the majority of your life, dealing with constant pain is just a part of daily existence. If someone had told me 12 years ago that today I would be experiencing the same pain on a regular basis, I could not have imagined operating on that threshold of discomfort. Usually, the migraines that I get on a weekly basis are categorized as pesky; they leave me able to function but with noticeable discomfort. However, more serious migraines have made it so that at times I am on the verge of vomiting, sensitive to the faintest light, sound or smell and even partly lose the ability to see. 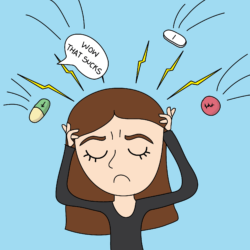 Elaborate new treatments for migraines are always popping up, with tantalizing FDA-approved labels and seductive promises of reduced and less severe headache days. Sometimes, the treatments seem ridiculous: Botox injections to the head, menthol-infused patches, weird-looking headbands that contain electrodes. But recently, when the FDA approved one out of just three injectable migraine drugs on the market, I immediately knew that I wanted to get my hands on it.

To absolutely nobody’s surprise, the American healthcare system is a dense jungle of red tape, and getting a prescription for the injectable medication turned out to be borderline impossible.

“You aren’t a good candidate for this drug,” my neurologist told me, as he handed me a prescription for an anti-seizure drug called Topamax instead.

“You haven’t tried enough medications for your insurance company to cover this one,” which essentially meant that if I wanted the injection, I would have to pay thousands of dollars out of pocket every month  — just to potentially feel okay.

Thus began yet another seemingly endless trial-and-error run with a foreign medication, and for the third year in a row, I resigned myself to physical pain and chemical cocktails, hoping that the side effects wouldn’t be all-consuming.

This fear of side effects didn’t emerge from nowhere; it had happened before and I was positive that it could happen again. During my freshman year of college, I switched brands of birth control from a standard 21-days-on/seven-days-off cycle to one that increased my hormone levels every week —  dually managing to make my painful periods even worse and slamming me with a blindsiding depression.

I spent the first two quarters of my second year in a tailspin. Crying fits would spring up out of nowhere and an increasingly volatile relationship with the person I had considered my best friend was making it all the worse. It took until spring break to admit to myself that what had once been rattled off as a potential side effect had grown into an autonomous beast, encompassing my entire existence.

My personal experience with Prozac has been ideal. On the first sunny day, a few weeks into spring quarter, I found myself imbued with a newfound appreciation for life and sat on the Arbor lawn for over an hour basking in my gratitude. While that initial burst of euphoria doesn’t last forever, Prozac has done wonders in anchoring me to the world — a trait that was very much appreciated when a death in the family during spring quarter hit and I realized that had I not been on antidepressants, my grief would have been exponentially more explosive.

To absolutely nobody’s surprise, the American healthcare system is a dense jungle of red tape, and getting a prescription for the injectable medication turned out to be borderline impossible.

Not every experience can be as simple and as painless as my trial with Prozac, which was ironically needed to curb a side effect gone rogue. The migraine medication I take now, Topamax, has catapulted both my body and my mind through a never-ending loop of misery: numbness of the extremities, indigestion so severe that I can barely stomach any food that isn’t unexciting and bland, severe dehydration, tiredness, sluggishness, nervousness, loss of appetite, weight loss. But worst of all, beyond any of the frustrating physical symptoms, is what it has done to my mind.

Being on an anti-seizure medication inhibits brain function and having this knowledge is infuriating when there isn’t a damn thing to do about it. I can feel my thoughts forming slowly, like a late 90s computer would load a webpage on Internet Explorer. I feel myself slipping academically, and I have to consciously choose whether or not to produce my optimal standard of work or open myself up to the possibility of earth-shattering migraines.

There is no support available for these kinds of problems in university because, quite frankly, there is nothing to be done. Healthcare is a personal choice to make and ultimately, I am the only person who can decide for myself if these horrible side effects are worth the head-splitting pain I’ve experienced on a weekly basis for the past twelve years of my life. And I still don’t know. That being said though, dealing with side effects that affect academic performance is an incredibly isolating experience — especially when the typical response from friends, counselors, TAs, doctors and professors alike is, “Wow, that sucks.”

Experiencing medical crises or medication-induced side effects that have impacted my academic career has been a lonely experience. Friends who do not experience similar health issues rarely sympathize, and I have regularly feared that sharing these problems with my TAs and professors will mark me as a complainer, an excuse-maker or someone who just isn’t trying hard enough.

Be there for the people in your life who are facing academic struggles due to health problems. Make an effort to get dinner with them, plan study dates, or even just ask them how they’re actually doing. Feeling like a stranger in your own body is jarring enough, and the added stress of falling behind in school can only make your sense of self more removed. While it’s certainly nobody else’s job or obligation to deal with that, having a good support system makes an insurmountable difference.

Hannah Jackson wants to hear something better than, “Wow, that sucks.”