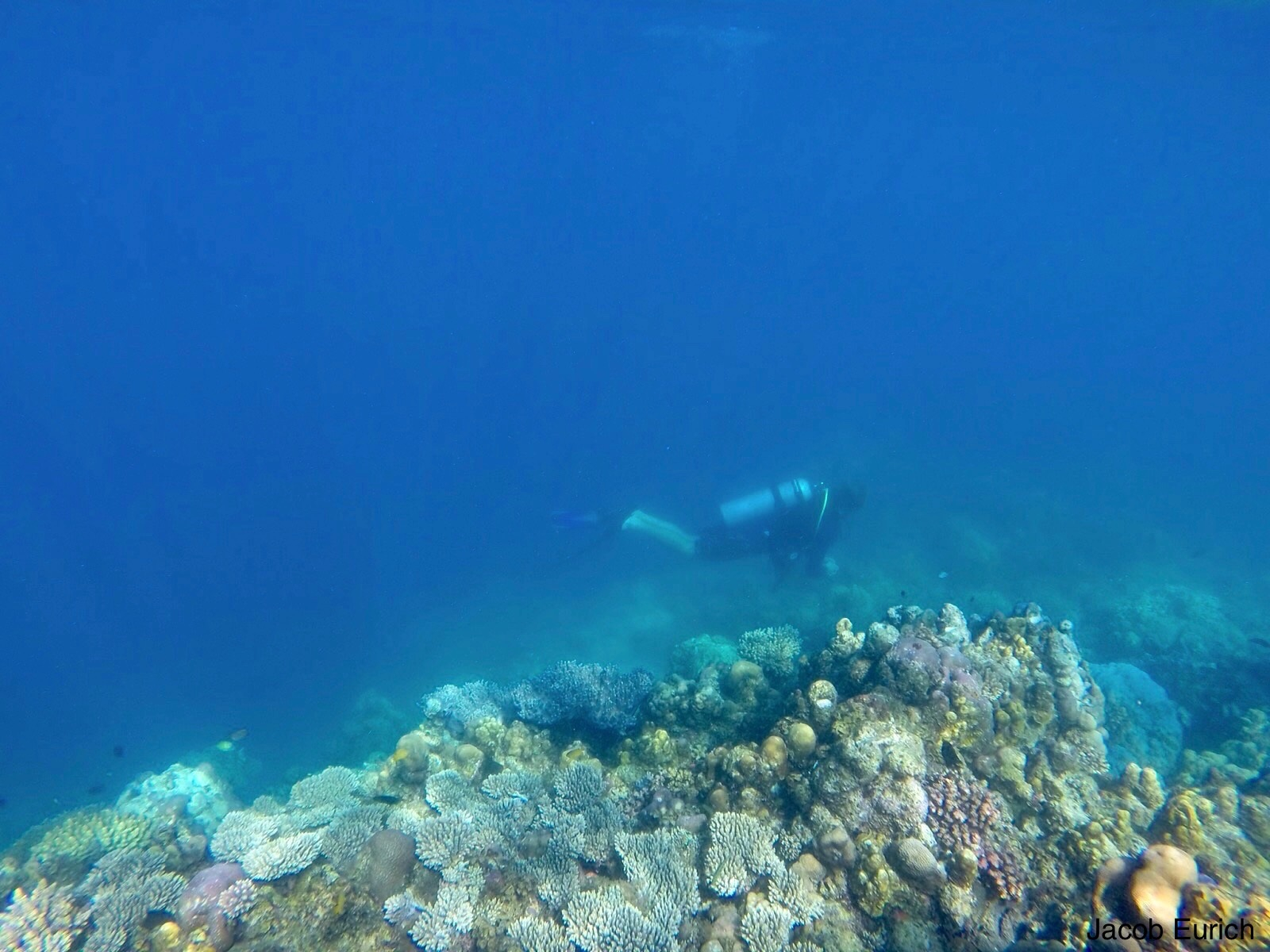 Within the Coral Triangle in the Indo-Pacific region exists the world’s greatest richness of marine species, including seven species of territorial damselfish. Also found here is the smallest scale of spatial partitioning recorded for these species, with just one or two meters separating some populations. How, scientists wondered, do these territorial fish coinhabit the same coral reefs without directly competing?

At Kimbe Bay, Paupa New Guinea, in the Coral Triangle, researchers used stable isotope analysis to study the damselfish diet. What an animal eats gets incorporated into its tissues. By tracking specific molecules found in potential food sources and detecting them in tissues, the scientists were able to infer the diet of these fish.

“Rather than getting a ‘snapshot’ of [the damselfishes’] diet by looking at its stomach content, you get a long-term picture of what the animal consumes on a regular basis because the food is incorporated into the animals’ tissue,” Jacob Eurich, a UC Santa Barbara postdoctoral researcher and the lead author of the paper, said in an email.

Species must consider various significant factors including food sources and level of competition when it comes to their survival. Limited resources such as habitat or food prompt animals to adapt and carve out niches.

Trophic partitioning, the sharing of food resources to minimize competition, occurs commonly among most species. The researchers found that fierce competition from neighboring damselfish species forced populations to adopt this adaptation.

“An animal can’t spend all of its time and energy fighting a neighbor,” Eurich explained. “Instead, animals can reduce competition by using a different resource. In this study we showed some of the species switched diets to reduce competition.”

The results of this study, “Stable isotope analysis reveals trophic diversity and partitioning in territorial damselfishes on a low‑latitude coral reef,” published in Marine Biology, changed the researchers’ knowledge of these fish. 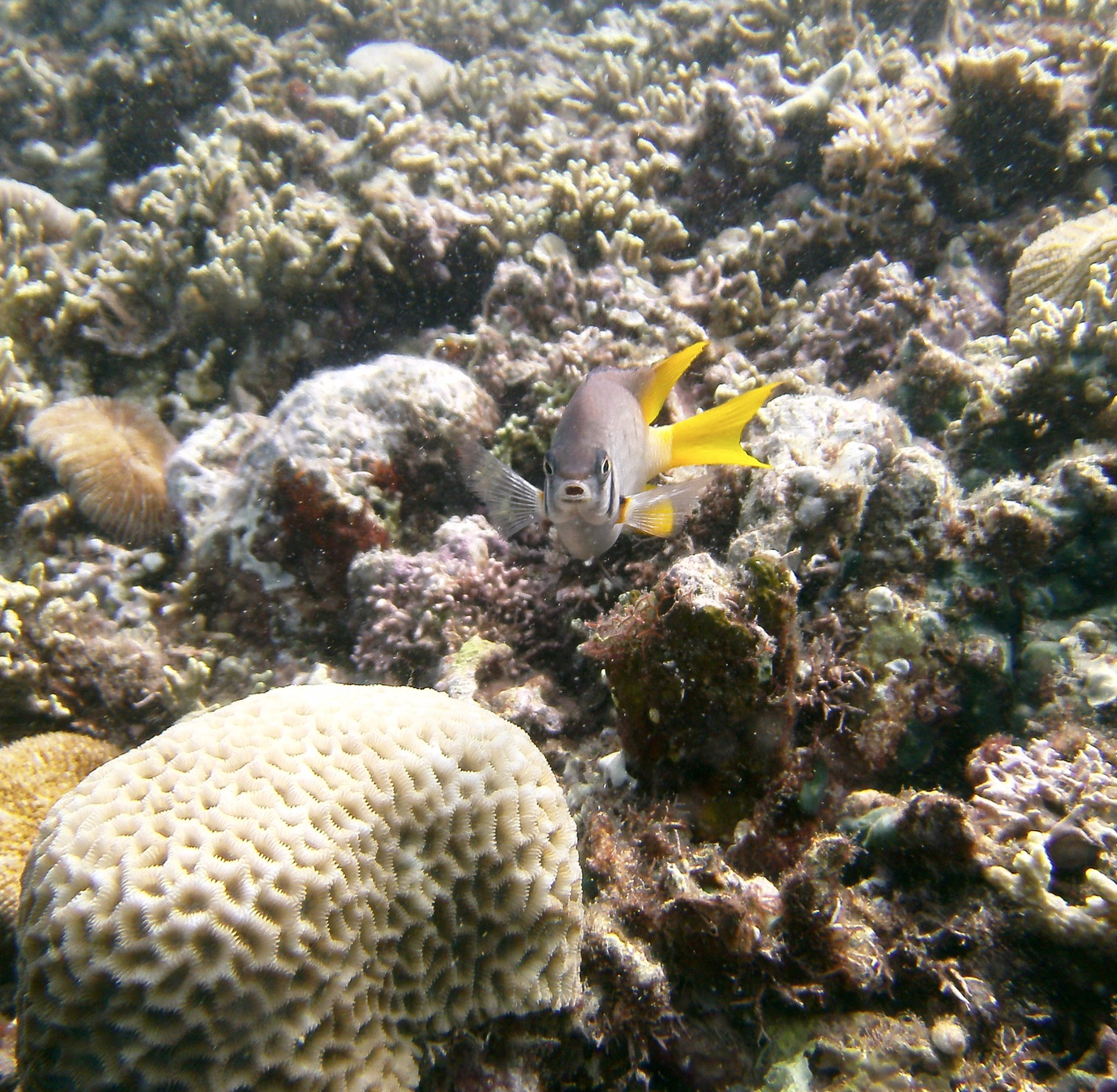 A damselfish by a coral reef in the Coral Triangle. / Courtesy of Jacob Eurich

As algae-farmers, these damselfish species were thought to have reef-based diets until Eurich and colleagues found evidence of two species foraging in nearby drifting water columns. This indicated pelagic, or open-sea, feeders. Using stable isotope analysis, they discovered that those damselfish species fed on microscopic zooplankton. They also observed an intermediate omnivore group, feeding on both algae and zooplankton.

This opportunistic feeding — when the fish’s preferred food sources may not be available for various reasons including competition — establishes one instance of how damselfish can readily acclimate to changing conditions.

Such adaptations may help explain why damselfishes flourish and proliferate while climate change and coral habitat loss cause the die-off of most species. In fact, their high success in survival has earned them the title of ‘winners of coral bleaching.’

“Baby fish, or larvae, float around in open ocean until they are big enough to settle onto a coral reef. In most cases the habitat they settle on is the habitat that is successful (individuals that settle on bad habitats likely will not make it) and where they will spend most of their life. These species then partition habitat at an even more fine resolution and complement this with trophic partitioning – or using different food sources,” Eurich said.

Eurich and his colleagues hope to continue exploring territorial damselfish ecology in areas such as the Caribbean and Great Barrier Reef, to see whether behavior changes by region.

“The study here shows how many of these species may coexist in the future. I think it is important to look at the competition and coexistence of species that may be the most abundant on future reefs.”

Based on these new observations of diet and habitat factoring, the study recommends recategorization of damselfishes.

“It is common to generalize what animals are doing, especially when considering how they influence our environment,” Eurich noted. “However, now, more than ever, we need to remember that species that look the same may not be doing the same things.”