On Friday, a group of student workers gathered at Storke Tower to protest the UC system’s new payroll system for its employees, which has disrupted pay for about two percent of all student workers since the system’s implementation in fall. 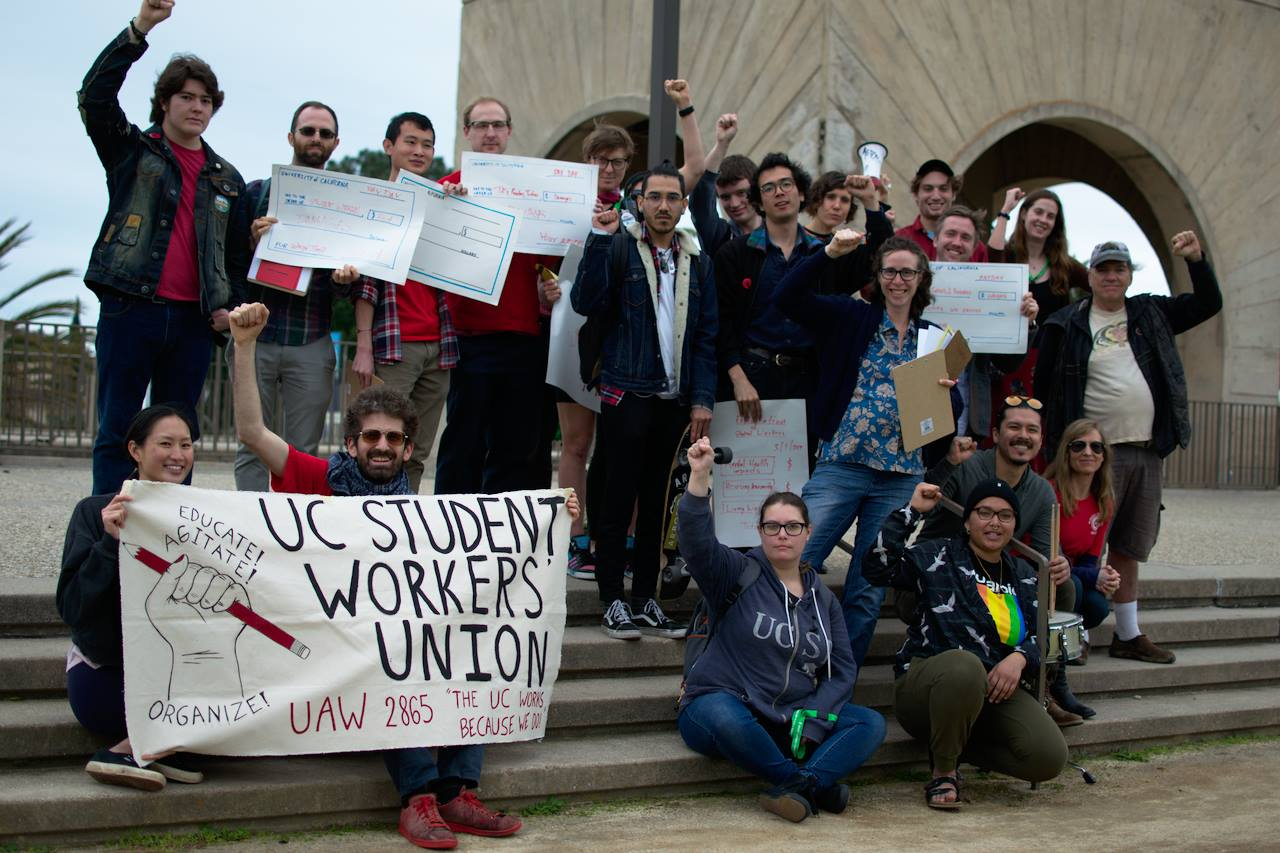 Union of Academic Student Employees (UAW 2865), UC Santa Barbara’s chapter of the union for teaching assistants, tutors, readers and more, put on the rally with the goal of pressuring the university into agreeing to a list of demands the workers compiled in light of UCPath’s failures, according to graduate student Cristina Awadalla, a member of UAW 2865.

The demands include “issue back pay, resolve all outstanding pay issues, including overpayments and correcting W2s, and reparations for affected student-workers.”

UC and UAW came to an agreement on Feb. 25, offering additional payment for affected workers. Each student employee affected by UCPath will receive $150 after taxes, and employees with paycheck issues that spanned more than one month will receive additional compensation up to a maximum of $450.

This agreement did not address backpay, overpayments or other issues.

Throughout the protest, several speakers took the floor to discuss their frustrations with UCPath as well as with the path to achieving restitution.

Some speakers mentioned personal anecdotes about how they had been affected with UCPath; one student worker, Department of Chicano Studies PhD student Mariano Nava Botello, had his car repossessed because he was not getting paid on time, according to a petition posted to the UAW Facebook page.

Sheila Kulkarni, one of the speakers and a first-year chemistry graduate student at UCSB, expressed frustrations about how the university is dealing with UCPath issues.

“I shouldn’t have to be in the Chancellor’s office to solve payroll issues or yell about my problems at Storke Tower,” Kulkarni said. “I never should have had to experience this nonsense in the first place.”

After the speakers, the group of students and workers began their march, walking from Storke tower, through the Arbor walkway to finish at Cheadle Hall. Over the course of the march, the group maintained constant chants that advocated for workers’ rights on campus, such as, “One day longer, one day stronger.”

As the protestors collected around Cheadle Hall, they again formed a group and reiterated the reasons behind the march through a microphone before walking into the administration building, where they searched for someone within the budget department to help the student workers with more serious financial problems caused by UCPath.

After the issues with UCPath began in August 2018, UAW 2865 and the Graduate Student Association joined teams to address the university with their grievances.

That partnership began pushing out surveys in October for students affected by UCPath in order to gather information on the extent of the payment problems.

Providing proof of the issues of UCPath has been no small task, according to UAW sergeant-in-arms and graduate student, Lisa August-Schmidt.

“We’ve been asked as a union to prove that people haven’t been paid, so we have to file every single case individually and provide every single name,” August-Schmidt said.

UCPath will be implemented at two other UC campuses — UC Berkeley and UC Davis — during the month of March. During these implementations, the system will experience outages beginning March 1 at 5 p.m. through March 7 and then again from March 14 to March 20.

Power to the People!