What would you start doing differently if you received $852 a month? Maybe you’d do more traveling. Attend more social events. Take art classes. Invest it. Or, maybe nothing would change at all.

$852 is the estimated average cost of living for a university student per month. The idea of removing the need to pay for basic necessities is a seductive and incendiary idea that the U.S. and Europe have been flirting with for some time — the idea of a Universal Basic Income.

Our generation is economically unique in that we are born into a situation where the condition of high amounts of student debt and unsustainable income are a very real and even normalized consideration. Unlike millennials, we were born late enough where the 2008 economic crisis is fuzzy and the Dot-com boom doesn’t carry a lot of significance. But, as we graduate and take on jobs, we are jointly inheriting the economic anxiety of millennials. People between 25 and 30 years today are 35 percent less likely to own a home than Baby Boomers when they were at the same age. Young adults today are more likely to rent, less likely to spend and less likely to invest — and this is not always for the better. Sometimes money could be put to better use generating returns in a portfolio, or in a fixed asset like a house, and spending is necessary to maintain a robust economy in future years. 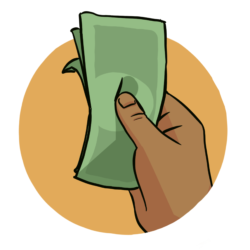 A way this herd anxiety is manifesting here on campus is that students today are more likely to major in S.T.E.M. or job-oriented majors. Comparing the UCSB campus profile for 2017-18 to that of 1998-99 (before the dot-com implosion), the percentage of students studying humanities and social sciences dropped by 5 percent, while the percentage of students studying S.T.E.M. went up by 21 percent. The humanities field as a whole has seen drops in subjects like English and History of 16 percent in just the three years between 2012 and 2015.

Imagine waking up for your 8 a.m. linear algebra lecture. It’s a stressful class and you know you need to maintain a GPA to be competitive to employers right out of college, so you can get a job and pay off student debt. Then, you remember that by graduation, you’d have been an adult for four years and will have received $10,000 every one of those years. If you’re an in-state student, you would enter into the world with no student debt at all and $10,000 in your pocket, besides living expenses, of course.

How does that make you feel now? Maybe you’d take an art history course next quarter even though it doesn’t satisfy any of your outstanding GEs. Or even decide that you want to look at fine art as a potential career path, although other adults tell you that the only way to survive in this economy is to become an engineer, doctor or lawyer. Instead of taking that CS class because that seems to be what all employers want now, you’d learn how to surf and read more mystery novels. Instead of jumping into the most lucrative job out of college, perhaps you’d sell art and work as a barista to cover additional expenses. You could even afford an apartment with this income combined with UBI.

Let’s say you work hard and you’re passionate, and it pays off. You get noticed by museum curators and auctioneers, patrons want to collect your pieces. You’re making bank. Now, this $10,000 isn’t so much a necessity as a nice bonus. Lease a Maserati! Go on vacation with your family. Get something nice for your spouse. Remodel your home! It’s all up to you, because UBI doesn’t go away the more money you make like Social Security benefits and you don’t feel unfairly robbed for working hard.

But, the government can’t just give away money to everyone! That’s not American.

It is part of the American Ethos to see the government and capitalism as working against each other: one works hard for their money, and one sucks a part of it away. However, in places like Sweden or Switzerland, people tend to view the government as a security net — something to fall back on. The tax rates in these countries are also significantly higher than that of the U.S., perhaps because citizens see taxation as a worthwhile payoff in their successful social programs.

This lack of trust in the U.S. government means that something as radical as UBI would not have as seamless a reception as in Europe. However, this policy would remedy the exact problem that caused Americans to lose trust in their government in the first place — inefficient allocation of their tax dollars. With UBI, all the extra spending by you and your friends is better and more efficient for the economy than the allocation of tax revenue into structurally-flawed social programs. Maybe it’s time to open our eyes to a new type of relationship we can have with our government. A change in attitude preludes a change in situation.

It is part of the American Ethos to see the government and capitalism as working against each other: one works hard for their money, and one sucks a part of it away.

It may seem like an outlandish idea that will never happen. But, the truth is that a delineation is forming between traditional, pragmatic policies and progressive ones. Senator Elizabeth Warren has proposed a system of universal childcare funded by an “ultra-millionaire’s tax.” Alexandria Ocasio-Cortez — Representative of New York’s 14th Congressional District — has released an outline of her infamous Green New Deal, containing bold economic policies and made it a goal to become carbon neutral in 10 years. Just recently 2020 Democratic candidate Andrew Yang proposed a universal basic income of $1,000 a month. “Who wouldn’t love free money?” he said to an audience of voters in Cleveland.

That’s a good question. There are clearly potential drawbacks regarding productivity incentives and feasibility, but maybe a universal basic income is something we should start discussing more as we look into our futures.