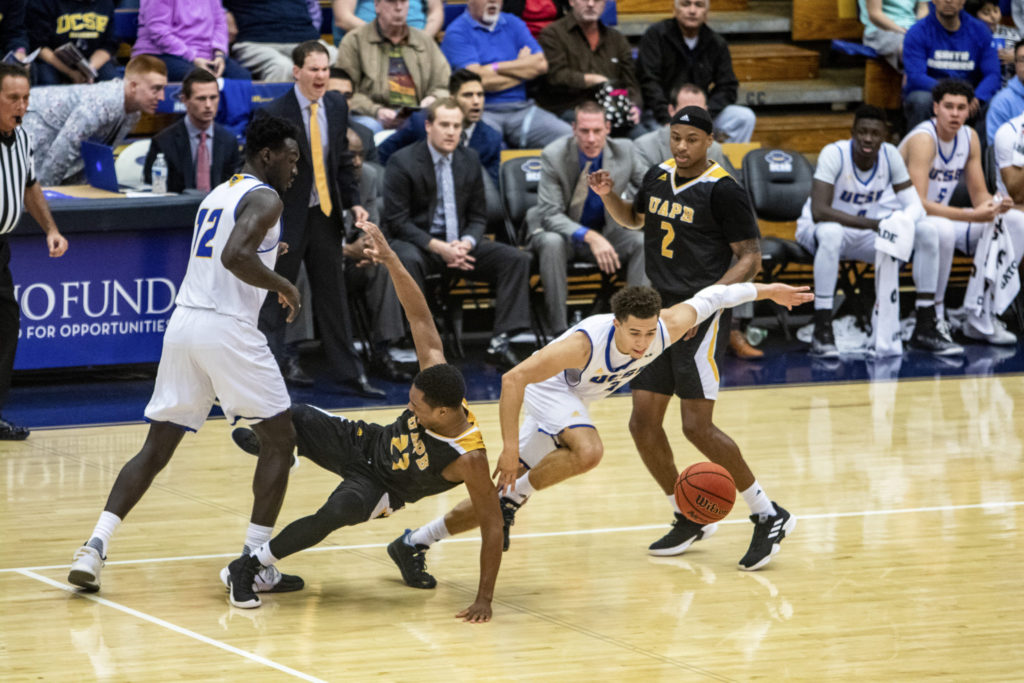 During the UCSB men’s basketball team’s senior night, a night that Gaucho seniors will likely never forget, it was the Long Beach State seniors that got the last laugh with a 69-64 win in the Thunderdome.

Santa Barbara honored two unorthodox starters in seniors Ami Lakoju and Maxwell Kupchak but were seemingly off-rhythm and out of sync from the get-go.

Long Beach senior Deishaun Booker, in the midst of a career year, was superb to spoil Gaucho Senior Night with 26 points while shooting 9-14 on field goals and 6-6 from the stripe to lead LBSU to its third straight win.

“They have the best guard in our league and I think you saw that tonight,” Head Coach Joe Pasternack said. “We’re going to only go as far as our rebounding and defense takes us… we didn’t do that for 40 minutes tonight.”

Booker surpassed the previous single season free throw record of 211 set by Fullerton Leon Wood in 1984 last week when he hit 10 from line to bring his season total to 216. Currently with 222 free throws this season, the record is rebranded by Booker and still growing.

The 49ers got off to a 7-1 lead early on and remained ahead for the majority of the first half.

While the Gauchos kept it close with a couple swings and a pair of lead changes about ten minutes in, Beach caught fire behind a triad of triples from senior Bryan Alberts who contributed to a 9-0 run with 3:30 left in the first capped off by an Alberts’ assist and a slam by senior forward Mason Riggins to put State in the lead 30-19.

Graduate guard Ar’mond Davis and the Gauchos inched closer at half time as Davis added six of his eight in the first half on 2-4 from three to bring SB within nine and cut the score to 34-25 at the break.

Sophomore captain Devearl Ramsey opened up the second on an 8-0 tear by himself to close out the lead even more to 34-33 as the Gauchos looked poised to make a hearty comeback with the home crowd back into it.

From there, Long Beach went blow-for-blow with UCSB, and although freshman forward Amadou Sow was getting everything he could in the paint, his points weren’t coming easily.

Sow started shooting 5-5 from the field but ended with 13 points and a 6-11 slate on field goals. The Mali native dragged down a career-high 15 rebounds and dominated the post, but Beach produced through its guards, and Sow wasn’t positioned or assigned to stop them.

Although momentum was fully in the favor of Long Beach State, the Gauchos took the lead 55-54 on a pair of Max Heidegger free throws with 6:15 left in the second, but Beach quickly scavenged back and took over once again.

The Niner lead ballooned to seven with two minutes on the clock, but a five-point swing with a flush from senior Jarriesse Blackmon and a trey from Heidegger pulled the Gauchos within 62-60 with 1:15 left.

At the line with 36 seconds on the game clock, sophomore Jordan Roberts missed a free throw that would have iced the game, but Beach corralled the miss and handed it back off to Roberts.

Booker, arguably the best free throw shooter in Big West Conference history, was not the right guy to hack down the stretch as he put it away for Long Beach State.

The UCSB men’s basketball team takes to the road for its final two games of the regular season as it heads to Northridge next Thursday, March 7, before traveling up to Cal Poly on March 9 for the next chapter of the Blue-Green Rivalry.