Huggins visited UCSB to talk about her time as a leader in the Black Panther Party and her experience being incarcerated as a political prisoner. Her lecture focused on identity, activism and change along with the spiritual component that ties them together. 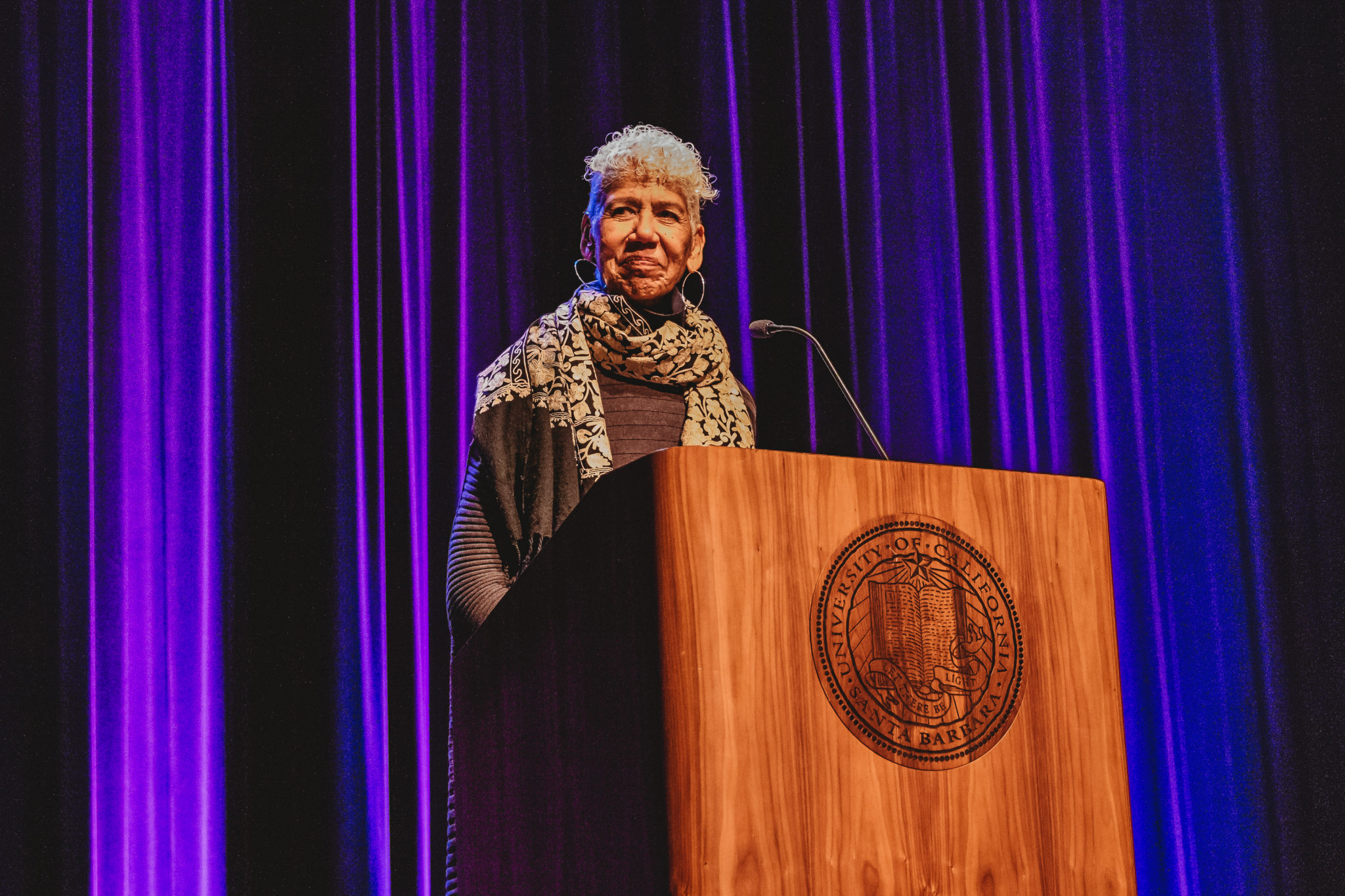 Huggins spoke about her time as a leader of the Black Panther Party. Angie Banks / Daily Nexus

Huggins led the Los Angeles and New Haven chapters of the Black Panther Party for 14 years after she originally joined in 1968, according to her website.

The Black Panther Party was a revolutionary Marxist-Leninist party seeking the liberation of all oppressed peoples by toppling capitalism, according to their former Minister of Information, Eldridge Cleaver.

The Black Panther Party was known for its radical approach to organizing and meeting the material needs of Black and other oppressed groups with free breakfast and groceries programs, free clinics, political education and armed protection from police abuse according to former chairwoman of the Party Elaine Brown.

“Ericka Huggins taught herself to meditate as a means to survive incarceration … since then she incorporated spiritual practice into her community work and as a speaker and facilitator, teaching it as a tool for change,” Gessesse said.

Huggins started off her lecture on the topic of having an “attitude of gratitude,” which over the years helped ease the pain of incarceration and being subjected to solitary confinement.

“When you feel like a speck of pepper in a sea of rice, remember gratitude,” Huggins said.

This also served as her first of many motions for audience participation, asking those in attendance to reflect briefly on someone or something they are grateful for.

Huggins prefaced her later remarks on identity, activism and change by describing what it means to be aware of humanity.

“Most all the isms — sexism, racism [and] classism — all of them are really not based in hatred. They look like they’re hateful, but they’re based in fear. Which is an irrational emotion for any of us to have.”

Huggins further posited that said “isms” aren’t to be attributed to individuals but to the institutions that manufacture and reproduce them.

“It’s structural … Remember that no one man or woman or group of men and women is responsible. It was here before they got here and before the ones before them,” she said.

Huggins then segued into identity from these statements, pointing out the significance of coinciding identities existing in one body.

“Even if we say my identity is human, which it is for all of us, there are other identities folded in … all in this one body,” Huggins said.

Huggins transitioned into discussing activism, first by explaining what it meant to embody the essence of activism.

“Activism is what you do, how you participate in creating the transformation you want to see in this world. In other words it’s the dues you pay for taking up space on the planet.”

“It is not a monolithic thing … [but] it needs to be a little bit beyond Facebook, okay,” said Huggins, joking with the audience.

Huggins, in between her humor, didn’t leave out the somber reality that can accompany activism, particularly of people like herself.

“Maybe you think that an activist has to live the kind of life that I lived. You don’t want my life. I assure you. It’s not romantic. It’s not pretty.”

Huggins spoke about change and transformation, noting her time in Upstate New York, learning from children who were researching the life cycle of a butterfly.

“They don’t just change. They transform,” Huggins said a boy exclaimed to her at the time.

Huggins connected this anecdote to her and the Black Panther Party’s struggle for a transformation of society beyond the previous change achieved in the 1960s.

Huggins laced the concepts of identity, activism and change together by advising the audience to step outside of the boxes built up around them and rejecting those imposed upon others.

“Whatever you were told about yourself and about others, if it doesn’t hold them up as fully human, you can let go of it … The universe won’t dissolve into the cosmos if we let go of some old, tired, whatever it is, but it’s important that we begin because freedom, is an inside job.”

A few students after the lecture offered their thoughts on which passages resonated most with them, and discussed the connection to the current political climate.

“I wish the talk was longer because every time I thought I knew something, her views on life told me different,” Aryn Jackson, a third-year communication major said.

Jackson related to Huggins’ belief that no one identity can fully explain the qualities of a person.

Nashelle Brown, a third-year film and media studies major, related the lecture to political polarization in the U.S. She pointed out that immense tension can impede change as well as the transformation that Huggins defined.

“None of these privileges are anyone’s fault; it’s how we use it.”

As an american jew, I LOVED this lecture. I agree that we need to embrace marxism and make sure to eradicate any kind of white or european identity, people who think that way are bigoted, racist and only want to cause harm to us.

Go back to your cave you nazi troll piece of shit

I get it. If you disagree with a violent African American hate group you must be a nazi.

Sad to see this hate group is still around.

Anti-Anglo and anti-Semitism is really happening on my campus. I’m ashamed to call myself an alum of a school filled with angry, hateful, intolerant, narcissistic, coddled white guilt students that want everything free. The Black Panther party is a genocidal hate group that attempted to wipe out the white race from humanity. Assata Shakur will probably be there next week. Now Black Lies Matter is the same movement in a different era.