The Daily Nexus
Opinion
How My Parents’ Divorce Affects My Love Life
February 26, 2019 at 12:00 pm by Sophia Rollins

If I’ve learned anything from my first plunge into the college experience, it would be the fact that with rigorous academia comes the complication of one’s personal life. A blink of an eye and a college acceptance later, the simple times of high school begin to seem so distant that they almost resemble a distant childhood memory. Between midterms, balancing surfing schedules, and constantly wondering how to impress Chancellor Yang, it seems impossible to find enough time to sleep. Now imagine throwing a relationship — let alone commitment — into the mix. On the one hand, it can be rewarding and freeing to launch into your first adult relationship. But dating in college can also be, for lack of a better phrase, fucked up. 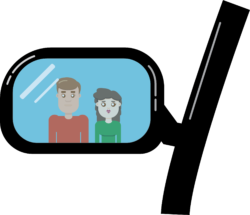 I was romantically involved in the typical teenage relationship a few times in high school. As each met their demise, I began to uncover exactly what factors into a relationship. Is it culture? Could it be morality or overall attitude? For many, it seems that there is a large correlation between romance and background. When it comes to my own, the defining factor is the fact that I grew up amidst my parents’ ugly divorce.

My first view of dating and relationships was somewhat cynical. At age eight, I was convinced that true love was a hoax and that devotion to another person was a waste of time. It took years to begin to trust flirtatious men, and the only way I could do so was by distancing myself from what my parents had been telling, and inadvertently showing, me for years. It was a big adjustment for me to ask my first boyfriend to drop me off at “Mom’s place” or “Dad’s.” In my home state of Washington, only 3.6 out of every 1,000 families divorced in 2014, and that statistic often haunted me when it came to making friends or important first impressions. There were times when I considered hiding my family’s situation, claiming my dad was always working or my mom was just around the corner having wine with a neighbor. The gist is that my parents ignore each other’s existence, and it used to be humiliating. When I first entered the dating scene, I participated in all the girly gossip of high school sophomores. Unlike many of my peers, I had no “meet the parents” family dinners, where my partner would nervously tug at his tie or call my parents “sir” and “ma’am.” I still often question exactly what childhood experiences or family stature best prepare someone for a healthy, prosperous relationship.

Throughout my first quarter and a half of college, this question has been increasingly heightened. Dating in college is already a mess. It’s just one more bowling pin to juggle, and I turn to my parents quite often as I slide my way into adulthood. I used to find it impossible to know when to consider their relationship guidance, my fear of ending up a divorcee getting in the way. Sometimes asking for advice even felt like I was squeezing lime juice into the wound of my parents’ failed marriage. I was scared of commitment because I never had a model that demonstrated how it was done or no one ever showed me how it was achieved. However, due to this dilemma, I have taught myself the most important key to dating. Because I have the opportunity to not use my parents as a cookie cutter example of a flawlessly operating relationship, I can carefully select what to value or leave behind when they offer me suggestions. I now choose what lessons they teach me about dating to internalize and to take to heart, and in turn, I am beginning to learn who I am as a girlfriend by my own standards. This was my “eureka” moment in that what once gave me grief and embarrassment now gives me an exceptional amount of freedom.

Sometimes asking for advice even felt like I was squeezing lime juice into the wound of my parents’ failed marriage. I was scared of commitment because I never had a model that demonstrated how it was done or no one ever showed me how it was achieved.

I am currently in a long-term relationship, and it is constantly being strengthened through this process. It is crucial to keep in mind that, no matter your demographics, college relationships can be tricky to balance. Remembering your roots at certain times will weigh you down but there are also moments when you can redefine them. Taking a look at the mistakes made by those who raised you can make a huge difference in how you choose to formulate your identity, as my parents’ errors have helped shape who I will be in the future. It’s okay to leave a part of where you come from in the rearview mirror when looking to understand who you, as an individual, are beginning to be.

Sophia Rollins would like to emphasize that you may have to become less like your parents to become more you.

Sophia Rollins
Sophia Rollins is an Opinion staff writer from rainy Seattle, Washington. When not complaining about the general chemistry series, she enjoys retail therapy and a good book.