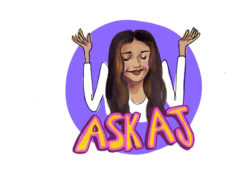 My roommate’s boyfriend keeps showering at our place and leaving his UNDERWEAR on my side of the room, but my roommate and I aren’t close friends and I don’t know how to bring it up without making things awkward.

Oh no… This is one of those times I am going to have to give your roommate and their S.O. the benefit of the doubt and say that they probably have no idea that you’ve noticed the underwear on your side of the room, or it probably hasn’t crossed their minds that the underwear is bothering you. Assuming your roommate isn’t a raging asshole who has purposefully placed the undies there with the intention of making you uncomfortable, I would suggest you take a more light-hearted approach to addressing the issue. That being said, being light-hearted does not mean you have to be any less straightforward. The next time it happens, I would talk with your roommate (probably not in front of their boyfriend), and tell them you’re not upset, but that you’d prefer if their boyfriend’s underwear wasn’t left on the floor.

I broke my bong after dropping it at a dayger. What’s the most health-conscious and environmentally-friendly way to get high without one?

Sorry to hear about your bong. I gotta say, bringing a bong to a dayger is a risky move, but more power to you, fellow Isla Vistan.

Given my inexperience with weed, I took to reading some health-conscious, eco-friendly stoner blogs and have come across a few suggestions. Aside from using a bong, it sounds like edibles are the way to go in terms of health if you’re concerned about possible respiratory side effects. However, if you’re watching your weight, eating a bunch of pot brownies probably isn’t ideal. In that case, I would say vaporizing your cannabis is better.

Some initial literature on vaporization suggests that vaporizing, unlike smoking, heats up the plant to a temperature where it doesn’t combust. In other words, vaporizing reduces exposure to the gaseous toxins associated with combustion of cannabis.

As far as eco-friendly smoking goes on an individual basis, there were limited comments and conclusions about the actual method of smoking, but more about the ways in which you could reduce your “cannabis carbon footprint.” Recycling your weed bottles and vaporizer batteries, using non-toxic glass cleaner and actually throwing away your roaches are a few simple ways you can be more environmentally conscious.

Just food for thought: While recycling and non-toxic glass cleaner are great, it may also be a good idea to consider the impact of corporate weed industry on the environment, but that’s for another article.

How do you properly ask a guy out since it’s kind of awkward because guys are supposed to ask girls?

Chivalry is dead and you are a strong, independent woman capable of asking this lucky mans on a date! Whether a girl or a guy is making the first move, the uncertainty of asking someone out is usually awkward or a little stressful. If you’re nervous, I would start by asking him to get coffee with you sometime. Getting coffee isn’t too fancy and allows you to be in a public space where you can get to know each other on a more personal level. To that end, sometimes getting coffee can be kind of ambiguous in terms of intentions, so I would say after you get coffee (and hopefully by this point you’ve exchanged numbers) make sure he knows what your intentions are. You can do this!

So I’m gay, and there’s this cute guy on my floor and not so sure if he’s gay. Should I talk to him? How?

My initial reaction was to tell you to absolutely make some moves! Talking to someone you’re attracted to whether physically or intellectually is intimidating amongst other feelings of anxiety, but that interaction can do a lot for you. You could quickly find out this person isn’t someone you want to be involved with, or you could end up becoming close friends with them.

But then I started to question my own advice. All of my thoughts have been based on my own experiences, and I think it would be heteronormative of me to assume that you would be in the same position as I would be in trying to talk to someone romantically.

This question actually really got me thinking about sexuality and romantic interactions. As someone who is cishet, I have to admit I haven’t spent enough time thinking about queer sexual experiences, and concerning this question specifically, I haven’t thought about how navigating relationships would be different.

When I think about talking to someone I’m interested in, I assume they’re hetero, and from my experience when I’ve been wrong I have been faced with nothing but kindness. For some reason – **cough cough heteronormativity and toxic masculinity** – if you were to assume someone was queer, there’s a chance that their response could be extremely negative – god forbid a straight, cis-gendered, testosterone-filled man is thought to be gay.

In an ideal world, if this guy turns out to be hetero he would just tell you he wasn’t interested, but there is part of me that fears that he could treat you terribly. That being said I wish you resilience, I wish you love and I wish you the kindness that everyone deserves. If you decide to talk to him (which I still think you should), I would say you should ask him to go to the beach sometime or maybe do something in a group.