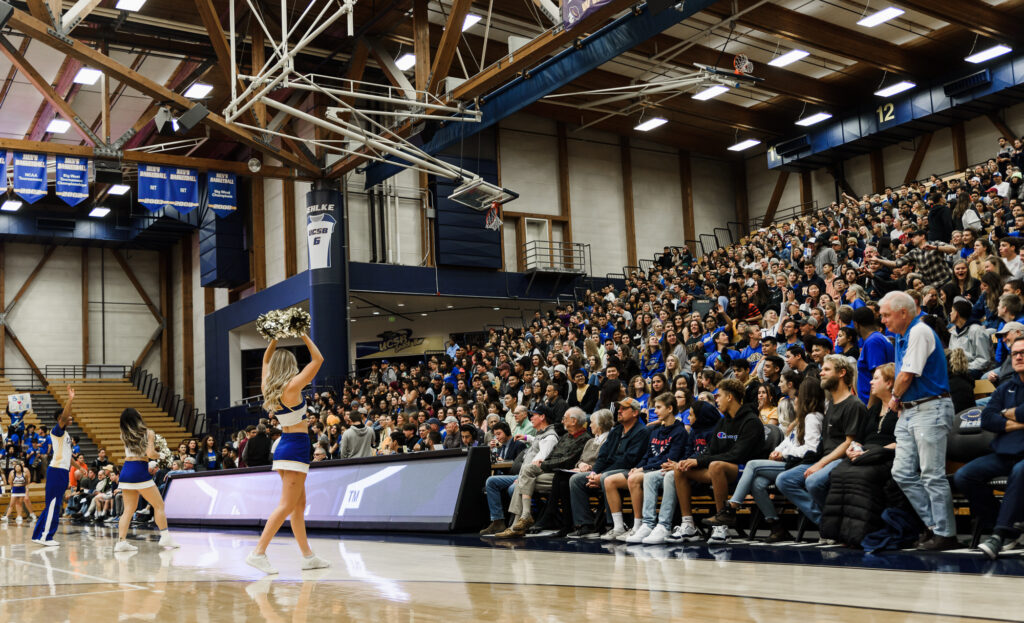 4,800 people were in attendance for the Gauchos victory. Siavash Ghadiri / Daily Nexus

Heading into the final stretch of the season, the UCSB men’s basketball team walloped both No. 3 Hawai‘i on Thursday and No. 2 Cal State Fullerton on Saturday to move into the third spot of the Big West.

Following the long weekend at home, Santa Barbara improves to 19-8 overall and 8-5 in Big West play with the recent two triumphs in the Thunderdome. Through two seasons with Head Coach Joe Pasternack at the helm, SB is 23-4 at home.

“We lost a couple games this week, and I think everybody jumped off the bandwagon,” said Pasternack. “What our guys did is they honored the process this week … When you honor the process results will follow.”

Well, the results followed like a tail on a dog.

The Gauchos ripped into Fullerton with a 82-67 win against the Titans as four ’Chos hit double figures, with junior guard Max Heidegger coming off the bench to lead with 19.

In the back court, sophomore JaQuori McLaughlin posted 16 points along with his second consecutive seven-assist performances for back to back games as the Gaucho’s leading distributor.

After UCSB lost in Fullerton during the first meeting between these two teams, the Gauchos opened up on a 22-4 run as Heidegger and freshman guard Sékou Touré took over to ensure an early lead.

The Titans stormed back to cut the deficit to 10 points with a 36-26 score at the break behind 12 points in the first from senior Kyle Allman, Jr.

Senior guard Khalil Ahmad pounded the rock in the second half with 20 points on 8-11 from the field en route to a 27-point, four-rebound, three-steal night.

Although it looked like Fullerton was poised to make a comeback, the Gauchos broke it wide open with 14 from Amadou Sow on 5-6 shooting in the second.

With 2:12 remaining on the clock, McLaughlin caught a pass from graduate guard Ar’mond Davis on the left wing and immediately elected for the dribble drive.

The sophomore split the defense and took it right down main street with an open lane to the rack and an exclamation point finish with a flush to put his team up 77-61, and ice the game for UCSB.

Santa Barbara out-rebounded Fullerton 39-24 to get the win while six ’Chos had four or more boards.

The win against Fullerton came just two days after the Gauchos blew-out Hawai‘i 79-61 to snap a three-game losing streak.

Sow was the hero against the Rainbow Warriors with 18 points on 6-10 shooting along with eight rebounds and three steals.

UCSB forced 16 turnovers against the Hawai‘i and limited theirs to only nine giveaways while the ’Chos capitalized on the mistakes of the ’Bows with 29 points off of their takeaways. On top of that, SB mounted 16 assists after averaging just seven in its previous two matchups.

“The biggest thing about our offense and why we were successful is there’s a correlation when we have 10-15 assist, and we had 16 assists to nine turnovers. JaQuori McLaughlin had 8 assists, zero turnovers. When we’re moving the ball like that, we’re going to be tough to beat because we have so many different guys that can score,” added Coach Pasternack.

While limiting UH to just 10 free-throw attempts and holding Hawai‘i to just 2-11 from deep, the Gauchos went into the half with a 30-19 lead.

In the second half, Sow and Davis each fought for 12 points and rebounded well to blow the ’Bows out of the water.

The Gauchos’ bench outscored opponents 46-14 over the weekend which significantly attributed to the two thrashings against top Big West teams.

For its final home game of the regular season, the UCSB men’s basketball team will host Long Beach State next Thursday, Feb. 28 as things are expected to be chippy in the Thunderdome with a 7 p.m. tip-off.