The Daily Nexus
Opinion
Argument in the Office: Quarter vs. Semester System
February 25, 2019 at 10:00 am by Autumn Murphy and Carla Wenzel

The Quarter System is a Half-Baked Approach to Education

My friends back home in Berlin are just starting to enter the panic mode that gets you through your finals. So far, their semester in Germany has been going rather uneventfully and besides a presentation in class, give or take, the pressure is minimal. On the other side of the pond, I have already experienced my first breakdown during finals week and enjoyed the major relief period after. Now, at UCSB, some of us are already preparing for upcoming finals.

I want to share some of the advantages that the academic system in Berlin has to offer over the UC’s academic system. The major difference that comes to my mind is the length of the terms: semesters versus quarters. The term length directly relates to the depth of the education — or rather the lack thereof.

If you compare the quarter and the semester system, six-month-long terms are superior to three-month-long terms because they give students the opportunity to really internalize complex topics. I like the fact that I get to learn about more topics in one academic year in the quarter system at UCSB. Nevertheless, I believe that 10 weeks is just not enough time to truly get to the bottom of any topic.

The problem is not due to the total amount of time spent to study a specific topic because the units for every course are equivalent between the systems. It is rather the fact that a class taken in 10 weeks requires a much faster learning pace than one required by the same class in the semester system. The speed of the quarter system requires students to plan ahead and prioritize whichever quizzes or presentations are next. This style of learning may encourage stress management and multitasking. Above all, however, the quarter system teaches students to only learn content that will appear on the exam and to forget all “irrelevant” information.

No question: the quarter system allows you to cover more topics in one academic year and if you are unhappy with your classes,  you only have to get through the 10 weeks. However, if you decide to go to college, you should be interested in the material you are studying or at least have a future career goal in mind that makes pushing through tough classes worthwhile. The purpose of studying at a university involves getting to know all different angles of a topic and then learning to argue on the basis of this knowledge. In general, the broad education of the quarter system lacks the depth of the knowledge gained in the semester system.

The quarter system teaches students to only learn content that will appear on the exam and to forget all “irrelevant” information.

There is one more specific aspect that I really like about the semester system: students are required to write long papers. Yes, you read that right — I want to write more than just the casual four pages, double-spaced. Speaking as an undergraduate student in the social sciences, I believe it is important to have the chance to write up to 20 pages about a scientific problem in your field. As a part of this journey, undergraduates should have the opportunity to explain and understand difficult material step-by-step, by writing not only summary papers but also argumentative ones with a theoretical background.

College is also a time to develop your own views on the world. This process takes time and involves the opportunity to take wrong turns. Once students have stepped out of the university context into the real world, there will not be as much time to question one’s own view over and over — so why rush through university like it is a crash course?

The quarter and semester systems have different goals. While the quarter system allows students to gain a broader view on many different topics and teaches them to work efficiently under high pressure, the semester system leaves more time to approach difficult material in-depth. Rather than rushing through many different subjects and only remembering a few parts, I would rather take the extra time to expand my knowledge and be able to think outside the box.

Carla Wenzel encourages students of the quarter system to think beyond a surface level about what they are learning. 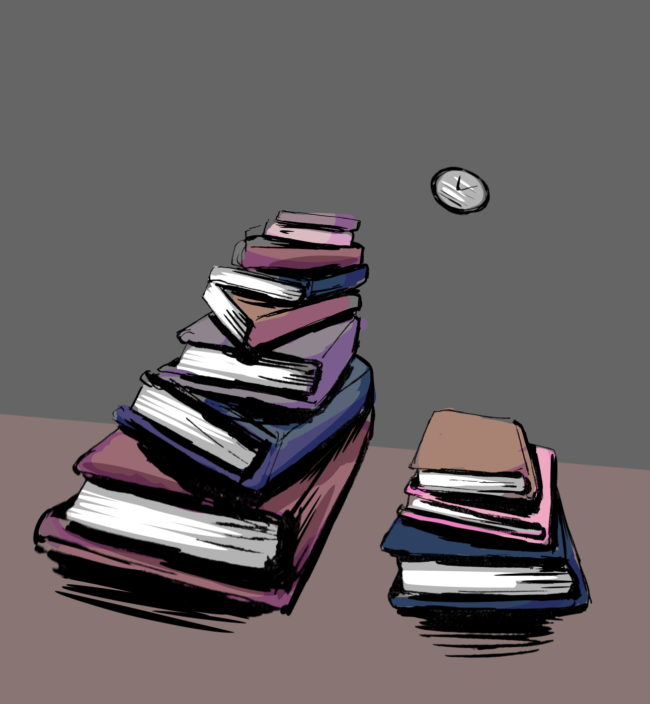 UCSB students love to hate the dreaded quarter system. Ten weeks, 12 units minimum and never enough time to soak in the information that you’re given. The quarter system does not fare well for people who aren’t on top of their game, as they slip through the cracks when midterms and assignments pile up. Even staff complain that there’s not enough time to know all of their students, and before we know it, the quarter is over.

As a transfer student from a community college, I have the benefit of having experienced both systems. The quarter system is superior because you’ll never get bored. Students have freedom to wiggle around with their majors, along with being able to take summer sessions to make up missed units during the year. It’s not uncommon to double major here, and some students even take on a double minor on top of that. When I first got here, I thought people were lying to me when they said they took on multiple majors, but I soon realized that this was possible when I was exposed to the amount of time the quarter system gives them. The quarter system gives us just that: freedom.

Granted, it doesn’t give us time to relax at all, especially with midterms starting in week two, but as soon as you know it, the quarter’s over and you’re onto a new round of professors and TAs. If you hate a certain someone in your classes, whether it be a strict grader or a professor that can’t teach, you end up leaving them in less than three months, instead of spending almost half a year relying on them as you would on the semester system.

The quarter system gives us just that: freedom.

If you fail a class on the quarter system, it’s simply not as big of a deal as failing a class on the semester system. The quarter system gives students the ability to retake failed classes at any given time. It’s even apparent in the culture. If you failed a class at my community college, it would set you back almost an entire year, and other students would look at you as if you were a failure. Failing classes at UCSB is almost so commonplace that no one bats an eye at you if you do it because there’s always an opportunity to recover and it doesn’t necessarily make you look like a bad student.

Since most semester students only have eight semesters to complete college in four years, compared to having twelve quarters, it is crucial for them to map out a four-year plan in their first year. Students with time-consuming and research-intensive majors have to course-related decisions quickly, as changing majors can have significant setbacks. Unlike the semester-system schools, UCSB allows students to take classes they want to, whenever they want to, which may be a reason why we have so many students tacking on multiple majors and minors.

Packing classes into such a short time frame may seem counterintuitive because of the perceived lack of depth, but it allows students to find their strengths and weaknesses early on. Community colleges may even be better off overall with the quarter system, as students there have even more freedom than UC students do, thanks to lower tuition costs and fewer specialized courses such as general ed classes. If all colleges had the quarter system, the transition from the semester to quarter system would potentially be less harsh, and students would be able to transfer out faster.

The quarter system also allows students to study abroad without missing much school. As I am preparing to study abroad in Australia for next fall, I was astonished at the number of units I was receiving: a sheer 24 quarter units minimum. I was worried about missing time at UCSB as it will be my last fall quarter here. But as I thought about it more, a quarter is only 10 weeks and I won’t be missing that much — I.V. can only change so much while you’re away. Even if you go abroad during the spring and miss two quarters, you still receive the same number of units you would at home. You would even have time to come back and take short summer session classes to make up any units you missed while away.

Whether it be receiving more units or being given more leeway in regard to your studies, the quarter system enables students to get the most out of their college experience.

Autumn Murphy encourages students to think more deeply about how the quarter system benefits them.