The Daily Nexus
Self Study
Growing Up Mixed
February 21, 2019 at 3:49 pm by Kian Karamdashti

“We might need to hop that fence, but you have experience with that right?”

I am a mixed male, a product of an Iranian father and a Mexican mother, and when I was a kid, I didn’t really notice the lack of uniformity I held with the different environments I lived in. My friends and I shared the same interests in sports, Yu-gi-oh and Nickelodeon shows. My family swaddled me with support and encouragement at every roadblock and significant event in my young life. From my young and ignorant perspective, I was by all means perfectly in tune with everyone around me. 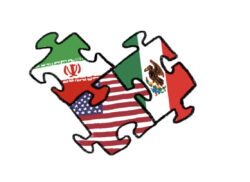 It wasn’t until high school that the veil was lifted off of my intersectionality. I went to a 50 percent white school system on the border of two rich suburbs where most of my friends lived. Until I was about 15, I truly believed I fit right in with my surroundings. However, things started to change as I grew older and became aware of the uniqueness of my situation. I was one of the few in my friend group who had been followed by workers in grocery stores, randomly searched at airports and been the target of racist statements. Although my classmates may have viewed these remarks as innocent jokes, I believe they promoted toxic beliefs about my own identity. What bothered me more was that not only did my classmates think it was okay to make these comments, but expected me to brush them off. When I expressed my discomfort, I was accused of “being sensitive” or “acting like a pussy.” I had grown up with these people, shared experiences with them. Why would I find these comments offensive if they didn’t?

It kind of made sense, didn’t it? My skin was relatively fair for a brown kid. I benefited from an above-average public school system and never really had to worry about money at home growing up. I never learned Farsi and couldn’t participate in many of the family conversations on my dad’s side, while my Spanish three-level vocabulary left much to be desired on my mom’s side. I had not immigrated to the country by myself as my dad did at 14, and I was never forced to drop out of school and join the army like my Mexican grandpa did to gain American citizenship. My family did an incredible job creating opportunities for me, and due to this, I felt I could not fully relate to them.

It felt as if I was in this complex, overlapping Venn diagram in which I somehow ended up in a category all by myself in the middle. I was too privileged to identify with my family and too brown to assimilate into the environment afforded by my friends at school. I could sense the disappointment in my extended Iranian family’s faces when I informed them I couldn’t speak Farsi. According to my mom, my first name was almost Pablo, yet I could sense the confusion on my opponent’s face when I used Spanish on the soccer field when we played a predominantly Latino team. Gaining full acceptance without alienating the other half of me was not something I was going to achieve. Growing up I only really had to worry about my grades, girls and soccer and I felt extremely guilty about it. Guilty that I had simply settled with not immersing myself in the worlds my separate environments provided.

And I still kind of do to this day. It’s not something I can fix or change. It’s how I grew up, it’s part of my identity. I am never going to fit the typical profile of either of my cultures, and accepting that was the first step to feeling okay about it.

In American culture, there seems to be conflicting expectations regarding the conduct of minorities, especially for mixed-race populations. The authenticity of President Obama’s blackness was constantly questioned due to his white mother, yet he was held to arguably the highest standards any American president has had to face due to his skin. Critics of Colin Kaepernick have repeatedly called his movement and its message invalid due to the fact that he was adopted by a white family during his childhood, yet he still finds himself blackballed by the NFL more than two years later. There seems to be a switch the American majority can choose to flip whenever the situation calls for it. Whatever side of you that fits their narrative is the one that is going to be highlighted to match the current agenda. It’s why growing up people from school felt they could make racist jokes at my expense and question my Latino heritage due to “not speaking Mexican” the next (I could go into the problematic racial implications of that statement all day, but that’s a tangent for another time).

It felt as if I was in this complex, overlapping Venn diagram in which I somehow ended up in a category all by myself in the middle. I was too privileged to identify with my family and too brown to assimilate into the environment afforded by my friends at school.

As I struggled to navigate my way through the contradictions and code-switching, I quickly realized that there was no manual for me to follow. There was very little, if any, representation in media that could have provided a blueprint for how to conduct myself growing up as mixed-race individual in American society, much less as a growing Mexican-Iranian man. Not one show. Not one famous athlete. I eventually realized that I was one of the first people to grow up on this frontline of mixed-race America. When I was 16, that kind of terrified me. As I grew older and began to understand the racial transition in which this country is going through, I’ve realized that people like me will represent a normal occurrence in society. At 21, this realization that used to frighten me is now almost exciting.

I can count the number of Iranian-Mexican people I’ve met in my life on one hand, and two of them are my cousins. Yet America is changing, whether the old white people like it or not. More of me will come, and soon America will live up to the “melting pot” name with which it so exuberantly brands itself. I am a mix of two minorities, yet I have opportunities that are simply not granted easily to people who share either of my identities. My authenticity may always be questioned, and probably for good reasons. I am not my ancestors, I have not lived their lives. I am not them. But it’s important I take the advantages I’ve been given and the future platforms of expression that I may receive. My family didn’t work this hard for me to be stuck in some box you check on a census. How else will this country move forward if minorities are continually hit with some sort of excuse for their success when they break the barriers built by years of systemic suppression? Just because I can’t be easily categorized doesn’t mean I don’t have to live the rest of my life with an asterisk next to it.

Kian Karamdashti is starting to become content with being an outlier.

thank you for sharing your story

I appreciate you sharing your narrative because it provided a valuable perspective and a pat on my back for not allowing myself to assimilate into this society because it was just ‘convenient.’ We’re both two peas in a pod but you’re definitely still a vegetable.