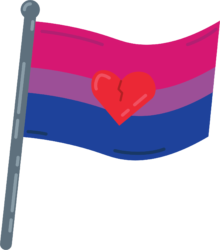 I identify as bisexual. So coming out as gay in high school while also having a boyfriend was pretty confusing for everyone, myself included. In fact, being bisexual is probably the most confusing thing I’ve ever experienced. It meant that I could deny my very obvious attraction to girls because I had a crush on a boy that one time at summer camp. Nowadays, I definitely know who I am, but that doesn’t stop things from being confusing.

A couple years ago I learned about implicit bias. Implicit bias is an unconscious bias that we develop as a result of our environment. I learned about it in the context of racism, but it can apply to any oppressed group: women, LGBTQ+ people, disabled people, etc. I could never have an implicit bias toward myself, could I? Here’s something I must confess: I am biphobic.

When I was first discovering my sexuality, I wanted nothing more than to be straight. Now that I’m out and proud, I just wish I could be “fully” gay. I’m currently in a relationship with a woman, and I still don’t feel gay enough. I want to erase any history I have with men because every time I think about it, my toes curl. When people say things like “bisexuals are greedy and they need to pick a side,” “bisexuals will always cheat,” or “bisexuals are gay people who are faking it,” I don’t necessarily disagree. Don’t get me wrong — I know in my heart these things are not true, and if anyone were to say it about my friends, I would shut it down. But if someone were to say it about me, I’d say they’re right.

Biphobia is very real, and when I’m faced with it (either from others or myself), it can be hard to deal with. But despite this, it’s important for me to recognize the specific privilege that I do have — nobody in my life has looked at me for the first time and assumed I wasn’t straight. I am passing because I present myself as very feminine. Passing means I have to come out to everyone I meet, but it also means I have the privilege to choose whether or not I want to come out in the first place. This privilege keeps me safe, but it also gives me another reason not to accept myself.

When I was first discovering my sexuality, I wanted nothing more than to be straight. Now that I’m out and proud, I just wish I could be “fully” gay. I’m currently in a relationship with a woman, and I still don’t feel gay enough.

If I had a dollar for every time I thought I didn’t deserve to be considered LGBTQ+, I would have paid off my student loans by now (just kidding, I’ll never pay off my student loans). Because I don’t “look queer,” I don’t experience oppression, and that means I shouldn’t be included in the acronym, right? That’s what I tell myself. I’ve been called an “uneducated fag dyke whore” because I wrote about gay sex online, but that’s apparently not homophobia because I’m only half gay and I don’t have “lesbian” tattooed on my forehead. So why do I feel like “fag dyke whore” is a personal attack on my identity? I don’t deserve to feel that way because I haven’t earned it — right?

I’m biphobic, but I’m working on it. Self-love is a long, hard journey, and sometimes, it’s a journey we didn’t even know we had to take because our implicit, internalized bias hides from us. It hides behind ignorance and explanation, but it must be acknowledged and fought. When you live in a society that teaches you to hate things that are different or that you don’t understand, it’s so easy not to love yourself. We are taught to hate our bodies in as many ways as possible, whether it’s the size of our thighs or the color of our skin or the shape of our eyes. We are taught to hate who we are, whether or not we feel like a girl or a boy, or both, or neither. We are taught to hate who we love — whether you’re a boy who likes boys, or a girl who likes girls, or if you like both. But I don’t want to hate anymore. Two decades of internalized hate may take a lifetime to unlearn, but I’m finally ready to start trying.

Anabel Costa wants to remind fellow Gauchos to love every part of themselves, even when it feels impossible.

thank you for this <3