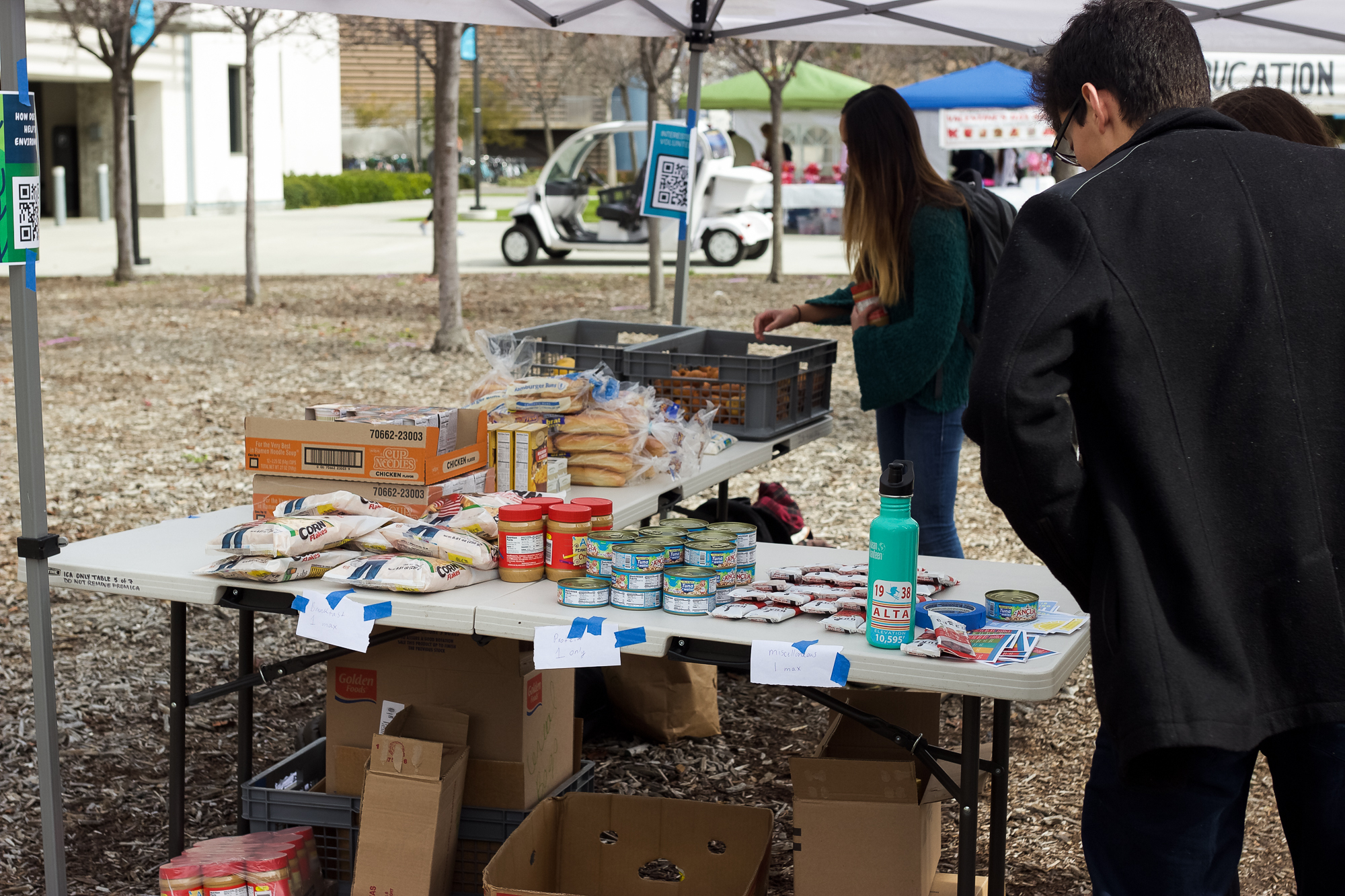 The pop-up event was planned by Emily Caughman, Tori Yanco and Gustavo Ortega-Negron and grew out of a project for a social marketing and communication class last quarter.

“I know what it means to be food insecure on a regular basis,” Yanco said. She hopes to use her experience to host events like these and make students aware of the resources available to them on campus.

Caughman echoed a similar goal for the event.

“We knew we wanted to do something to reduce food waste,” Caughman said. “Through our research, we found that a leading cause of food waste stems from the food in circulation not being distributed efficiently, so we decided to survey UCSB students to see how much they knew about the A.S. Food Bank.”

The survey results showed that many people were unaware of the A.S. Food Bank (A.S. FB)  or found it to be inaccessible to them. This gave the team the idea to bring the A.S. Food Bank to the people, in one of the most heavily trafficked parts of campus during one of the busiest times of the day, according to Caughman.

The event was deemed a success by the team, with 53 students receiving free groceries from the pop-up event in the one hour they were open. Groceries included items such as cereal, peanut butter, pears and noodles. 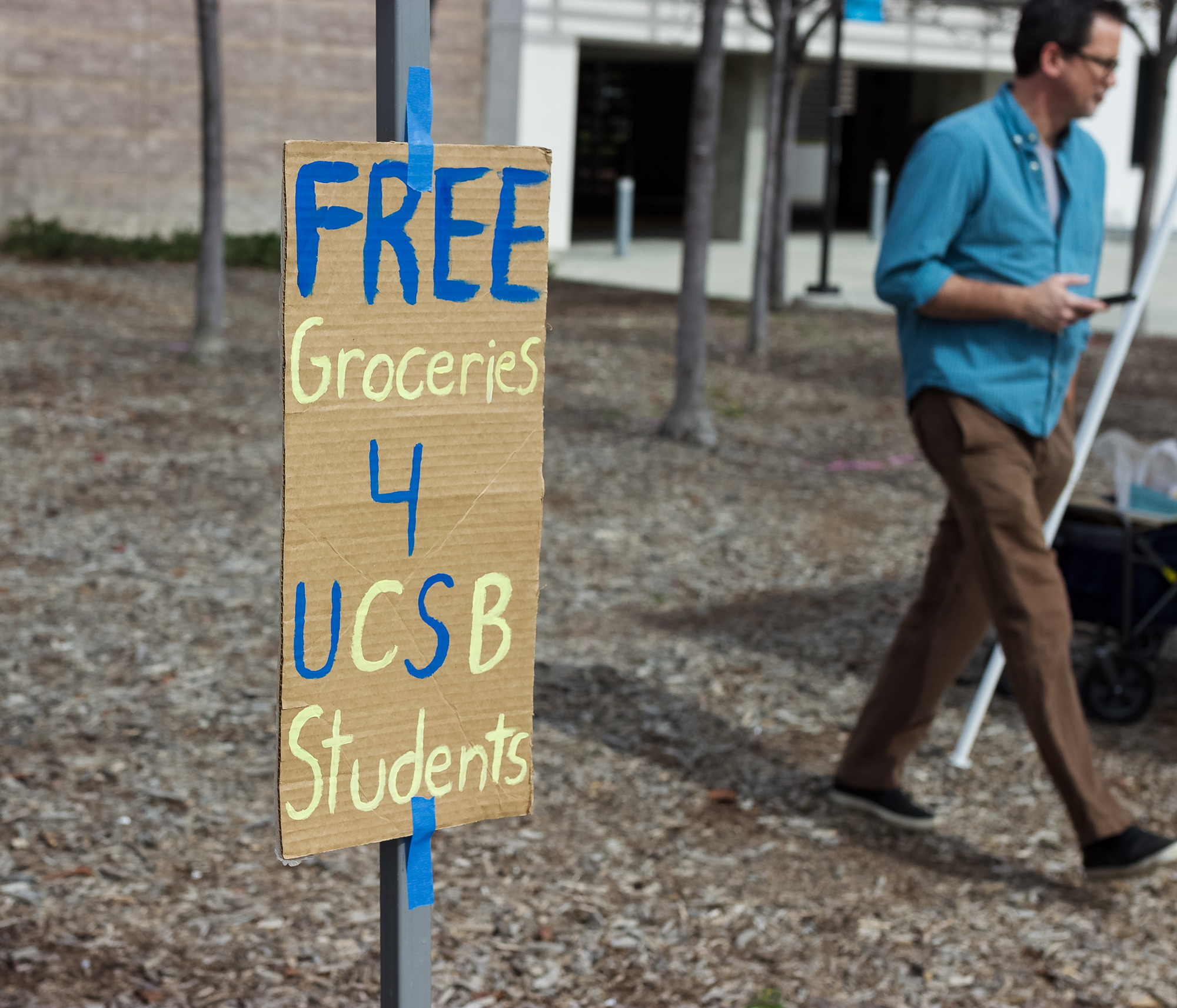 “We had a line before we even opened, and we had two of our sign-in pages, front and back, completely filled,” said Caughman, a fourth-year economics and communication double major.

“We had a great mix of A.S. FB frequenters, those who registered a while back but have only been a few times and new-registrees, which was exactly my hope for the event. We’ve had a lot of people come by just in the hour that we’ve been opened, and we hope to have even more next time.”

The team plans to continue hosting pop-up events in upcoming weeks to give students an accessible way to reach the Food Bank. The next events are arranged to take place on Feb. 26 and March 12 from 12 p.m. to 2 p.m., Caughman said.

“I wish more students knew about the A.S. Food Bank in general,” Caughman said. “I also wish students understood that visiting the Food Bank, especially for things like fresh produce, can have a profound effect on mitigating food waste. The produce may not always be as aesthetically pleasing as what you see at the grocery store, but I can assure you that it tastes just as good.”

Since its formation in 2011, the A.S. Food Bank has grown to serve over 2,000 students per week, according to the organization’s website. Students who earn less than $14,484 per year, not including loans, financial aid or parental income, are eligible to receive free groceries.

Throughout the school year, students can visit the A.S. Food Bank to pick up free groceries on the third floor of the University Center from 9:30 am to 6 p.m. on Mondays, Wednesdays, Thursdays and Fridays.

Students can register at foodbank.as.ucsb.edu/register-today.

Amira Garewal is a staff writer at the Daily Nexus and can be reached at news@dailynexus.com.