The Daily Nexus
Student Gov
A.S. Senators Fail To Adhere to Transparency Resolution Passed Weeks Ago
February 7, 2019 at 12:04 am by Sanya Kamidi and Simren Verma

Failing to adhere to their own resolution, several members of the Associated Students Senate did not create their public Facebook pages by the end of week two deadline, Jan. 19. 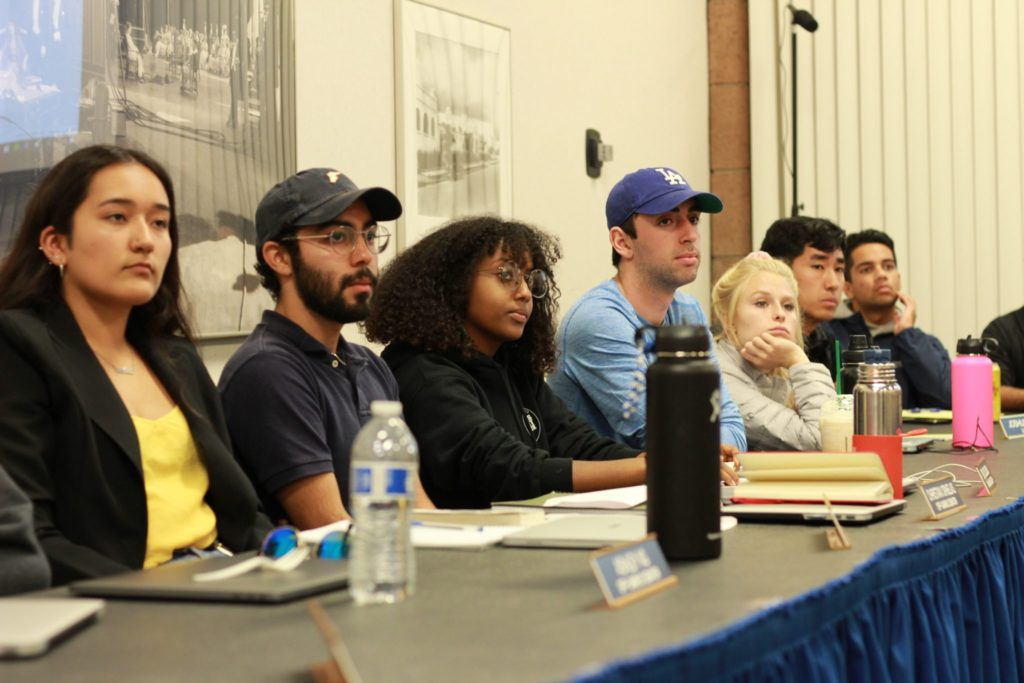 The resolution was passed during the Jan. 9 Senate meeting in week one. Sanya Kamidi / Daily Nexus

The original resolution, written by Off-Campus Senators Christian Ornelas and Rafael Cornejo, required every senator to create a professional, public Facebook page to improve the transparency of the Senate and make senators more accessible to their constituents.

Ornelas was tasked with updating the Associated Students (A.S.) Senate website by the end of week three of Winter Quarter. The resolution also directs the Senate to send out a University Announcement to the student body “to inform constituents about the website and how they can get in contact with senators.”

Neither have been completed as of the beginning of week five. The resolution was passed during the Jan. 9 Senate meeting in week one.

Ornelas said that updating the website was more complicated than he had originally imagined. He has been working with A.S. Web Developer JudyAnn Dutcher to make the necessary updates.

“It’s just so complicated and not really user-friendly,” Ornelas said. “Honestly, it could happen by the end of this week, just to kind of make it like the [Finance and Business] visual builder, where I can just go in and edit stuff.”

Ornelas also said he would try to get the University Announcement sent out by the end of the week.

On Feb. 4, when the Nexus reached out to Senators Nima Bencohen, Adam Chohan, Yasamin Salari, Alex Funk and Andrew Nguyen, they had not created their public Facebook pages.

Bencohen’s Facebook page went public less than an hour after the Nexus reached out. He thanked the Nexus reporter for “honestly reminding” him to make the page.

“I was asking for assistance from one of my friends with making some of the graphics for the page and he has not been responding to me so this will do for now,” Bencohen added.

Chohan said in an email to the Nexus that he had not made the page before the Nexus emailed him.

“I had been posting my Senate information on my Facebook. My office hours were still public, just not on a page,” Chohan added. “Thank you for the reminder.”

Salari said in an email that the making the public Facebook page “completely slipped [her] mind once school became harder after week 2.”

“However my facebook page is now up and running for my constituents to use to reach out to me,” Salari said in an email.

“With that being said I do think that the honoraria of all the senators that forgot to make their facebook pages should be docked since the original due date for the pages was week 2.”

Ornelas said in an interview with the Nexus that he would recommend to Internal Vice President Steven Ho that senators who failed to make their pages by the deadline should have their honoraria docked. He estimated that the punishment should be $10 per week late, although he said it would be up to the honoraria committee’s discretion.

Nguyen said that his page was created late due to personal issues, however he added that those issues are “an explanation, not an excuse.”

Senators Lea Toubian, Carla Cernat and Gabriella Shofet created their pages on Jan. 22, and Senator Yash Nagpal made his on Jan. 23.

Shofet said in an email to the Nexus that since she was sworn in during week two, she gave herself additional time to fulfill the requirements of the resolution.

Toubian said in an email that she did make her page by the deadline, but later deleted it due to not having a headshot. Toubian cleared it with Ornelas first.

Cernat attributed her tardiness to the “tumultuous” nature of the first two weeks, but takes “full responsibility” for creating the page late.

“As I’m sure many students can relate, the first two weeks of any quarter can be an exceptionally busy and difficult time as we try to crash classes, finalize our class and work schedules, get back into a normal routine and prioritize our mental health,” Cernat said in an email.

Cernat is “not sure” how honoraria would be docked or what amount should be docked for senators who did not abide by the resolution deadline.

“If senators’ honoraria was to be docked for creating a public Facebook page late, I would then also expect the executive officers, who receive a guaranteed $3,000 in honoraria, to receive a similar amount of scrutiny and oversight for completing all of their required duties, trainings and obligations as senators do,” Cernat added.

Nagpal said in an email that he did create his page by the week two deadline, but the page “did not go live to the public for a few days” because Facebook required him to complete the entire page, “including profile picture, cover photo, and initial posts” before Facebook “publicized the page.”

He added that he has discussed honoraria being docked with other senators and Ho and he told them that he should receive a dock in honoraria “in order to be fair to the senators and student body.”

The resolution also states that it will be followed by a bill to update A.S. Legal Code to require future Senates to create Facebook pages. Ornelas also plans to implement more structure for how often the pages should be updated and with what.

“I think it’s just interesting to look at maybe who’s updating what Facebook pages ‘cause I know that some just posted their office hours and they haven’t really done other things, but there’s senators that are really utilizing it to post direct resolutions that they’ve passed and kind of just giving updates,” Ornelas said.

Sanya Kamidi is an asst. news editor and Simren Verma is the university news editor at the Daily Nexus. They can be reached at news@dailynexus.com.

this is not news

These articles are like plague. Eventually every journalist at the nexus will be dedicated to writing on A.S.

Seriously – why is this even published?

Senator Bencohen is a legend.