The Daily Nexus
Opinion
How Studying Abroad Improved My Mental Health
February 2, 2019 at 10:00 am by Tiffany Velazquez

My sophomore year of college was the hardest year of my life. Following a surgery that left me in recovery for the better part of the summer, I returned to a campus that I had yet to find my place in for my second year. I worked my way through roughly nine months of Counseling and Psychological Services (CAPS) appointments, my idealism and romantic notions about college long forgotten. And yet, I found in myself a sense of strength and resilience forged from the hardships I had been forced to overcome.

Spending most of my time exploring Goleta and Santa Barbara by myself that year led not only to abundant self-reflection but also to an improved GPA as a result of focusing all my energy and frustration into my schoolwork. I didn’t realize until that following summer that I had improved enough to feasibly consider studying abroad for my final year, a dream I had long since abandoned as various factors seemed to work against me.

My third year of college was significantly better, as I discovered my niche in the Daily Nexus office under Storke Tower and worked my way up to become the On the Menu editor. But after three years at UCSB, I had removed my rose-tinted glasses and realized that this school did not hold the same place in my heart that it did for so many others — and that despite having good friends, I needed to spend some time somewhere else. 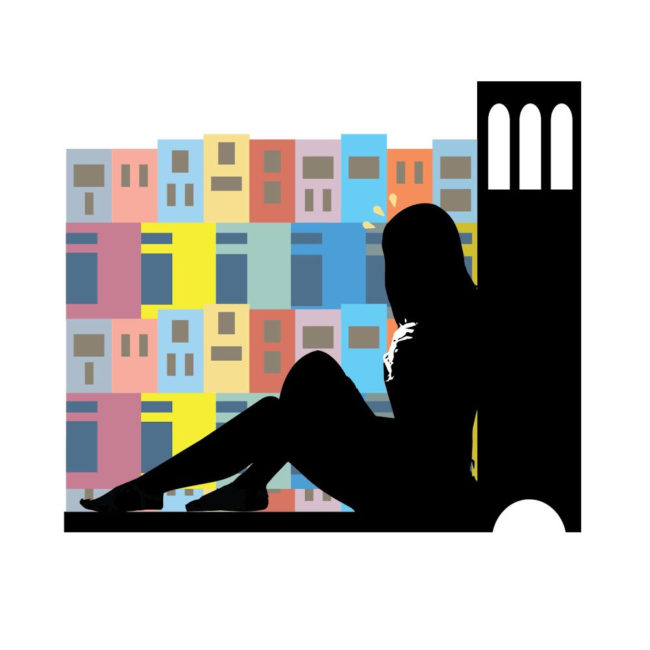 Taking a chance, I jumped into the deep end and submitted my application to study abroad in England in January. Now, after months of paperwork and panicking about what I was about to embark on devoid of any safety net, I find myself reflecting on my experience thus far in my room at the University of Bristol, England.

It wasn’t until I was on the phone with my mom, talking about how much time had already passed, that I realized how unmistakably happy I was. I had come to England with the mindset that I would step fully out of my shell, challenging myself to overcome my social anxiety and make the most of my three months here. And somehow, that’s exactly what I did. I talked to everyone I could and accepted as many invitations to go out as possible, spending very little time in my flat during those initial weeks. I was doing so well that after introducing my flatmate to my group of study abroad friends, she made a comment about how extraverted I seemed to be. For someone who had spent the majority of her college years in her room, it was a marker of just how far I had come.

I owe a lot of my happiness here to my fellow UC Education Abroad Program (UCEAP) students, five of whom are possibly the greatest people I have ever met. Despite telling ourselves that we wouldn’t only hang out with other Americans, I still find myself spending most of my days with them. From impromptu pub crawls to week-long study sessions, I usually see them all at least once a week.

As I write this, I just came back from a weekend spent in Dublin with fifteen other students, thanks to a large group chat that we somehow formed during our international orientation and kept expanding ever since. This Friday I leave for Edinburgh before setting off to Barcelona the next weekend and to London a few days after.

Rather than spending all my time allowing my irrational brain’s constant fears and worries to stand in my way of doing things, I’m simply going out there and getting them done.

The entire experience seems so surreal; I had spent so long thinking that studying abroad was nothing more than a dream. If I was homesick in Santa Barbara, which was only a two-hour drive from my home in Huntington Park, how would I ever survive the over five-thousand-mile distance between home and Bristol?

The most surprising thing about studying abroad has been the significant improvement to my mental health. Rather than spending all my time allowing my irrational brain’s constant fears and worries to stand in my way of doing things, I’m simply going out there and getting them done.

During the summer, right before I was supposed to leave, I hit a wall: my anxiety devolved into a case of a depression that made it hard to leave the bed sometimes. I was beginning to doubt my decision to go abroad without anyone I knew by my side. My family, while well-intentioned, simply encouraged me to look at things in a positive light, overlooking my sudden change in attitude as I counted down the days until my departing flight.

But somehow, I made it to our London orientation in September with a clear mind and a resolve to put my best foot forward. I look at what I have accomplished in the almost two months I have been here and am surprised at how, despite missing home, I am not quite as desperate to return as I thought I would be going in.

Tiffany Velazquez wants you to take a chance on a fresh start by studying abroad.

This is incredible. More students these days should take this message to heart – the way to good mental health is not by sheltering yourself or demanding that the world conform to you, but by taking on a challenge and overcoming it.