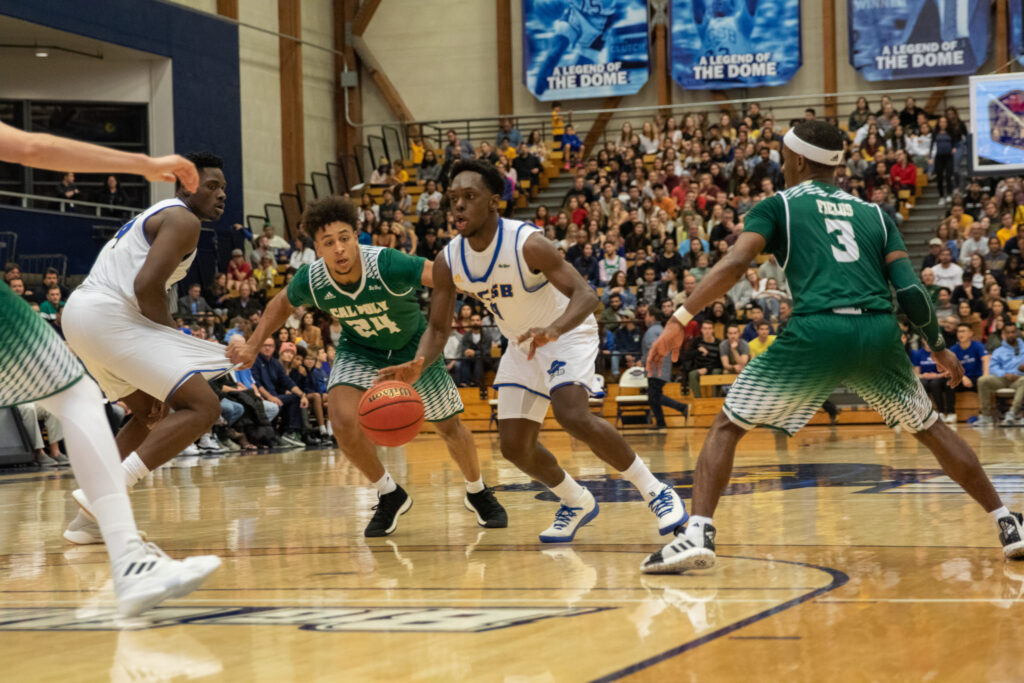 Down two at halftime, captain point guard Devearl Ramsey erupted for a 16-point second half en route to a 20-point night to elevate the UCSB men’s basketball team over UC Riverside with a 72-64 win at home.

Ramsey was sensational in crunch time as he delivered an 86 percent total shooting percentage going 6-8 from the field including 6-6 on shots at the stripe.

Victory in the Thunderdome is nothing new for the ’Chos. UCSB is 9-0 at home this season after its fifth consecutive win to remain atop the Big West with a 2-0 conference record while posting a 13-3 overall mark on the year.

“Down the stretch, we want to make sure we just get the win,” said graduate guard Ar’mond Davis after the game. “We have to protect our home court at the Thunderdome. We love playing here, we love the fans and we have to continue to make sure we stay undefeated at home.”

Four Gauchos hit double-figures as freshman facilitator Amadou Sow was the pulse of the SB attack with a career-high 22 points and nine rebounds from 10-18 shooting, and he came out firing with six of the first eight Gaucho points in the game.  Sophomore guard JaQuori McLaughlin and Davis each scored 12 points in the contest, and in the back court McLaughlin also added five assists with zero turnovers and two takeaways.

Following a swipe from McLaughlin at 14:26, the sophomore pushed his tempo, split defenders and cut to the rack before a swift kick-out pass to Davis who knocked down a triple from the far corner to put UCSB up 11-6.

Although UCSB pulled ahead early, Riverside battled back behind a sharp three-ball attack spearheaded by junior guard Dikymbe Martin. Down 23-18 with seven minutes to play in the half, Martin corralled his own miss and pulled up with a teardrop in the restricted area to cut it to a one-possession game.

After forcing a miss from UCSB on the other end, Highlanders’ redshirt sophomore guard Dominick Pickett nabbed another offensive rebound on the attacking half of the floor with a split-second look back out to Martin who drilled a right-wing jumper from behind the arc to knot it up at 23 apiece.

Rebounding was huge for the Highlanders who led at the half 34-32 following 18 boards before the break and a +4 rebound-margin against the top team on the boards in the Big West.

While the first half belonged to UCR, the Gauchos came to play in the second with a 7-0 run to open up behind five points from Ramsey in the first two minutes.

Yet, Riverside continued to fight. The three ball was working for the Highlanders who had five treys in the second, including a smooth stroke from sophomore forward Ajani Kennedy who tied the game up at 46-46 with 13:37 to play.

Both teams traded threes over the next five-minute frame before Ramsey put his foot down and ultimately took over.

With Riverside up 56-53, Gaucho senior forward Jarriesse Blackmon cut to the hoop and floated under the basket before firing a pass to Ramsey in the corner who nailed one from deep to tie it up at 56.

On the ensuing possession, Ramsey received an outlet pass from Sow and barreled coast-to-coast with a spin in the lane to draw the contact and count the bucket.

“When it’s time to finish the game or when my team needs a spark, I have to pick my energy up,” expressed Ramsey after his 20-point performance. “Whether that’s defensively or offensively, I try to do whatever it takes for the team.”

From that point on, the Gauchos didn’t look back as McLaughlin delivered an alley-oop from 35-feet out to Sow at the basket who threw it down and put the nail in the coffin to hand the Highlanders their 12th loss of the season.

UCSB sits in a tie for first place in the Big West with UC Irvine and Cal State Northridge after a pair of conference games, while Riverside dropped to sixth following a couple of heartbreaking losses to open Big West play.

The Gauchos take to the road for a three-game stretch with their first Big West Conference away matchup at UC Davis next Thursday with tip-off scheduled for 7 p.m. at The Pavilion.