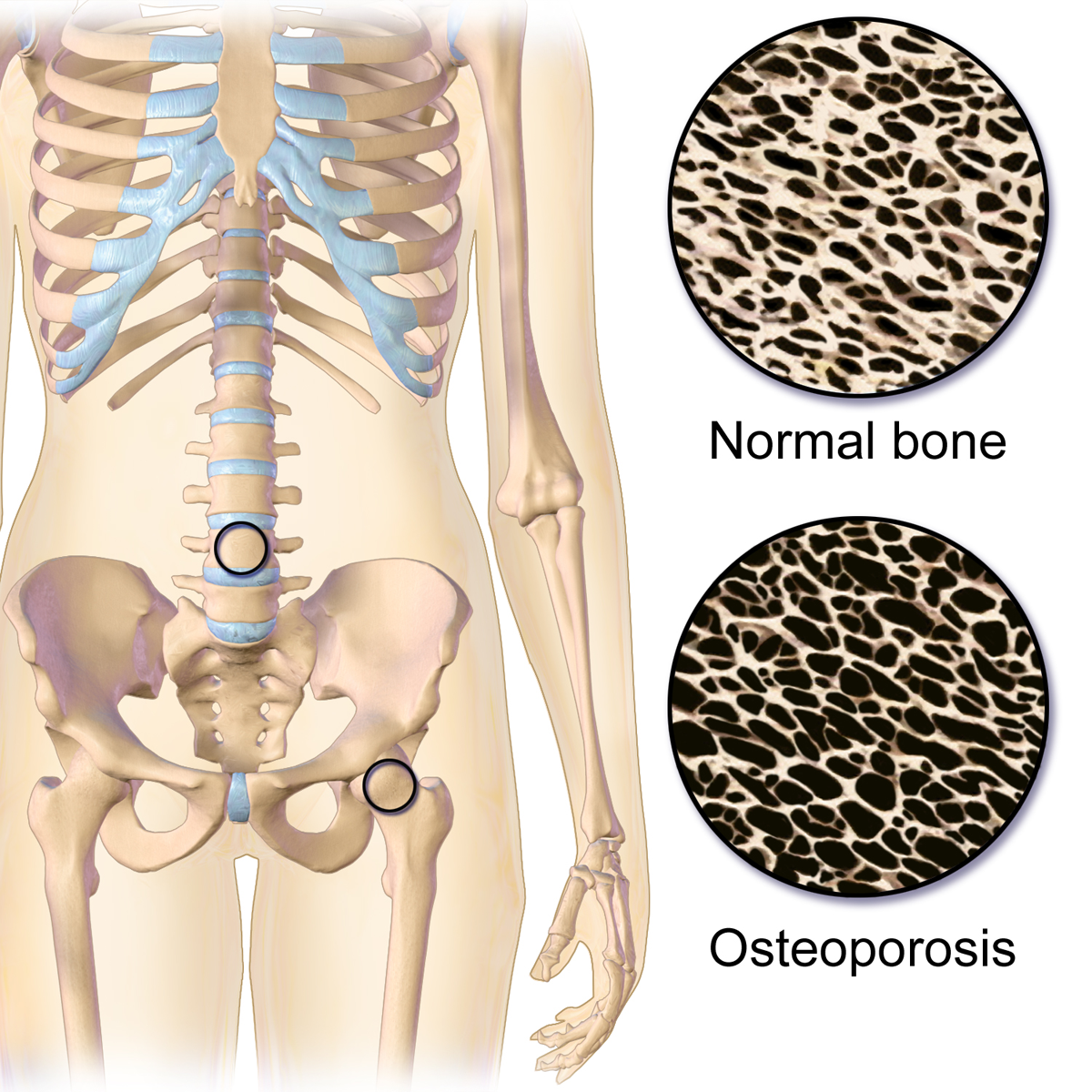 Osteoporosis is a condition characterized by low bone density, resulting in bones becoming porous and thin and increasing the risk of bone fracture. While osteoporosis can affect any bone in the body, the most common sites are the spine, hip and wrist. / Courtesy of Wikimedia Commons

Our bones constantly form and absorb bone tissue throughout our lives. What becomes worrisome is when we have a progressively greater loss of bone density as we age, which could lead to osteoporosis. A disease that causes the deterioration and fragility of bones, osteoporosis increases the risk for bone fractures.

While it affects over 10 million people over the age of 50 in the United States and millions more around the world, osteoporosis oftentimes isn’t diagnosed until one has already experienced a bone fracture. The bone disease is typically tested for by measuring bone mineral density (BMD), which assesses the amount of calcium and other minerals in bones.

However, some studies have indicated that BMD may not be well correlated with predicting fracture risk as there is significant overlap in BMD between healthy individuals and those with fractures. Still, BMD in conjunction with measuring the architecture of trabecular bone itself can provide a fuller picture of bone strength.

“That’s the origin of the project, is to be able to combine this new clinical technique to probe the structure of bone, to validate this technique and identify some markers of the bone structure that can be used to potentially classify whether bone is healthy or osteoporotic,” Chantal Nguyen, a graduate student in the UC Santa Barbara Department of Physics, said.

Along with her advisor, Jean Carlson, Nguyen partnered with local medical imaging startup bioProtonics to consult and assist in validating the ability of the magnetic resonance technique the company developed — called µ-Texture — to probe the texture of various biological tissues at the micron level (µ).

Their study “Novel magnetic resonance technique for characterizing mesoscale structure of trabecular bone” has been published in the journal Royal Society Open Science. To help determine parameters for diagnostic data related to various biological tissues, the researchers started out with bone.

“It’s easy to see the difference between bone and not bone in a structure, so it’s an easier tissue to start off with to study,” Nguyen said. “The differences in the structure of bone are easier to resolve.”

Micro-computed tomography (micro-CT) is the leading method for imaging bone and other tissues at high resolutions. However, micro-CT involves a high level of radiation, preventing its usage on humans in vivo and instead restricting it to small animals and isolated samples.

One method that could be used to image the living human body is magnetic resonance imaging (MRI) though it also faces limitations. MRI cannot achieve the same quality of resolution for bone imaging due to challenges of motion. It takes longer to be able to generate an image than with micro-CT and even involuntary movements from a patient, such as the heart beating or involuntary twitches, can negatively affect the resolution.

(a) and (b) show example raw micro-CT image slices from vertebral body slices, with (b) displaying signs of osteoporosis. (c) exhibits a baseline healthy section of a micro-CT image, and (d) and (e) exhibit the same section at increasing stages of simulated osteoporosis. / Courtesy of Royal Society Open Science

The µ-Texture MRI technique doesn’t actually image the body but samples a region of tissue in question by acquiring data from frequency values relevant to the structure of the tissue, Nguyen said. By taking fewer measurements, µ-Texture is able to overcome these motion limitations. It can still produce high-resolution data that can help in diagnosing and monitoring diseases without the need to acquire an entire 2-D magnetic resonance image.

“What µ-Texture does is it picks out which frequency values are most relevant to the structure that you’re going to probe to then convert that back to images you can see. So it takes that data in a shorter amount of time, and the hope is with that data we’re able to determine some sort of markers that tells us whether a bone is healthy or diseased,” Nguyen said.

“The idea of probing bone texture is not to actually look at or measure the density of bone, because this is a technique of probing bone that is completely distinct from BMD testing,” Nguyen continued. “We don’t want to measure bone density or acquire just a simple bulk measure of how much bone is there, but to actually be able to probe textures, to be able to get markers from this web of struts and see if we can extract information about how thick the struts are, how many struts there are. Some sort of finer detail measures than just ‘there’s this much bone, period.’”

With the µ-Texture technique, the researchers calculated a ratio metric that could distinguish osteoporotic from healthy bone characteristics to identify potentially osteoporotic bone.

One potential limitation is that there are certain wavelength frequencies of trabeculae that the µ-Texture cannot probe. Nonetheless, the µ-Texture technique shows much potential as a rapid, non-invasive method to improve detection and monitoring of bone disease.

While this study focused specifically on trabecular bone, the µ-Texture method can be applied to other biological tissues. It can be used to probe the texture of brain tissue — specifically to detect the onset of diseases like Alzheimer’s, which is marked by the degradation of the neuronal architecture of the brain.

“This technique is, in theory, able to be applied to, for instance, the lungs and the heart, and is able to detect the growth of tumors as well. It can be used for any tissue that exhibits sort of textural changes with the onset of disease,” Nguyen said.

“The ultimate goal is to be able to implement it clinically. If you’re already going to be getting an MRI scan for whatever reason, you could append this µ-Texture procedure at the end of that. It would be very short. Within the context of osteoporosis, the idea is to be able to detect the onset of osteoporosis as early on as possible so that you can implement new lifestyle changes to try to slow the onset of disease.”