A 24-year-old Isla Vista resident was arrested Tuesday night for waving around a handgun and threatening to shoot people at Dublin’s Sports Bar & Grill in I.V., police said. 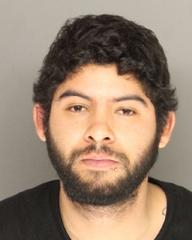 Rios was arrested
Tuesday night for brandishing a gun at Dublin’s.
Courtesy of SBSO

The resident, Anthony Rios, was initially asked to leave the bar at around 8 p.m. because of “his level of intoxication,” according to a press release sent out by the Santa Barbara County Sheriff’s Office (SBSO) Wednesday night.

He then “brandished a firearm and reportedly threatened to shoot people.”

Following the altercation, officers found a black backpack that contained a magazine with two rounds of ammunition in a trash can. A handgun was also found nearby, the press release stated.

The initial press release did not specify which bar this incident took place in. SBSO spokesperson Kelly Hoover confirmed the bar was Dublin’s.

Rios was booked on a $50,000 bail for possession of a pistol with an altered or destroyed serial number, brandishing a firearm in a threatening manner, criminal threats and carrying a loaded firearm in public.

He was released today. Police said he does not have any firearms registered to him and it is not known at this time how he obtained the handgun he pulled out in the bar.

So this guy had a stolen gun with the serial number scratched off, was threatening to shoot up a bar, and they released him?? Wtf. I wonder if his citizenship status has anything to do with it.

Anyone remember where this guy worked? I remember seeing him

Dean Margarett Klawunn intervened in the case. That was why he was released. She always sides with criminals.

Any proof or reality to add to your delusions and lies?