The Daily Nexus
Sports
Dominant Defense Strives to Bring Championship Title Home to Indiana
December 7, 2018 at 2:33 am by Jake Ciccone 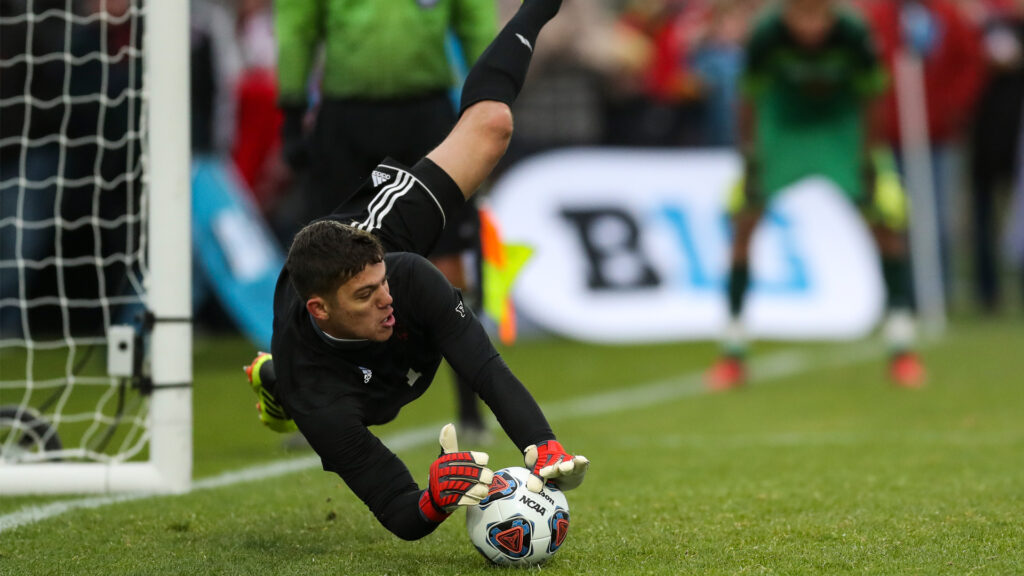 On Friday, Dec. 7, the No. 11 Maryland Terrapins and the No. 2 Indiana Hoosiers will face off during the 2018 Men’s College Cup at Harder Stadium. Maryland comes into the matchup with an 11-6-4 record, while Indiana sports a 20-2-1 mark for the season.

The Hoosiers and the Terps are well-acquainted with one another as they have met twice already this season, with Indiana emerging victorious both times.

The first meeting came in Bloomington, Ind., during Big Ten Conference play when the Hoosiers escaped with a 2-1 win, thanks to a last-minute goal by senior defenseman Andrew Gutman. The second matchup between the two teams came in the semifinals of the Big Ten Tournament, during which Indiana again edged out the Terps in penalty kicks. Both matches came down to the wire and could have gone either way, save for a few miscues and lucky bounces that ultimately went the way of Indiana.

If the game on Friday is also a defensive battle, then it seems that the Hoosiers will have the advantage yet again. They haven’t allowed a goal so far in NCAA play and don’t show any signs of loosening their stringent backline.

Indiana was just as stingy during conference play, in which they led the league in shutouts (12) and goals against (11). They haven’t lost since Oct. 3, and their effort on the defensive end is a big reason why.

Redshirt senior Timmy Mehl and Gutman have been the main players commandeering defense this season, and both already have years of experience competing in the postseason.

Gutman, in particular, has been the main leader of this Indiana squad. He hasn’t been just a defensive anchor; he also has been pulling his weight on the offensive end as well. The defender leads the team in goals (11) and is second in the Big Ten Conference.

The Hoosiers have a loaded roster that contains four first-team All-Big Ten players as well as four second-team players. Goalie Trey Muse has only allowed 11 goals on the season, putting him en route to be named the best goalie in the Big Ten.

Indiana has historically been a fixture in the College Cup. This is its second consecutive year qualifying for the Cup and its NCAA-record 20th time qualifying overall.

The Hoosiers last won the championship in 2012 — the most recent victory for any of the teams in the Final Four — and have nine titles overall.

Even with such an illustrious history, this year’s team is definitely unique.

“This group is a special one amongst the teams we have had,” Head Coach Todd Yeagley explained. “The numbers certainly speak for themselves. They’re very focused, just a wonderful group to coach.”

So far this season, Indiana emerged victorious from the Big Ten Tournament with a 3-0 victory over Michigan in the title game and thus earned an automatic bid to the NCAA Tournament. After receiving a first-round bye, the Hoosiers flexed their muscles against UConn in their second-round matchup, winning the game 4-0 in a match that was never in doubt.

Their second game of the tournament pitted them against Air Force, and the Hoosiers again got off to an early lead with two goals scored within the first 22 minutes of action. From there the Hoosiers rode their defense and held Air Force scoreless for the rest of the game.

Indiana’s quarterfinal matchup came against its interstate rival and the No. 7 team in the country, the Notre Dame Fighting Irish. In their prior meeting, Indiana squeaked out a 2-1 overtime win in South Bend, and Notre Dame was looking for revenge. This game was a battle of two defenses, as neither team could put the ball in the net until the 63-minute mark when Austin Panchot gave the Hoosiers the go-ahead and ultimately the game-winning score.

Maryland is led by a pair of first-team All-Big Ten players in senior midfielder and leading goal scorer Amar Sejdic and junior defenseman Donovan Pines. Although they are a familiar foe, Indiana is certainly not taking them lightly.

“You can’t take one thing away from Maryland and feel like you’ve solved them,” Yeagley said. “I feel that is a strength of our team as well. There are a lot of mirroring qualities between these two teams.”

These two squads have definitely earned the right to play on this stage, and if their prior meetings are any indication, we should prepare for another hard-fought battle that comes down to the wire.