The Daily Nexus
Virtual Reality
The Clickbait Debate: Is Gossip Newsworthy?
December 6, 2018 at 10:40 am by Morgan Wiitala

Although Trump’s many escapades are amusing, journalists have a responsibility to the public to place more media focus on important politics than on clickbait pieces. The media should emphasize policies and hard news so society can stay informed on what matters. 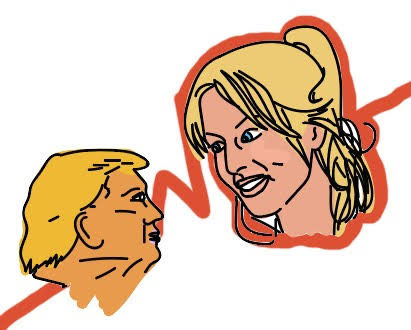 Reporting the president’s affair with Daniels is better suited on outlets such as late night entertainment shows. This story has gained so much attention that Daniels has gone on the Jimmy Kimmel talk show for a 10-minute-long interview detailing her sexual experience with Trump and describing the president’s penis size.

The way Trump is handling his affair also places media attention on the matter. Trump is battling Daniels in court and further publicizes the affair. However, Daniels may be winning as she profits from the scandal by publishing a book titled Full Disclosure that details her life and includes her tryst with Trump. One would think the president would focus more of his attention on the future of our country than on his personal life. His actions dictate the news, therefore affecting media agenda.

Scandals can be relevant enough to cover in the news, but they do not always deserve so much attention. In the age of social media and digital journalism, there are blurred lines between entertainment, fluff pieces and hard-hitting news. By focusing on speculatory stories such as this in the media, we are distracted from serious news. The terrorist attack in Pittsburgh and important policy issues may get brushed aside as individuals are consumed by the latest Trump controversy. In this way, the media controls the information the reader consumes and focuses on.

Having a president who spreads “fake news,” a term Trump coined to describe news the media reports that portrays him in a negative light, also contributes to the spew of misinformation. Trump has even called journalists “the enemy of the people,” which undermines the value of trustworthy news, causing uncertainty in trusted media forums.

Recently, Trump has been rallying to gain support from the public, but he failed to promptly visit Pittsburgh to honor the deaths of the lives lost at the synagogue shooting. The president justified his decision to attend his rally instead, by maintaining that the New York Stock Exchange (NYSE) opened the day after the September 11th attacks. In other words, the show must go on despite terrorist attacks. However, this logic is very flawed given that the NYSE actually did not reopen the day after 9/11. The president is spreading false information to justify his actions.

Journalists have a responsibility to the public to place more media focus on important politics than on clickbait pieces.

Mikel Jollet, political activist, writer and frontman of the band “Airborne Toxic Event,” recently tweeted on how news consumption has shifted during the current administration. “Trump says crazy clickbait thing which isn’t true, News repeats crazy clickbait thing for clicks, People get angry, say ‘clickbait thing is untrue,’ Panels discuss question, ‘CAN Trump do crazy clickbait thing?’ Voters never learn crazy thing is untrue. Repeat.” Although Jollet may not be a political expert, he is an aware citizen who has hit the nail on the pattern of how news is distributed.  The president is contributing to a cycle of fake news to fit his personal agenda. Clickbait is a popular form of media consumption, but it does not do justice in presenting the reader with the truth and verified facts.

Journalists have a duty to society to present trustworthy, accurate news. Yet, many sites are more focused on getting traffic and clicks than being an outlet for individuals seeking reliable news and information.

Some may say that the people have a right to entertainment, too, and that Trump’s scandals should be a topic of discussion in the media. As a country we are entitled to freedom of speech and the freedom of the press, but citizens should have more knowledge of what’s going in the world than of the latest celebrity scandal. This issue could be improved by putting these kinds of stories in the entertainment section and not the breaking news section. As a reader, I often click on the “top stories,” but I would prefer if these stories left me feeling like an informed citizen than as someone aware of a lot of gossip.

Hopefully, journalism can progress in a more positive light when there is a new president of the United States. In the meantime, readers can do their part by not clicking on stories that are clickbait or purely entertainment and seek out news that is fair, unbiased and relevant. Reading news stories from the left and right also provide the reader with a fuller picture of the story. Objectivity is a struggle for many journalists given the political climate, and it’s always recommended for individuals to consume news from several media outlets.

Morgan Wiitala hopes people are able to overcome the urge to indulge in clickbait.