UC Santa Barbara’s Greeks Go Green held a community farmer’s market at Greek Park on Saturday, one part of several projects they’ve taken on to help students practice environmentally sustainable practices both on and off campus. 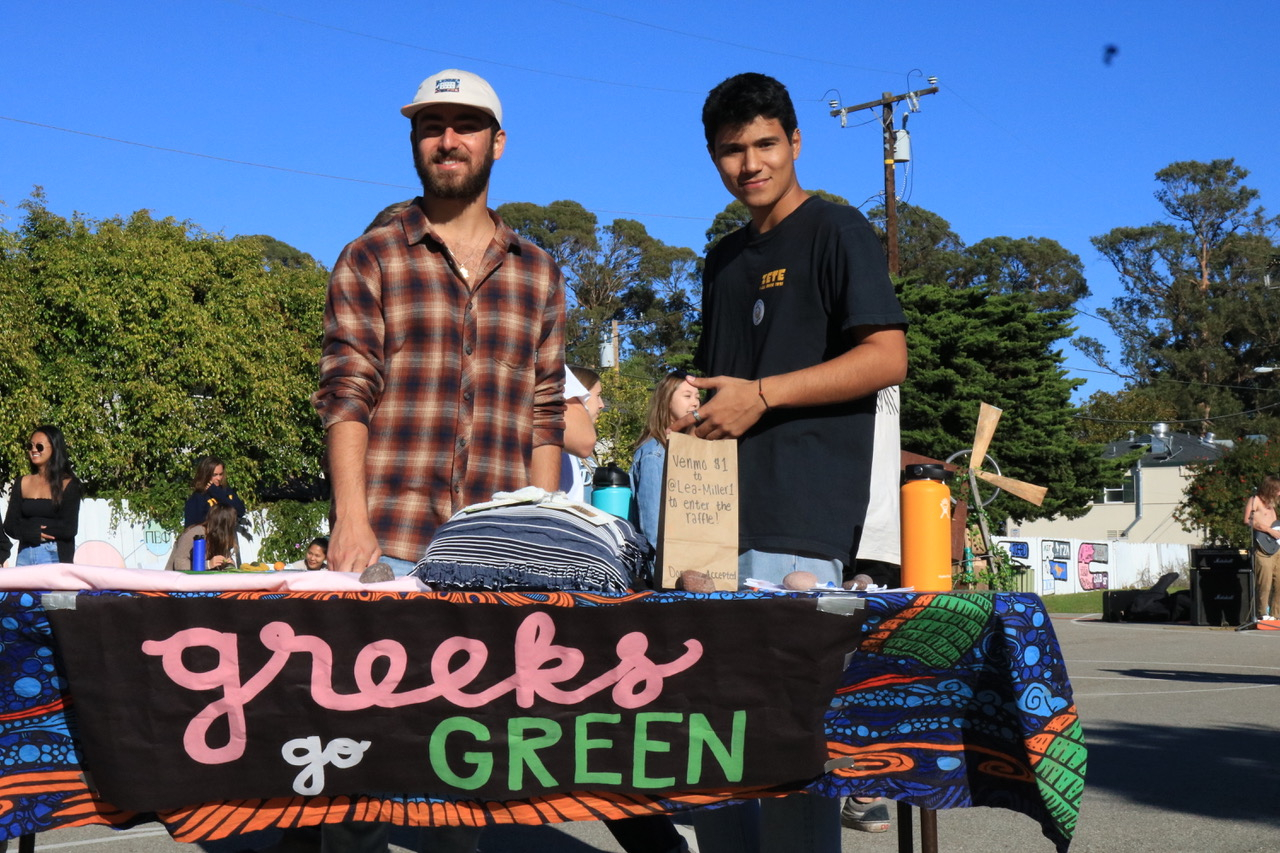 The organization was founded less than a year ago. Courtesy of Nolan Fuss

The farmer’s market, held between 12 p.m. and 3 p.m., featured a handful of campus organizations and local businesses from the greater Santa Barbara area: Blue Ridge Honey, I.V. Food Co-op, I.V. Trading Post, the Climate Reality Project, I.V. Surfrider and the Program for Assessment and Certification for the Environment and Sustainability (P.A.C.E.S).

Some served various types of food, while others showed off art pieces and live music; all promoted “eating environmentally” and environmentally conscious attitudes.

“We’re really hoping to educate anyone [who came to our] event on how to choose your foods, whether you’re at the grocery store or a farmer’s market, and know the story behind everything you buy,” Narlock said.

De Moraes said the organization was first created to address the lack of sustainable practices in Greek life at UCSB.

“Greek life is a massive organization of people, and unless environmentalism is a top priority, it will inevitably generate a lot of waste due to the number of people involved,” she said.

Greeks Go Green is officially recognized by UCSB due to its sponsorship by the Inter-Greek Council, allowing it to have its own budget, according to de Moraes.

It is also entirely supported through donations and fundraisers, she said.

“We did a restoration project with [the Cheadle Center for Biodiversity and Ecological Restoration] and were able to raise $200 dollars from that by planting native plants and eradicating invasive ones,” de Moraes said.

Projects generally take place within Greek life houses, focusing on sustainable practices such as “getting compost and recycling bins in the houses or reducing the use of styrofoam in the kitchens,” Narlock said.

According to Narlock, Greeks Go Green is divided into two subcommittees – projects and events – that plan accordingly in respect to the organization’s quarterly theme. This quarter’s theme was sustainable food consumption, promoted through Sunday’s event. 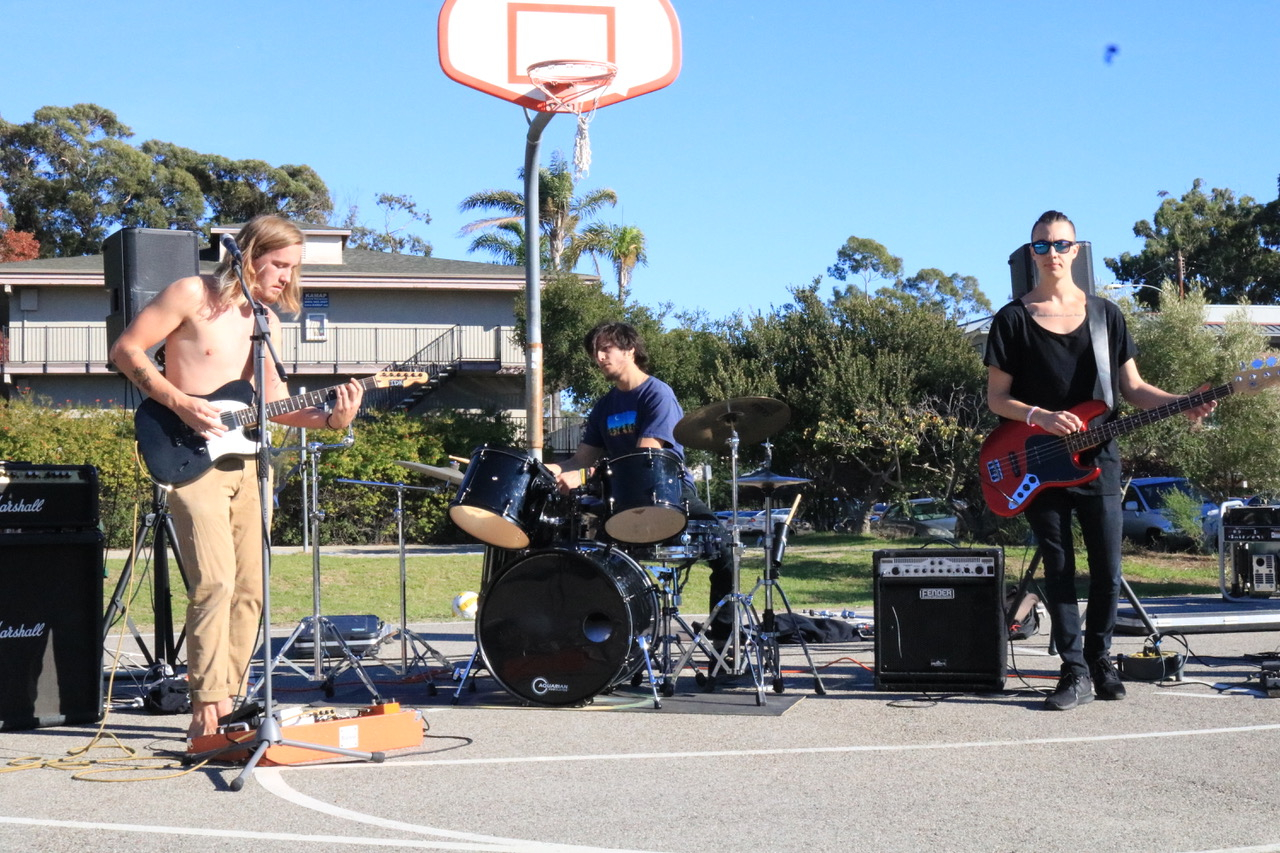 Narlock added that Sunday’s event was planned by the core executive council as well as the events committee.

Last quarter, the organization’s focus was “on sustainable fashion,” he said.

“We partnered with I.V. Trading Post to hold an inter-Greek clothing swap that was open to the community,” he said.

De Mores noted that between 400 and 600 pieces of clothing were diverted from landfills simply through small donations during the event.

For example, Greeks Go Green collaborated with Marborg Industries to create a food scrap collection program. She added that the goal of the program is to divert scraps and waste from participating chapter kitchens and turn it into mulch rather than trash.

“We’ve been able to implement a food scrap collection program in several chapter kitchens, which is a big deal because around 40 people live in each chapter house. In most of them, there is a chef or kitchen staff of some sort that’s preparing the food for everyone in the house,” she said.

“That staff is now diverting those pre-consumer food scraps from landfills by using this food scrap collection program we’ve implemented with Marborg, which is the county’s trash collection service. That compost is going to local orchards and farms in the area in the form of mulch.”

The addition of a sustainability chair in all Greek houses, another key success to Greeks Go Green, provides each chapter with the opportunity and power to make changes regarding its environmental impact, Narlock said.

In the future, he hopes to see a growth in support of Greeks Go Green with the addition of younger members to continue to promote environmental awareness after he and de Mores graduate.

“Our big push through this year is getting some young energy involved in our group. Miranda and I are both juniors, so getting freshman and sophomores involved once we graduate is going to be a key focus for us.”