For the second year in a row, wildfires have ravaged California, forcing people to evacuate their homes and leave valuable belongings behind.

In particular, the recent Woolsey Fire in Ventura had left hundreds of people stranded.  The fire robbed them of their possessions, their homes and their hopes.

One of the people affected by this was UC Santa Barbara alumnus J.D. Slajchert. 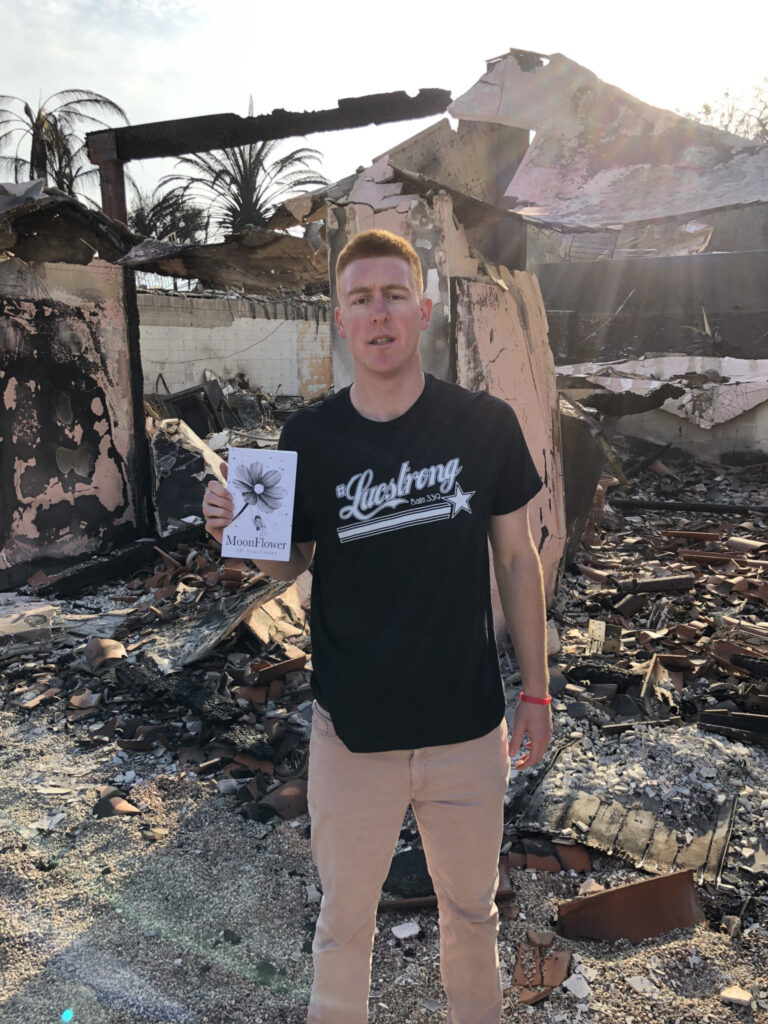 At age 24, Slajchert has accomplished a lot.

Last spring, he graduated from UCSB with a degree in sociology. During his time here, he was a member of the men’s basketball team for four years.

Most recently, he authored a novel entitled MoonFlower, a coming-of-age book that draws on Slajchert’s real-life experiences, including dealing with the loss of his best friend, Luc Bodden, who Slajchert met when he was 17.

Growing up in Oak Park, Calif., Slajchert was one of the stars of the Oak Park High School basketball team. It would be there where Slajchert would soon meet Bodden, a six-year-old with sickle cell disease.

“I remember him coming up to me saying he was so happy to meet me, and he wanted to play basketball with me, and I just knew I had to do it,” Slajchert said.

What Slajchert did not know at the time was that one of Bodden’s last wishes before heading into a year of isolation for a bone marrow transplant was to play basketball with him.

From there, Slajchert’s relationship would continue to grow as he would visit his best friend from behind a glass wall. Something Slajchert remembers vividly from that time is seeing two pictures above Bodden’s hospital bed, one of him and one of Matt Kemp, a star baseball player most notably known for his time with the Brooklyn Dodgers.

Slajchert said that moment put it in perspective how much Bodden viewed him as a hero.

“I was only 17 when I saw that, and to see that Luc felt like I was just as famous as Matt Kemp was amazing,” Slajchert said.

Unfortunately, after four years of being best friends, Slajchert had to say goodbye as Bodden passed away in 2016 at the age of 10.

Writing MoonFlower was one of the ways Slajchert was able to cope with the loss of his best friend. The very first page of the book is dedicated to Bodden with a phrase that says, “Smile more,” one of the last things Slajchert remembers his friend telling him.

After beginning to write the novel on June 30, 2016, Slajchert finally saw one of his dreams come true as on Oct. 14 of this year the book was published.Then, just a few weeks later, on Nov. 9 the fires starting hitting Slajchert’s area of Oak Park. He and his family were forced to evacuate.

“We really had no place to go. I had to call my mom and ask where to go, and she told all of us to pack up and head to Malibu. At the time it was a much safer environment, and we thought it would be all good there,” Slajchert said.

One day later, the fire would jump the 101 Freeway and make its way towards Malibu.

“At the time, I was afraid I was going to lose both houses I grew up in because I had no idea what was going to happen,” Slajchert said.

After safely evacuating once again, this time from his mother’s house, Slajchert turned on the news. Hoping for the best, Slajchert did get some good news as his house at Oak Park was safe.

Unfortunately, the same could not be said for his house in Malibu.

“As I was sitting there with my mom watching the news, we saw our actual house go up in flames. My mom just kept shaking me, saying ‘J.D., that’s our house.’” Slajchert said.

“I tried to calm her down but it was extremely difficult for both of us. To have to watch our house on the news just go up in flames was horrific. It was one of the lowest points of my life.”

Slajchert was devastated. A house he grew up in was gone in an instant.

One of the things that kept coming to Slajchert’s mind was his friend, Ahrya, who had recently taken a trip to Jamaica. Once Ahrya arrived, he realized he had forgotten his debit card and only had about $100.

Forced to eat minimally, Ahrya was struggling until he received support from a local woman who invited him to eat with her and her family.

Once there, Ahrya asked what the woman and her family was doing at a hostel instead of their home. The woman informed him that their house had burned down and they had nowhere else to go just as she was handing Ahrya the food.

After hearing that, Ahrya could not accept, but the woman kept pleading with him to please take it. After finally agreeing, Ahrya asked just one question: Why was she so quick to help him, a stranger, when her life was in shambles?

The woman responded by simply saying that they had to share, that they wanted to give back. That story, along with Bodden, kept replaying in Slajchert’s head. Then, he finally made a decision.

After seeing his house go up in flames, Slajchert decided he was going to donate 100 percent of his book’s earnings to those affected by the Woolsey and Hill fires in a movement he titled #MoonFlowers4Malibu.

“A lot of people assume you have to have a lot of wealth or popularity to give back to others, but I don’t think that’s the case,” Slajchert said.

“I feel like even though I am only 24 and this money could help me get my life started in a lot of different ways, I would rather donate it to those who need it more than me,” he said. “My family and I will be fine, we will figure it out, but there are a lot of people who cannot say the same, so this is my way [of] sharing and my way to keep pushing this message forward.”

Since starting the campaign, Slajchert has met with many people. He says while it sometimes becomes overwhelming because there are so many people who need help, what makes the process gratifying is “how selfless some of these people are.”

Slajchert has said that many times people will meet with him not in hopes of getting help for themselves, but for their own friends that need it more than they do.

“I would say that every person I have met with has referred me to five more people that need help more than them,” he said. “To me, it just shows the strength of the community.”

“The idea of sharing with others has been the perfect distraction. Watching my house burn down was the saddest day of my life, but starting the campaign the very next day was the happiest,” Slajchert said.

A few weeks ago, Slajchert would have been happy if people purchased his book because it would be a testament to his writing. Now, he is happy because the purchase of a copy goes beyond helping him and the reader; it helps those who truly need it.

Jorge Mercado
Jorge Mercado is the current Editor in Chief and was a Sports Editor before that since freshman year. He prefers to be called Merk as that was his nickname given to him by the gods. Sometimes, his evil twin Mork appears. Clear eyes, full hearts, can't lose.
3 Comments
Inline Feedbacks
View all comments

He’s just trying to use a tragedy to peddle his book.

Uh huh. Because nothing says selfish desire for profit more than giving away all of your revenue.