Mikala Butson, a fourth-year sociology major at UC Santa Barbara, had woken up early the morning of Nov. 8 to study for a test. Her first one of the quarter, actually.

But 484 miles away, by her hometown of Magalia in Butte County, Calif., the state’s most devastating fire in history had begun to break out. 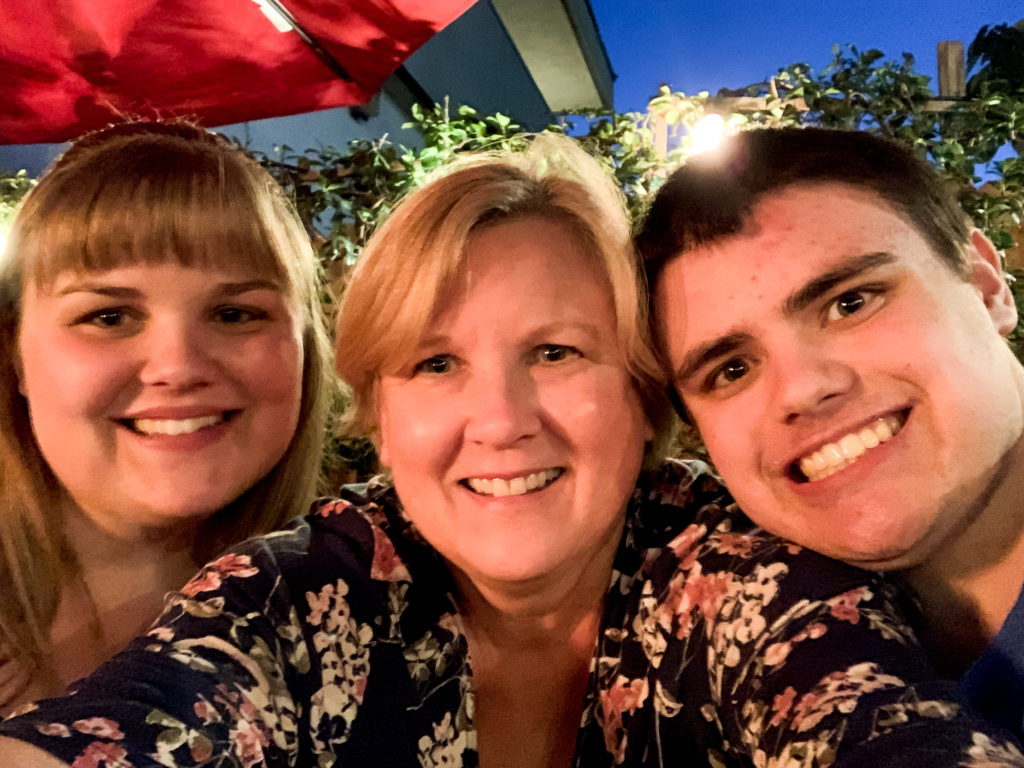 Mikala’s mother, Tamara Butson, who worked as a medical transportation provider, left her house that morning at 3:45 a.m. Between clients, she stopped at Raley’s Grocery Store to pick up breakfast for her son, who was at their home in Magalia.

“As I was stopping at Raley’s, I looked in the sky, and the whole sky behind Raley’s, which, my house is up in the hills behind Raley’s, was red,” Tamara said. “I was like ‘Oh my God, that looks like a fire!’” 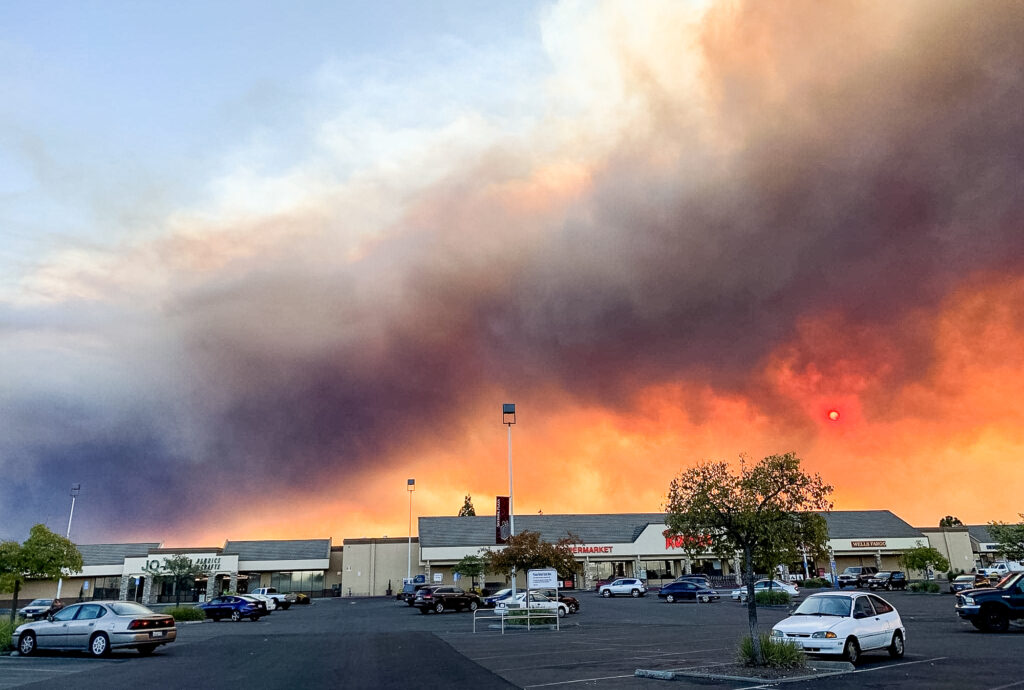 But as she checked social media, Butte County Fire and CAL FIRE, she found nothing. So she continued her drive home, driving through Paradise. That’s when she saw a man on the side of the road, putting out a fire Tamara said was creeping closer.

“As soon as I went into my driveway and pulled up, I heard an explosion,” Tamara said. Mikala speculated it was a propane tank, or possibly a transformer.

Tamara and her son, Nick, packed enough clothes to last them a week, which took “longer than it should’ve,” Tamara said.

Halfway to Paradise, Tamara’s car got turned around.

With no word from officials on what was happening, residents of Paradise and Magalia were left to their own devices.

“Everybody didn’t know what to do. There was no police, there was nobody telling us what to do, nobody received a call to say to get out. It was complete chaos,” Tamara said. “Everyone was like ‘What the hell is happening? How could they do this to us? What do we do? Are we going to burn?’”

Tamara was rerouted to the long road out of Magalia toward Chico, which took her approximately three and a half hours. 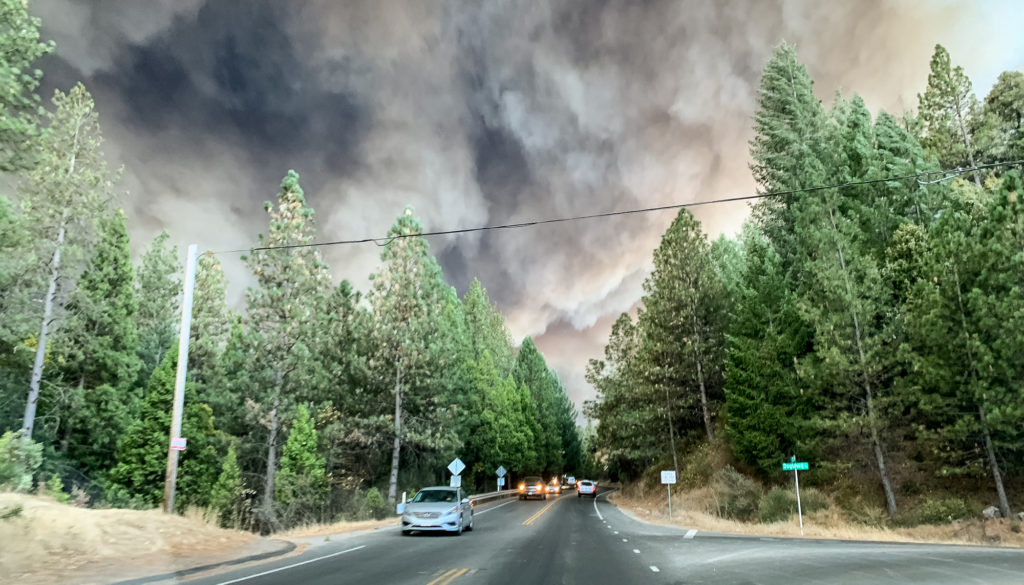 For those three and a half hours, Mikala heard nothing.

“The route that they took up through the mountains has no reception,” she said. “The last time I had gotten a text was ‘We’re evacuating, do you want me to grab you anything?’ and then I didn’t hear from them for like four hours.”

With both misinformation and a general lack of information coursing through social media during the early hours, Mikala was left to wonder if her family had been lost to the flames.

“I wish I was there to help my mom, get stuff out of the house and help her evacuate and be there for them,” she said. “But I was all the way here. I felt kind of hopeless.”

Residents driving out of Paradise and Magalia on the main road, the Skyway, found themselves trapped as the flames licked their cars, killing a number of residents.

A few years ago, Magalia altered the roads in its downtown to be more reminiscent of an old town, like Truckee, Calif., Tamara said.

But that meant converting two of the four lanes into parking — two lanes that were unavailable for residents as they attempted to evacuate.

“Everybody was kind of freaking out, going ‘How did this happen? How did we get all these billions of dollars to change this road?’” Tamara said. “‘We need the access, because if there’s a fire, where are we going to go?’”

“And so, sure enough, a fire happened and everybody was like ‘Why did they do this? It’s like they meant to kill us or something.’”

The lack of official communication, coupled with the minimal evacuation routes, meant many residents died in their homes.

“We’re on an emergency system. They’ve been preparing us for a couple years. Like, ‘If there’s an emergency, we’re gonna call everybody reverse 911,” Tamara said. “We all felt pretty comfortable, like they’re going to call us for any emergency. Nobody knew anything, and it was early in the morning, you know, people were still sleeping. And that’s how come a lot of people died in their homes and in their cars. It was horrifying. It was horrible.”

“We felt so forgotten, so alone.”

The Butsons’ house is still standing after the fire.

“Our house is pretty smoke damaged inside,” Tamara said. “We have soil outside that’s toxic, and the insurance is going to give us no money. They’re only going to bring in cleaners and have them clean.”

If Tamara feels that the cleaning job is not satisfactory and there are still leftover toxins, she then has to pay for tests to measure the toxicity, which cost anywhere between $1,000 and $5,000, according to Tamara.

“I can’t go back to my house; there’s no way I can live in toxicity,” Tamara said. “My house should’ve burned down because if it would’ve burned down, I at least could’ve had money to then take it and then pay off the bank and then start again.”

Tamara, Mikala and Nick moved to Paradise when Mikala was three years old, and eventually moved to Magalia, the neighboring town.

“It’s difficult to say I enjoyed growing up there,” Mikala said. “My mom had only just been able to get a job that was higher-paying. None of the people around me had a lot.”

Butte County is one of the poorest counties in California, Tamara added.

“When he was giving his speech, [Trump] couldn’t even remember the name of Paradise. He called it ‘Pleasure,’” Mikala said. “His response has not been supportive.”

Mikala spoke about the political attitudes of Butte County and Paradise more specifically. Although the area is mostly conservative, many Trump supporters questioned Trump’s response to the Camp Fire, according to Mikala.

However, she doesn’t believe political opinions have substantially changed after the fire.

“It’s very red, and, basically, the opinions reflect that.”

There is one common sentiment on the ground: Pacific Gas & Electric (PG&E) is to blame, Mikala said.

Months ago, Mikala and her family got a notice in the mail from PG&E which indicated that when there is high fire danger, PG&E would shut off the power.

A couple of days before the fire, PG&E reported that there would be high winds and therefore the power would be shut off, Mikala said.

“They had never shut off the power, even though they told us they were going to,” she said. Then, the fire happened.

“There are already people who are starting the lawsuits against them and like getting legal teams together,” Mikala added. “I’ve seen hundreds of people talk about it online. If they find out that’s what caused it, it’s going to be a huge thing.”

The Los Angeles Times reported that people who lost homes in the Camp Fire have, in fact, already begun suing PG&E.

According to the lawsuit, PG&E “did not maintain its infrastructure and failed to properly inspect and manage its power transmission lines,” the Los Angeles Times reported.

In the days since Tamara and Nick left Magalia, they traveled to Santa Barbara to stay with Mikala in her one-bedroom apartment, which is “paid for entirely by financial aid and loans from the school,” Mikala wrote on the family’s GoFundMe page.

After staying with Mikala for about a week and a half, the two found an apartment in Solvang, which they were able to furnish with two beds and a few household items with money from the GoFundMe.

Mikala signed them up for Adopt a Family, a Facebook group to connect those affected by the Camp Fire and those who want to help. The person who has ‘adopted’ Tamara’s family has been sending them items every day from their Amazon Wish List, including a coloring book to help Tamara de-stress.

But what comes next?

“You know, I’m freaking out right now. I loved my job. I finally had a job that I was doing so well financially, and I had it planned out. I was paying off things, I was going to save. I had enough for taxes. I was feeling good about it,” she said.

For now, Tamara sees herself putting down roots in Solvang, close to her daughter.

“It’s been a really hard time having my family apart,” she said.

Mikala, who will be graduating this spring, is looking to get a full-time position at the UCSB Library, where she currently works part-time.

“I’d like to go to graduate school, but I was going to take the year off. But now, maybe I should just go on for financial purposes instead of taking the year,” she said.

The family doesn’t see a future for them in their hometown.

“I don’t think [Paradise and Magalia] are going to rebuild, and if [they do], it’s going to be many, many, many years because it’s just so devastated,” Mikala said.

Tamara and her son will be in Solvang for at least the next year.

“[Nick] was here awhile back and loved Solvang, and he told me many many months ago that if there’s anywhere he wanted to live, it would be Solvang,” she said. “So, I said, ‘That’s where we’re going to live,’ and here we are.”