The Daily Nexus
On the Menu
Intermittent Fasting: A Realistic Experience
November 14, 2018 at 12:00 am by Paige Holloway

I have never been one to follow trendy diets that force you to constantly monitor what you’re eating. It’s just not realistic for me to fool myself into thinking I can follow a strict eating regime. Of course, I still try to focus on my health, and I’m always open to trying new healthy habits. When I first heard about intermittent fasting as a popular eating fad, fitness gurus and health advocates everywhere were swearing by it. The thing that caught my eye was everyone emphasizing that intermittent fasting is actually not a diet but, rather, a specific eating pattern with significant health benefits. As if this wasn’t enough of a winning case to try it out, I also learned that you actually don’t have to change what you’re eating at all, just when you’re eating. Sold! 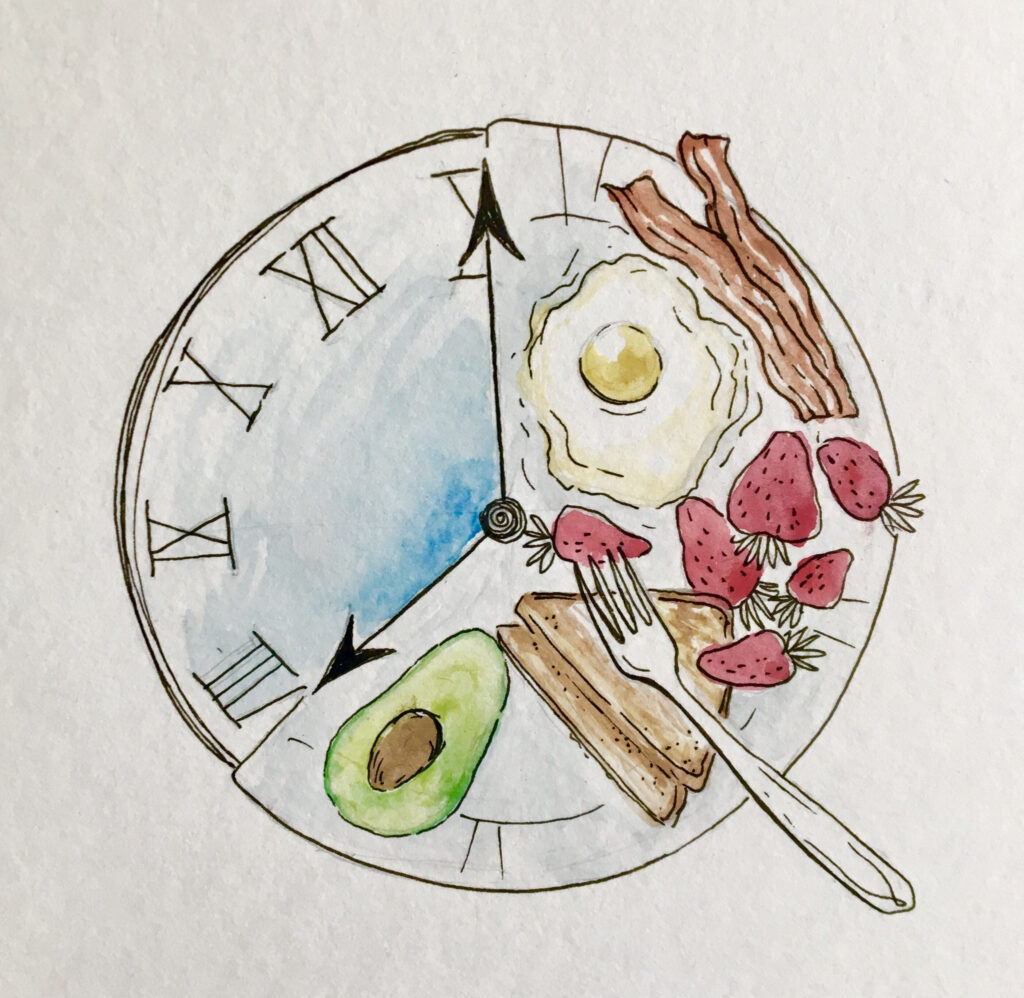 I quickly began researching what intermittent fasting exactly was, considering the thought of fasting in general freaked me out a little. In broad terms, intermittent fasting is simply the practice of eating within a given time window and fasting for the remainder of the time. There are actually multiple methods of achieving the benefits of intermittent fasting. The 5:2 method involves eating normally five days a week and fasting to significantly decrease calorie intake to 500-600 for two days of the week. There’s also alternate-day fasting, which means alternating between normal eating and fasting every other day. Some of the crazier ones I’ve read about are the warrior diet, which involves fasting all day and eating one large meal at night, and the eat-stop-eat method, which involves an entire 24-hour fast once or twice a week! Each of these methods just seemed too intense for me and my active lifestyle. A more fitting method for me was the 16/8 method, which is actually the most popular technique most people associate with the trend. Basically, you choose an eight-hour eating period during the day based on your own personal lifestyle and simply fast for the other 16 hours. While this may sound intimidating, it’s important to consider that most of your 16-hour fasting window is spent asleep.

There are many promising health benefits of intermittent fasting. Perhaps the most popular is fat loss without losing muscle mass. When you shorten your period of eating during the day, your body enters a caloric deficit, which is crucial to weight loss. The best part is that it doesn’t even feel like you are restricting calories, because you can still eat whatever you want. Eating just two large meals during the day can keep you feeling satiated while also reducing your insulin levels and curbing cravings once your body adjusts to its new eating schedule. Other great benefits of intermittent fasting are that it reduces the risk of diabetes, aids in digestion, improves heart health and boosts energy levels.

I personally decided to take the dive and try it out this summer when my schedule was fairly open and I could plan out my meals. I set my eating time frame as 12 p.m. to 8 p.m., allowing for a late brunch/early lunch and a dinner with some snacks in between. Personally, this worked best for me because I have never been someone who needs food as soon as I wake up, and I can live with skipping breakfast. As part of my new routine, I made sure to get all my workouts done in the morning before my first meal so I could remain in a fasted state, which has also been proven to help you reach your athletic goals faster. Now, if you’re a coffee addict like me, it may seem daunting to not be able to drink your usual cup of coffee with cream outside of your eating window. This can be especially difficult if you are an early riser or like to get a workout done early in the morning and need that extra boost but are still in a fasted state. If you happen to be one of the few brave souls that enjoy black coffee, then you’re set! This does not count as breaking your fast since coffee itself has zero calories. But if you absolutely can’t bear the thought of drinking straight black coffee in the morning, you will be happy to know that many nutritionists believe that adding just a splash of a milk of your choice (personally, I prefer almond) into your coffee still keeps you in the fasted state since it’s relatively low in calories. It’s the Starbucks lattes, mochas, frappuccinos and other calorie-dense drinks that ultimately break your fast. Good news is, if you do prefer these fancy beverages, you can just start your eating window earlier in the morning and finish in the late afternoon! Some people can’t bear the thought of skipping breakfast in the morning, so they can simply start and end their eating period earlier. It’s all a matter of personal choice.

As an athlete, I chose to test out intermittent fasting purely for the feeling it would bring me and less so for a weight loss goal. In the beginning, I had to slightly fight off a growling stomach in the mornings, but my body automatically adjusted after about three days in. My morning routine also became much shorter (conveniently). While I was fasting, I always reminded myself to drink lots of water in order to still feel energized, and surprisingly, I drank more water this summer than I normally do. Perhaps the most pleasantly surprising part of this experience was that my workouts were more efficient than ever, and I felt less weighed down and fatigued than normal. I was initially worried about becoming light-headed going into my usual intense workouts on an empty stomach, so I began by taking it easy before easing back into my normal routine. Once I was comfortable enough to fully push myself again, I found that I had even greater post-workout endorphins, and I was excited to refuel my body with a meal afterwards.

While most people take on intermittent fasting as a lifestyle choice, I knew it would be difficult for me to continue such a routine way of eating as a full-time student with a busy school schedule. I still recommend trying out intermittent fasting to anyone who cares about their health but can’t keep up with diets like me. I definitely see how intermittent fasting can be a sustainable lifestyle choice because of the ability to customize it to your own scheduling/eating needs. My experience was nothing but positive, and I plan on taking it up again when my schedule is more consistent, as it genuinely made me feel good and productive.

so much wrong with this article. stop conflating caloric deficit with restricted feeding period. why write about something you know nothing about and weren’t even willing to really try?

After researching and have had own personal experience with this, it works. Stop being lazy and quit putting out negative feelings.

I love Intermittent Fasting! It’s so hard these days to decipher what is a fad and what is worth your while and your health. I use these smoothie pouches that you can use during your 5:2 fasting days and they are great – it makes fasting so much easier. Thank you for sharing!