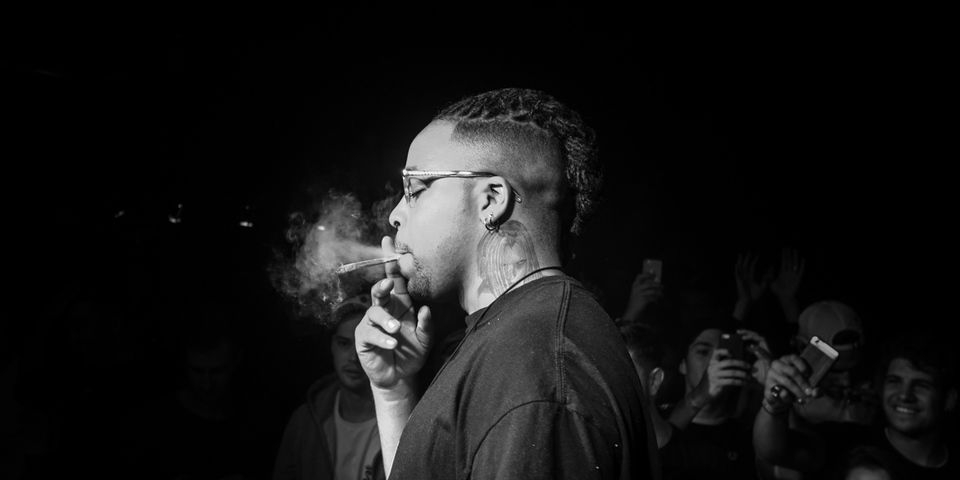 Tonight marks the third time I went to see Azizi Gibson live. The first of which, someone who isn’t me took an edible and got unrealistically high in Orange County. The second time, I saw a glimpse of Gibson from afar at FYF in Los Angeles. Both of my initial attempts to see Azizi were somewhat in vain. Thus, I was slightly reluctant to see him for round three.

I had no expectations going into Velvet Jones, but grew pleasantly surprised as the night unfolded. The staff was extremely accommodating to me and my friends and I definitely felt welcomed at the venue. I heard that Velvet Jones was grimy and intimate, but I had no idea I would be able to walk right in 30 minutes after the opening acts started and find myself at the front of the venue.

About 30 minutes after the doors opened, the first opener, Brayell, came on stage. He’s a smaller artist based in Isla Vista who spat exceptionally meaningful bars. I appreciated his vulnerable stage presence and profound lyricism.

The next opener, DJ Ill Chris, heavily contrasted Brayell’s sobering charisma. He came on stage with a bold energy and got the crowd jumping on their feet. During his act, I somehow was summoned onto the stage. I jumped around for a minute or two with Ill Chris and even got my friends to come on for a hot sec. While dancing on stage with an artist I didn’t know was slightly intimidating, the gesture was all in good fun and definitely hyped my friends and the crowd up more.

Shortly after Ill Chris left the stage, opener Jez Dior came on and sang heartfelt yet seductive songs for a firm half hour. His sound is exciting and catchy, making it easy for a fan who had never heard his music to enjoy his live experience and sing along.

After dancing through opening acts for over an hour and a half, the crowd was excited for Azizi to grace the stage. I was lucky to be surrounded by friendly girls in the crowd which made waiting all the more diverting — the last time I saw Azizi at the Observatory the crowd was aggressive and violent.

Azizi came on abruptly and began rapping without introduction. He played a fan favorite, “Toast,” as his second song; he didn’t provide much buildup to the more energetic aspects of his performance.

Though his set only ran for 45 minutes, he was able to incorporate aspects of his personality throughout the show. Compared to his performance two years ago, I noticed that his self-expression was rather mute, though that distinction could easily be attributed to the size of the venue. Azizi is definitely a positive person who purports a general sense of optimism and kindness. His overall message to his fans rang along the lines of inclusivity. His song “Levels” is a good introduction to the all-inclusive and uplifting features of his music.

He told the crowd that if we wanted to get to know anything about his personality, we should listen to his song “Xenophile,” the titular track from his newly-released album. I expected “Xenophile” to hint toward inclusivity, but it’s actually a rather depressing song. He sings, “I’m looking at my lifespan, I’m drowning can’t deal with your shit / I don’t got no time man, no time man, to deal with a bitch / Yeah I’m dealing with life man, yeah I’m dealing with life man.”

Though his set was brief, his performance was packed with energy and enthusiasm. The venue itself is probably what contributed to the overall enjoyment of the concert. The staff at Velvet Jones was much friendlier than other concert venues that I’ve been to. The venue is so intimate that it’s easy to be extremely close to the performer. The excitement of the opening acts would not have been as intense if it weren’t for how easy it was to get close to the artists.

Azizi ended with an extremely energetic rendition of “Smoking With the Gods,” sung much more rambunctiously than the recorded version. Azizi undeniably knows how to get a crowd riled up and engaged in nothing but the music.