Noted activist and founder of the #MeToo movement Tarana Burke spoke at Campbell Hall on Monday evening, Nov. 5, to a full crowd of UC Santa Barbara students and community members, an event put on by UCSB Arts & Lectures Series. 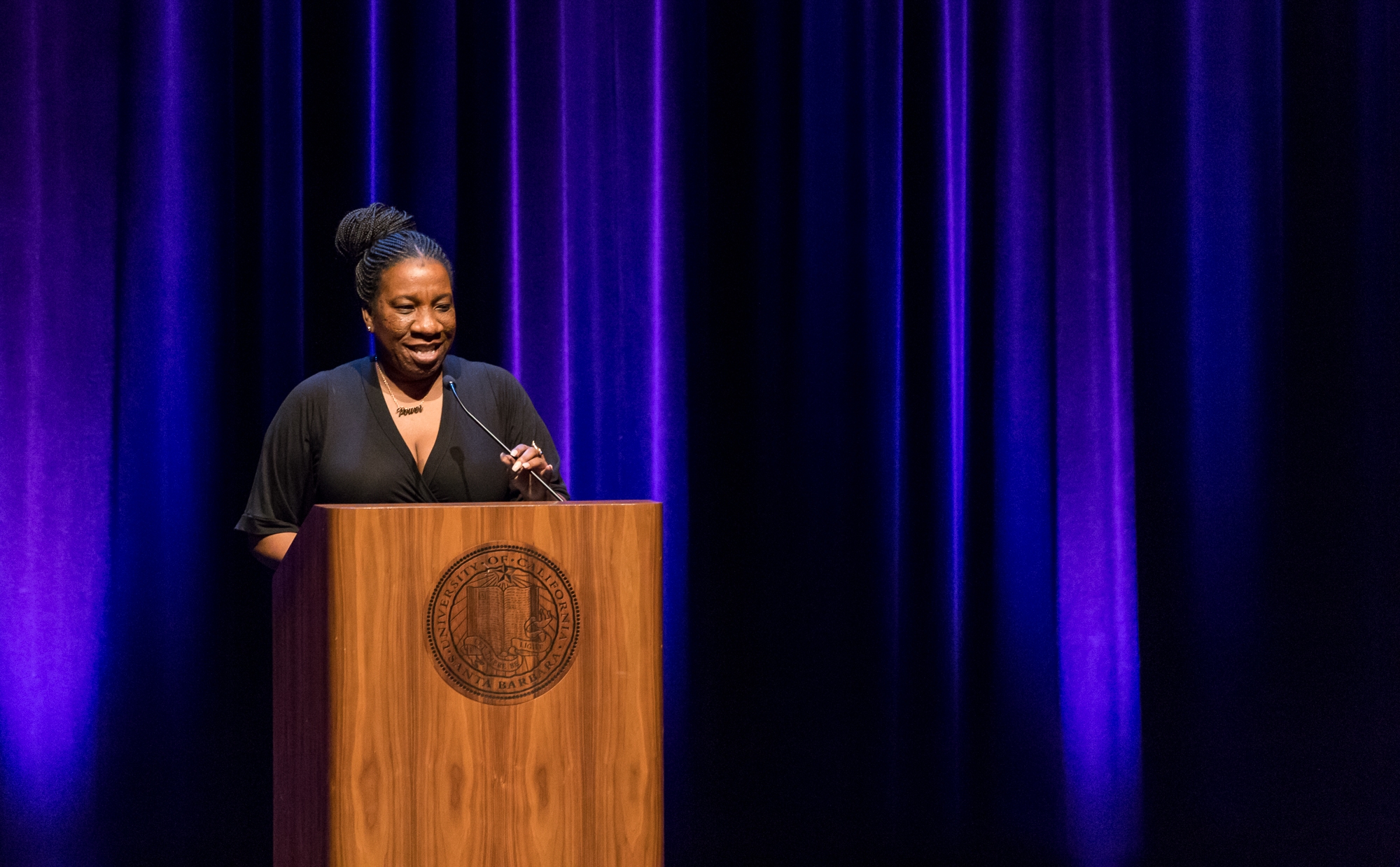 Burke, founder of the Me Too movement, spoke at UCSB on Tuesday. Jenny Luo / Daily Nexus

Burke’s lecture focused on the background of the #MeToo movement, dating back to her youth and its official founding in 2006. She also spoke of where the movement stands now, a year after #MeToo gained viral attention.

Burke weaved together anecdotes of her activism in a lecture that was surprisingly humorous, given the heavy nature of the topic of sexual assault.

What was unsurprising was the humanity and personal touch, as seen in both her lecture and at a reception held immediately before. The reception, held in the Mosher Alumni House, welcomed a group of 40 to speak to Burke before her Campbell Hall Lecture.

Students were selected to attend the reception through the Black Studies and Feminist Studies Departments, which co-hosted the event.

Burke went from table to table during the Mosher House reception, asking about students’ majors.

She also reflected to the group on what the #MeToo movement still has to accomplish.

“It just pains me that survivors have been forgotten. We have built this movement on the stories of survivors…for what?”

Burke’s lecture focused not only on her own work in activism, but how the #MeToo movement has changed since its viral re-emergence in 2016. The Kavanaugh hearings in September were a reminder to Burke of how much work remains in the national conversation around sexual assault.

“I thought that we were further along than we were… [the Kavanaugh hearings were] a missed opportunity to examine what accountability looks like,” Burke said.

Burke said the hearings became too partisan, and that led to people forgetting the greater message regarding Kavanaugh’s behavior.

“There’s a straight line in my mind between a 17-year-old Kavanaugh… who was not told ‘no’ very often, and the 57-year-old man who has an unchecked amount of power and can make choices about my body,” she said.

In her lecture, Burke spoke candidly about the difference between the media’s perceptions of the #MeToo movement and the work which the organization is accomplishing, which she described as #MeToo “writ large and writ little.”

Those who see the #MeToo movement as just a hashtag are only seeing the “writ large,” according to Burke.

Over 12 million people posted #MeToo on Facebook just 24 hours after its use by actress Alyssa Milano on Oct.15, 2017, but Burke reminded the audience that “every single hashtag is a human being.” 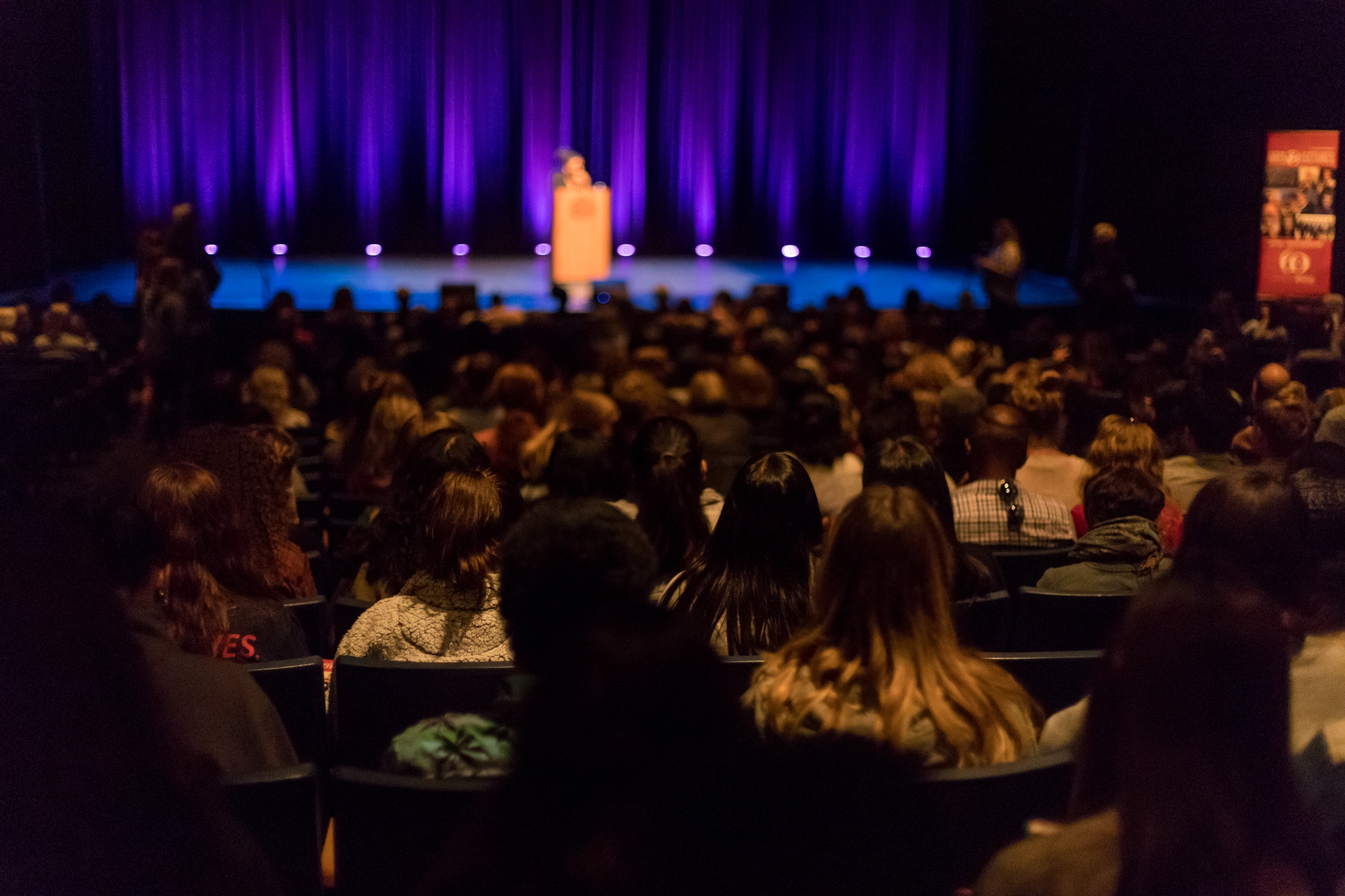 Burke does not view the #MeToo movement as sustainable if it remains tied only to social media.

“What they have done is not sustainable, not a movement, but a reaction to a moment. […] it’s a distraction from our real work,” she said.

Sustainability comes from #MeToo “writ little,” which includes everything behind the hashtag.

“Me Too is a global community of survivors committed to healing and action, including marginalized survivors of all identities, including queer and trans. The rest is a distraction from that,” Burke said.

“Do recognize the urgency of this movement. Think of those waiting to be seen, to be heard, to be believed.”

Burke plans soon to expand #MeToo mission beyond the hashtag. New work including survivor leadership training will be unveiled in January 2019, while a new website will be completed in April.

“[The website will be] the most comprehensive website for survivors of sexual violence,” Burke said, to the eruption of applause from the audience.

While #MeToo is about the stories of individuals, Burke emphasized in her lecture that the movement emphasizes community healing, changing the culture of sexual violence through law and policy changes.

This change in culture can happen at the college level, Burke said.

She personalized her message on Monday to UCSB in particular by reading UCSB’s mission statement aloud, describing the commitment to sustainability as brilliant.

Burke also challenged the administration to examine how UCSB’s policies regarding sexual assault can fit this mission. The power in the mission statement, according to Burke, is having a “clear guide to create policies and shift culture.”

“Students, this is built around you. Not the founders, not the board of trustees. You have the power now.”

Was Ms. Burke not the founder of the Me Too movement (not the #metoo movement which was popularized by Asia Argento?). I feel the distinction is pretty important.