The Daily Nexus
Opinion
Why the Plastic Straw Ban Kind of Sucks
November 8, 2018 at 10:18 am by Alysha Agarwal

On Oct. 8, the Intergovernmental Panel on Climate Change announced that Earth is heading toward the 1.5° C temperature-increase threshold much faster than scientists originally thought. Basically, the world has until 2030 to get its shit together; otherwise, major earthquakes, Category 5 storms and volcanic explosions will begin to destroy our beautiful planet. Um … hello?! Why is no one talking about the fact that the world is pretty much ending?!

Since the 19th century, Earth’s average temperature has already risen by 1° C; from the death of over two-thirds of the Great Barrier Reef to the several Category 4 and 5 storms on the East Coast, we have already begun to see the catastrophic results of our warming planet. Scientists have concluded that we have to keep our average temperature increase under 1.5° C if we want to save our planet from extreme natural disasters. If we get to this point, melting land ice could cause the sea levels to rise by over four feet, meaning areas close to the water, like Santa Barbara, could be flooded and eventually completely underwater.

A recent movement to combat climate change has been the turn away from single-use plastic. On Oct. 9, the Santa Barbara City Council voted to officially ban all plastic straws, cutlery and stirrers in the entire county. This vote came in addendum to Assembly Bill No. 1884, a state bill that requires all restaurants to give plastic straws only upon request from the customer, which was approved by California Governor Jerry Brown in late September.

It is estimated that the combined total of every straw that has ended up in the ocean accounts for only approximately 0.3 percent of all plastic pollution. Plastic pollution unquestionably has an effect on our ocean’s health — but not as big of an effect as greenhouse gas emissions. Over the past several years, specifically since the Industrial Revolution, the emissions of greenhouse gases have skyrocketed. So why are we so focused on plastic straws when there’s clearly a much bigger problem right in front of our faces? 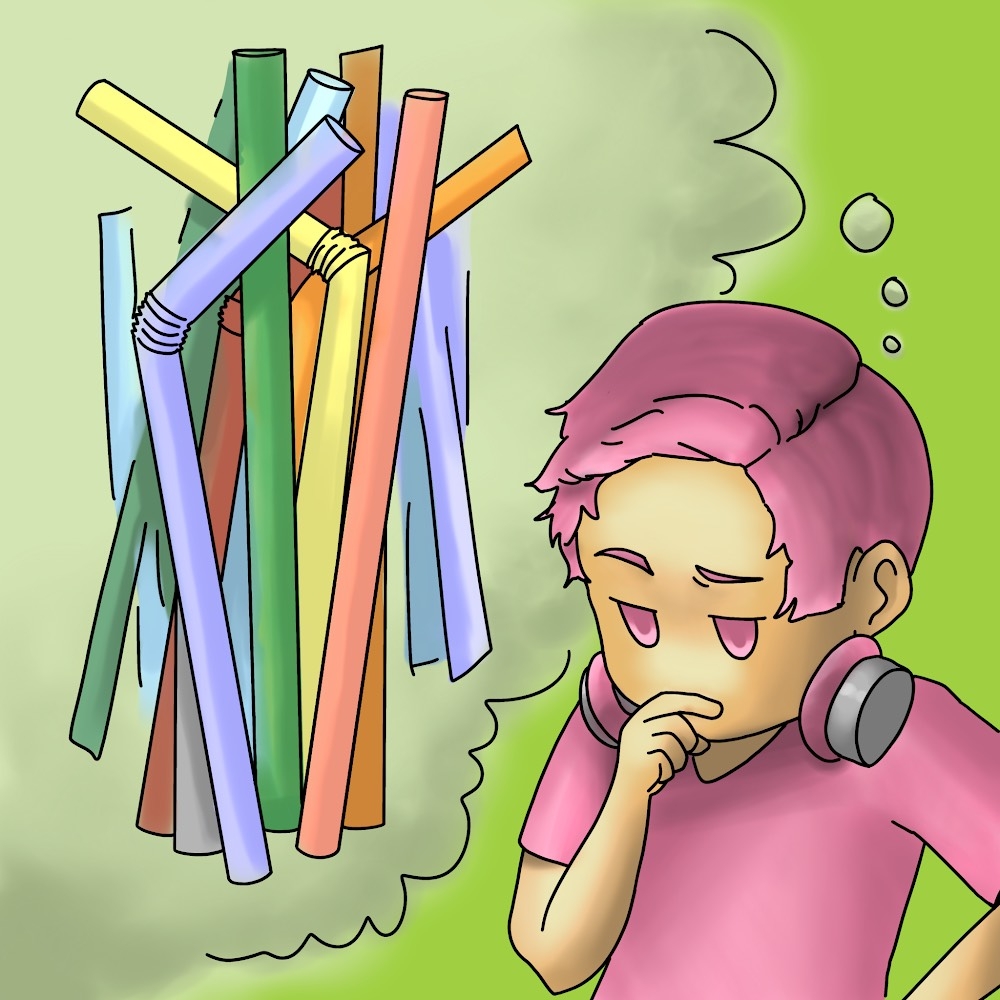 The government and large corporations have brainwashed us into thinking that this huge global catastrophe is because individuals occasionally use a plastic straw to drink their coffee or a plastic bag to bring home their groceries, turning the blame away from themselves and onto us. The director of the United States Environmental Protection Agency (EPA), Scott Pruitt, has publicly stated that he doesn’t believe there is any correlation between carbon dioxide and climate change. He has, in fact, rolled back on policies that regulate carbon dioxide emissions, making it easier for big corporations to release as much toxic waste into the air without any repercussions, stating that the regulations circa the Obama administration were too “restrictive.” Making already wealthy companies wealthier is so obviously more important than saving our dying planet, right?

So, as a society, we need to take a step back and look at the bigger picture here. If the person in charge of the most powerful agency for protecting our environment won’t fight this battle for us, we’ve got to do it ourselves. But before we can turn to outside forces, we need to find a change within ourselves. Nothing can be done in our fight against the government and large corporations if we don’t enact change in our everyday lives.

I am in no way discrediting the plastic straw ban — it is definitely a step in the right direction, but it is a minuscule step in what needs to have already happened at this point. It is a step that is getting far too much attention and credit considering how deep we are in this whole climate change situation. If you open any form of social media, environmentalists of every shape and form are boasting about their new straw-free life instead of pushing for further movement in this direction. If we spend too long stuck in this same spot, we won’t get anywhere; we need to have a faster turnaround in movements instead of fixating on this small victory.

Why are we so focused on plastic straws when there’s clearly a much bigger problem right in front of our faces?

The reason the plastic straw ban is so bizarre to me is that people will stop using straws to save the fish, yet they won’t stop eating fish to save the fish. Twisted logic, right? Instead of blaming people for picking up a straw at their coffee shop, let’s educate people on the impact that the decisions they make three times a day can have on the environment. Animal agriculture is responsible for the emission of more greenhouse gases than all of the world’s transport systems combined, so let’s use this momentum and continue the fight to bigger and better steps rather than staying fixated on this smaller one.

There are so many other ways to reduce our carbon footprint besides cutting back on plastic straws. It’s very obvious that change is needed at a larger scale, but you have to start small to go big; it’s easy to get people to want change, but it’s much harder to get people to change.

Once our society can make the shift toward a more sustainable lifestyle, we can start demanding change from the bigger players in this disaster. Change won’t happen unless we educate one another and change from within. We’ve become too fixated on this small movement away from plastic straws; instead of being stuck in this place, let’s use this traction to continue this fight that our planet so desperately needs and deserves.

Alysha Agarwal wants people to be aware that their environmental impact goes far beyond plastic straws.

All these feel good policies do little good. The real problem is over-population. Until the government stops subsidizing people for having more kids, nothing will change. Check the Santa Barbara county health department records and see who is having the most kids. Oops, I guess that is racist??

The US population is actually on the verge of declining, the fertility rate for american citizens is far below the necessary level of 2.1 to sustain population. The only reason our population isn’t declining yet is because of immigration, and immigrants tend to have more kids. Other countries like india, china and in africa do have a population problem.

You need to re-examine the source of your figures. Yes, other countries are worse, but there are still groups within the US who greatly exceed the 2.1. When the children of these groups come of childbearing age, the numbers will accelerate.

Lovely to see that UCSB’s resident eugenicist has logged on.

I denounce any criticisms of demographic issues as racist. Look at me!

Headlining this story as “plastic straw ban kind of sucks” seems misleading and clickbaity when Agarwal admits that the ban is a step in the right direction, however minuscule.