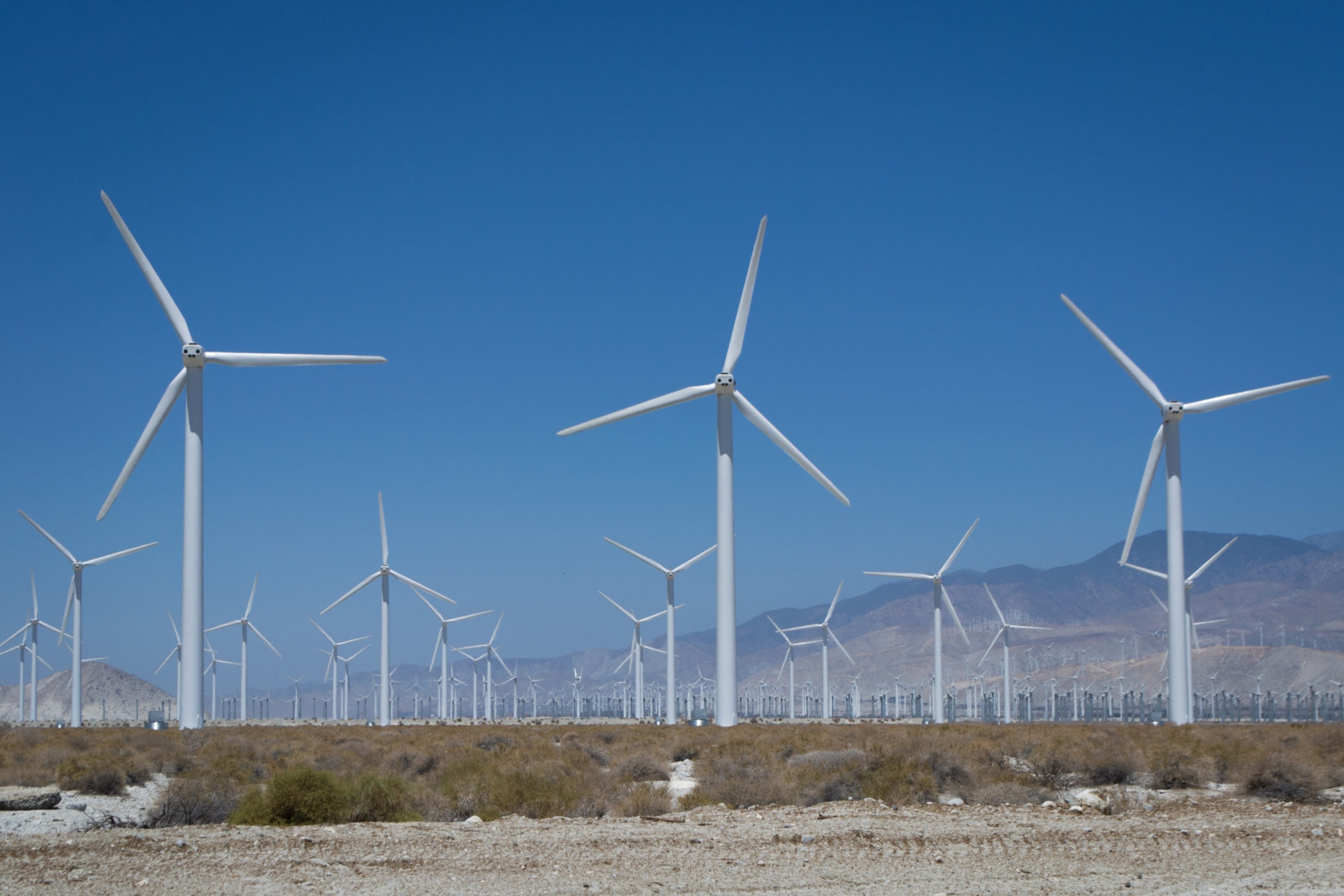 Luzzatto-Fegiz and Caulfield’s theoretical model portrays the turbines on a wind farm to control the greatest amount of air possible in order to determine the maximal performance, or upper limit, for a wind turbine on a wind farm. Based on their model, they found that the performance could improve by ten-fold compared to the productivity of existing wind farms. / Courtesy of Wikimedia Commons

As pressure mounts to find and use cleaner sources of energy, harnessing wind power has become increasingly common. But while wind turbines may be a large prospective source for generating electricity, these immense devices aren’t living up to their full potential.

That is, at least, according to the research conducted by Paolo Luzzatto-Fegiz, a mechanical engineering assistant professor at UC Santa Barbara, and Colm-cille Caulfield of the University of Cambridge.

While the performance limits for a single wind turbine have been established, the same couldn’t be said of the power output from a large wind farm before their research. And with large groups of wind turbines being utilized by the hundreds or thousands, understanding how the collective qualities of the group affect wind farm performance becomes more crucial.

“We are interested in trying to develop ultimately better wind farms, and part of that is to understand what would make for a better wind farm and how do we even define that. Right now, we optimize wind turbines so that they are really good in isolation, but that’s not how we use them,” Luzzatto-Fegiz, lead author on the paper, said.

As air approaches a rotating turbine, the spinning motion creates turbulence and slows down the air, depleting the air flow around it for neighboring turbines. This creates pockets of air on a big wind farm, in which only the turbines situated in the direct path of the wind can maximally benefit from the high-wind velocity for higher energy production.

“In that kind of situation, you have this wind shadow. Behind a wind turbine, the wind has been weakened because a lot of that energy has been extracted by that turbine. And so for the following turbines, that’s a problem. Usually it diminishes how much power they can extract. So this suggests that you don’t want to optimize the turbines by themselves; you want to optimize some property of the group,” Luzzatto-Fegiz said. 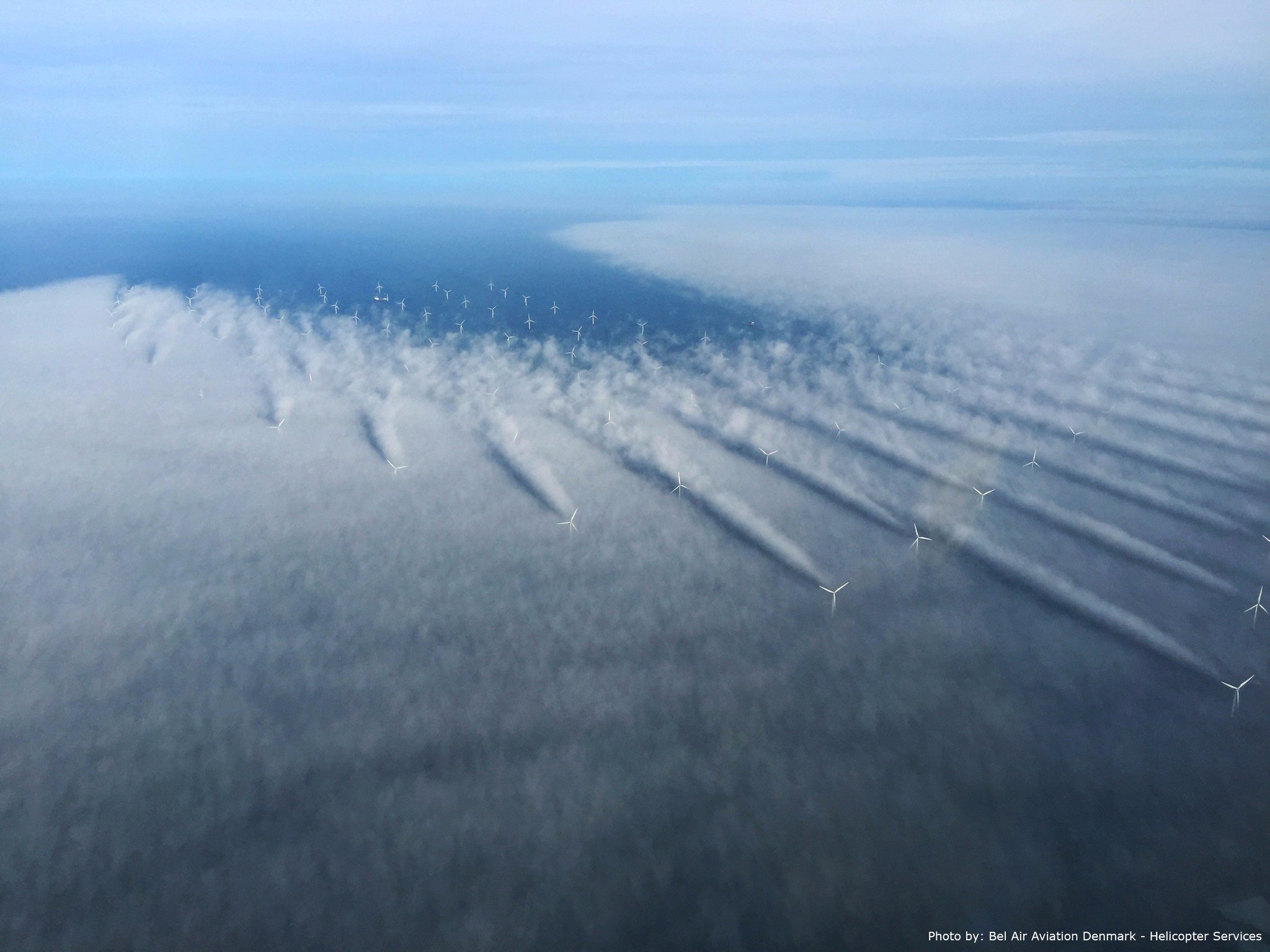 The wind shadow effect can be seen in foggy conditions at an offshore wind farm. The wakes of lower-speed air created behind the first line of wind turbines lower the possible wind power production of a turbine and reduce optimization of wind farm performance. / Courtesy of Energy Journal

Luzzatto-Fegiz and Caulfield have come up with an equation to calculate the optimal power density — that is, how much power is extracted per unit of land — for a large wind farm.

The researchers’ theoretical model isn’t concerned with the look of the turbines or their spatial layout as much as it is focused on their possible productivity. The model displays how energy travels from higher up in the atmosphere down to an array of generic machines that take out energy. The researchers designed the devices to control the turbulence next to themselves so that they produce greater churning of the air.

The mathematical model accounts for properties of the individual turbine — for example, how the angle of the blades can affect the flow of the air — as well the properties of the turbulence behind other wind turbines, such as the amount of mixing of the air, which relates to the physics of the flow.

It provides an upper bound, or the maximal performance, for a wind turbine, determining the amount of room for improvement relative to the productivity of existing wind farms.

“You can ask, if I make a machine that does the best possible level of churning or mixing right next to the wind farm, how much could you improve things? And the surprising thing is that the [potential] improvement is a factor of 10,” Luzzatto-Fegiz said.

When solar radiation heats the ground during the day, it heats the surrounding layer of air, causing the warmed air to rise. This creates extra turbulence. At night, the opposite events occur. The ground can cool down quickly, causing an inversion, or a layer of cold air near the ground. That diminishes the mixing of air and subsequently makes it more difficult to extract power from a wind farm.

“The main idea is that we should think about the turbulence each wind turbine makes behind itself,” Luzzatto-Fegiz said. “You might have multiple turbines designed in a complementary way to make turbulence together. You might take into account this effect of local weather, or what we call atmospheric stability, which is bottom heating or cooling.”

The ultimate goal is to have the slow-moving air behind each turbine mixed with the faster moving air above the turbines as quickly as possible to allow subsequent turbines to harness the maximal amount of kinetic energy. Currently, wind turbines aren’t designed to have this effect.

“We’re looking at ways to modify existing turbines to improve our output by following assumptions and essentially having ways to enhance the turbulence each turbine makes. There is the upper bound, which we think is the most exciting thing from a scientific standpoint. It’s more about a goal for engineers, for long-term research,” Luzzato-Fegiz said. “It doesn’t mean you can get there. But it suggests that there is room for growth.”