The Daily Nexus
Sports
Lynsee Voss Strikes With Two Late-Goals to Secure the Win
October 28, 2018 at 5:05 am by Sports Editor 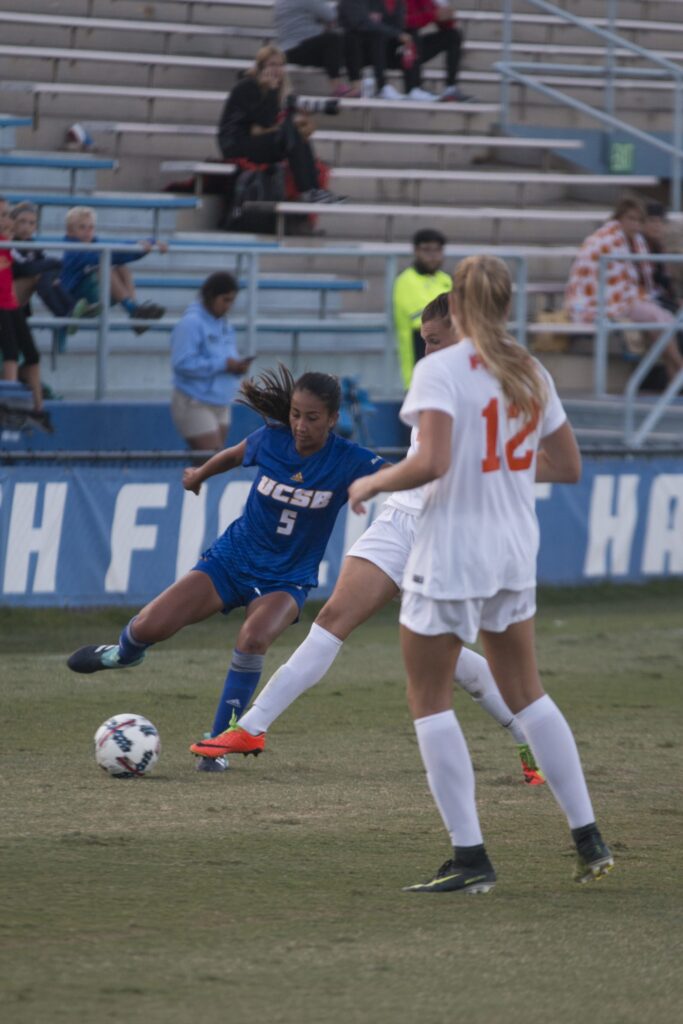 The UCSB women’s soccer team triumphed in a dramatic late win on Thursday evening, as junior midfielder Lynsee Voss rifled in two goals in the 63rd and 71st minutes to vault Santa Barbara over Cal State Northridge with a 2-1 victory.

“It’s a massive relief to know that we’re in the Big West Tournament,” gleamed Coach Paul Stumpf while letting out a sigh of relief. “If we win on Sunday, we win the title outright; you can hear them in the locker room, they’re obviously celebrating, but it’s not done yet. They’ll recover their bodies, get their minds right, and hopefully put on another big performance on Sunday.”

The Gauchos (12-6, 5-2 Big West) leapt into a first-place tie with UC Irvine as each team has garnered a hearty 15 points this season. The Matadors (6-8-1, 2-5 Big West) remained in the eighth spot following the tough loss to a streaking Santa Barbara squad.

Both teams clamped down on the defensive end in the first half of play as there were only a combined three shots fired off before the break. Freshman keeper Amanda Delgado leapt to make two crucial saves in the 17th and 19th minutes which kept score knotted up at zero a piece.

In the 51st minute, the Matadors’ fed a streaking Alexis White who entered the box and took a chance at goal as she fired toward the near post across her body. Gaucho junior Hannah DeWeese laid out to make a diving save, but White finessed a quick touch to CSUN forward Bethany Fitzsimmons who weaseled past a shot to take a 1-0 lead.

White had another chance at goal a mere 3 minutes later, but DeWeese once again made a critical stop to keep the game tight. The Gauchos maintained control over the next 10 minutes and managed to get solid shots at goal but couldn’t convert.

In minute 63, freshman forward Jessica Wright sent a cross into the box that was deflected by a CSUN defender and directed to Lynsee Voss. Voss powered a screamer past a diving Delgado as UCSB tied up the match at 1-1.

“Technically speaking on a surface like this, that’s difficult,” emphasized Stumpf in his twentieth season. “It was a half-volley which is very difficult to keep low; a surface like this, it speeds up and it’s slick. She tucked it nicely away in the corner to even it up so that we could get after them for the next one.”

Just minutes later, Big West assist leader senior Mallory Hromatko delivered a switch to Voss who found space and crept a go-ahead goal past the misplaced Delgado to take a 2-1 lead in the 71st minute. This marked the midfielder’s third goal of the season and second game winner this year.

Late game heroics have been a common occurrence for the Gauchos this season as 20 out of 30 (67%) total goals this year have come in the second half of games. In each of the Gaucho’s most recent three wins, the team has come alive in the second half to score a game-winning goal in the 70th minute or later.

UCSB has a chance to clinch the first-place spot on Sunday evening with a victory over seventh place Cal Poly (2-12-4, 2-4-1 Big West). Irvine played its final game of the season on Thursday and is in danger of falling into the third spot with wins from Santa Barbara and Long Beach State over the weekend.

The Gauchos play their season finale on the road Sunday against the Cal Poly Mustangs for another chapter of the Blue-Green Rivalry.