The Daily Nexus
Science & Tech
English in the Field: Conducting Interdisciplinary Research
October 25, 2018 at 8:30 am by Sunidhi Sridhar 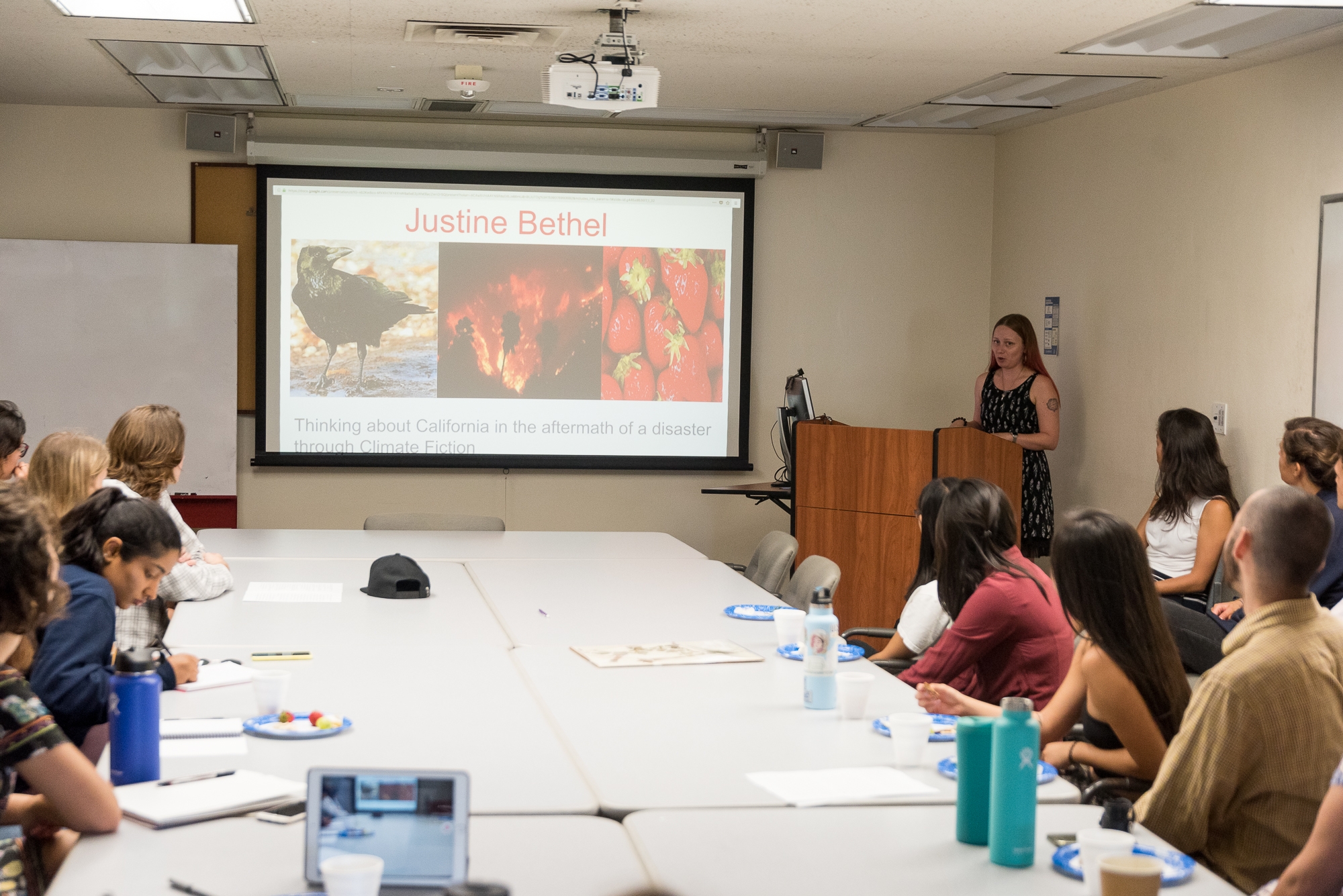 Justine Bethel, an English major, presents the interdisciplinary work she had been working on this past summer as part of a collaborative project between CCBER and the Department of English. Her “cli-fi” (climate fiction) project focuses on thinking about California in the aftermath of an ecological disaster. Daniel Kong / Daily Nexus

Field research is often associated with scientific disciplines, but for several weeks this past summer, six English majors drew inspiration from the natural environment for their writing. In collaboration with the Cheadle Center for Biodiversity and Ecological Restoration (CCBER), these interns developed a creative writing or research project that included an element of ecology, whether that be specimen preservation or global climate change.

Dr. Melody Jue, an assistant professor of English at UCSB, described these projects as “a joy to supervise, because this kind of internship self-selects for very motivated and driven students who are just really passionate to follow their own curiosity.”

Over the course of six weeks, the interns were required to devote 60 hours to their own writing and, at CCBER, to keep a journal and meet with their graduate mentors once a week. Aili Pettersson Peeker and Anita Raychawdhuri, both second-year doctoral candidates, mentored the undergraduates and were instrumental in the success of their projects.

This quarter, the undergraduate interns were given the opportunity to present their findings in front of faculty, students and prospective applicants.

This experience was Kassebaum’s first time working with CCBER. “I understand that as writers, we get a bad reputation of sitting behind a desk and reading all day,” he admitted, “but for this internship, we actually did get to go out.”

His first assignment was to go out into the field and catch a butterfly, and over the summer he familiarized himself with data sheets, collected specimens and catalogued them in the database. Kassebaum’s primary objective was to develop a stronger connection with Nabokov both as a person and as a fellow writer. 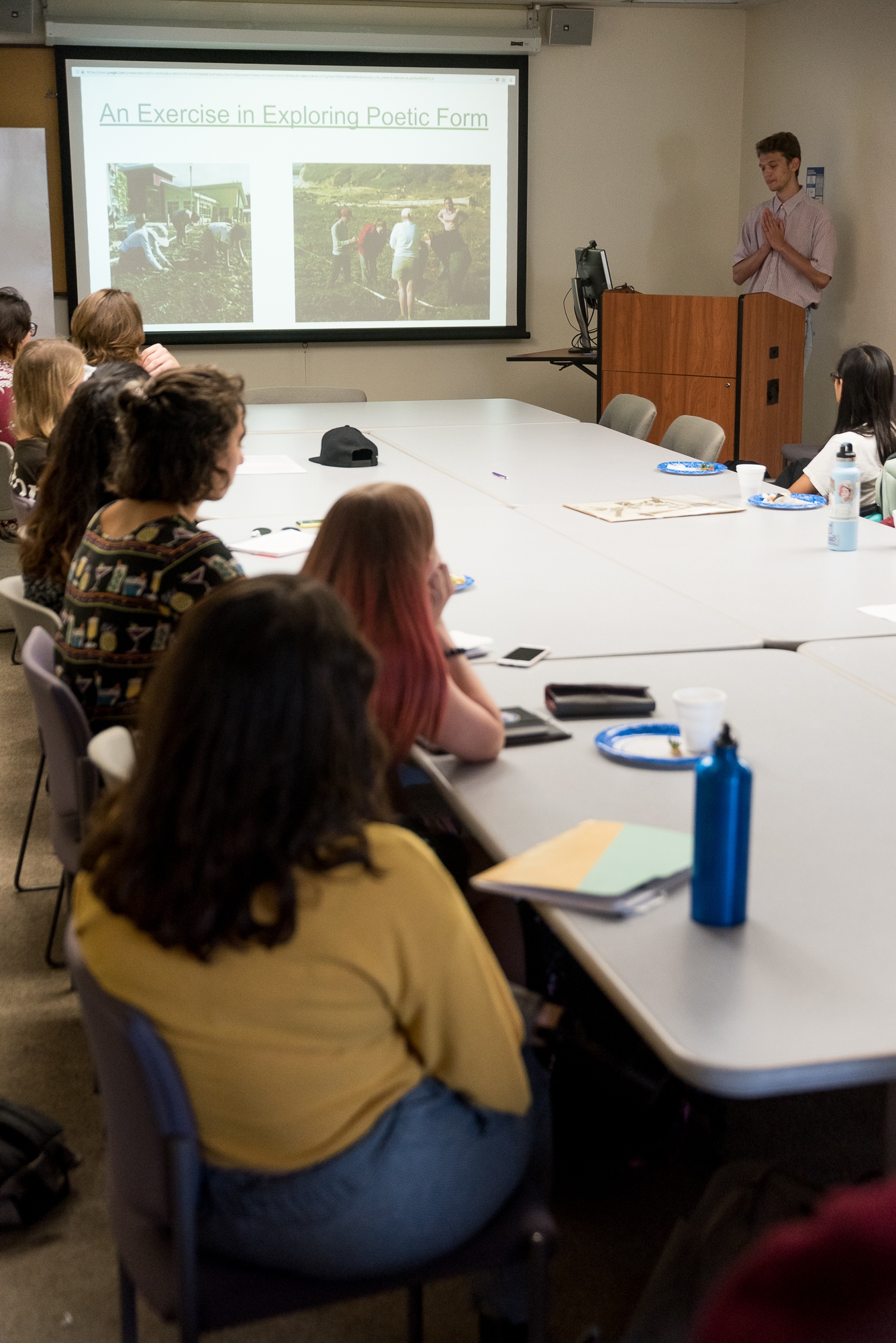 Victoria Penate, who is also a fourth-year English major, reflected on how she initially struggled to decide in which direction she wanted to take her project because she is usually most comfortable when writing about people. During the informational meeting, the name Katherine Esau was mentioned “almost in passing,” and as Penate looked into her life and career, she realized that this was someone she wanted to learn more about.

Esau was a German-American botanist who received her doctorate at UC Davis. She moved to UCSB in 1965, where she did what she herself describes as her “favorite, most productive work.” Esau led a distinguished life; she published several botanical textbooks and was awarded a National Medal of Science in 1989.

Penate found it important to note that Esau’s grand accomplishments as a scientist and a woman were achievable through her day-to-day work and personal life. To conclude her presentation, Penate acknowledged that “it is probably impossible to bring light to every single person who has done important research and who deserves to have their story spotlighted, but it is still important to dig deep into those personal histories because there is a lot we can learn from those who came before us.”

Sponsored by the Arnhold Collaborative Research Grant, the internship program was introduced this year. Any English major or minor who is interested in interning for CCBER for a quarter is welcome to apply, as well as any graduate students who are interested in mentoring interns. Those looking for more information can contact Dr. Melody Jue at mjue@ucsb.edu or Katja Seltmann, the director of CCBER, at seltmann@ucsb.edu.