The Daily Nexus
Sports
Blue-Green Rivalry Comes to SB
October 25, 2018 at 5:05 am by Brandon Victor 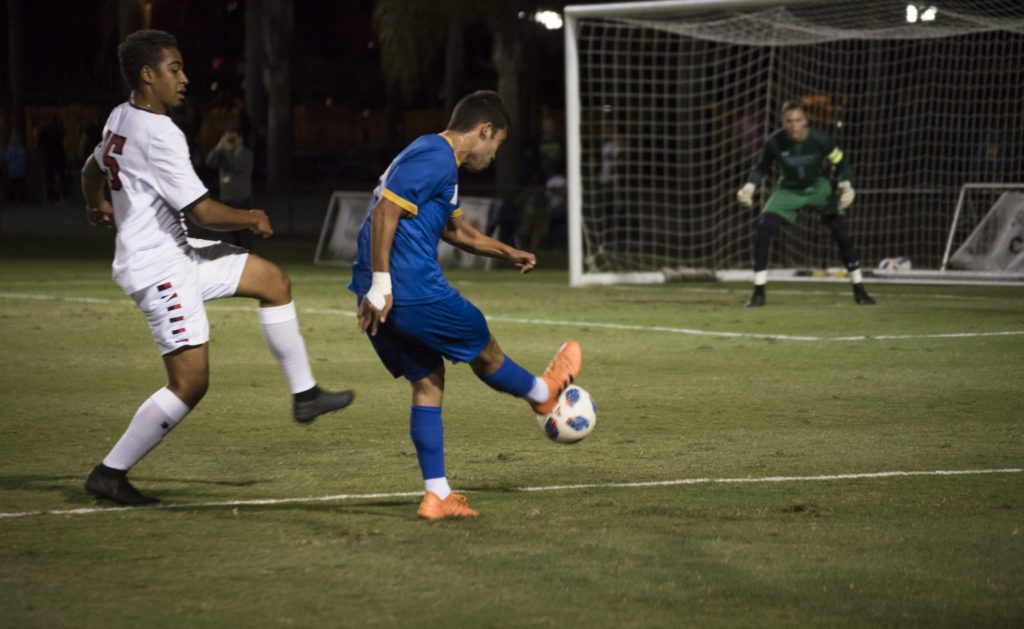 Every time UCSB takes on Cal Poly, the stakes are high. The rivalry match between the two sides has accounted for 15 of the 19 highest-attended soccer matches in NCAA history, and every year it seems that both teams put their best foot forward in this match.
On Saturday, when the Mustangs come to town, the stakes will be even higher for both sides.

For Santa Barbara, the team will be looking to avenge their 1-0 loss at Cal Poly earlier in the year. While they have already clinched at least the third seed in the conference tournament, a victory coupled with a Riverside loss to Fullerton would catapult the team into second place — securing them a first round bye in the tournament.

The Mustangs face a much more perilous situation, needing all three points from Saturday’s match to even have a chance of making the Big West tournament. If they can pick up the away win at Harder Stadium, Cal Poly would still need losses by both Sacramento State and UC Davis to leapfrog into sixth place.

As of late, Cal Poly has dominated this rivalry game. Since Steve Sampson was appointed head coach of Cal Poly in 2015, the team has only lost one matchup to the Gauchos, with their last two trips to Harder Stadium both resulting in scoreless draws.

When the two teams matched up earlier this year for a non-conference game, UCSB played one of their worst games of the season. Offensively, the Gauchos were one-dimensional, launching long balls toward the direction of sophomore forward Rodney Michael and hoping he could run onto one in space. While the team played well defensively, a wonder-goal by Mustang junior midfielder Diego Alonso ultimately proved to be the deciding goal.

Since then, both teams have gone in opposite directions. Cal Poly has only won one match in the six since, with their latest loss a heartbreaking defeat to No. 1 UC Irvine. Due to their recent dip in form, the Mustangs have fallen to a 5-8-2 record.

After a rough midseason stretch — underscored by the loss in San Luis Obispo — Santa Barbara is unbeaten in their past three matches, entering Saturday with a 9-6-1 record. In addition, the Gauchos remain undefeated at Harder Stadium, coming in with a perfect 8-0 record.

Cal Poly primarily runs their offense through senior forward Sean Goode, who has collected seven goals so far this season. However, the Mustangs have struggled to score all season, with only 17 goals in 15 games. Against a stellar Gaucho backline that has allowed less than one goal per game this year, look for Cal Poly to once again struggle to find much room to operate.

Similarly to the Gauchos, Cal Poly is a much stronger team on the other half of the pitch, only conceding 19 goals in 15 games. In the first matchup between these teams, senior keeper Simon Boehme played an outstanding game, making multiple key saves to keep the Gauchos off the board.

If Santa Barbara hopes to reverse their fate on Saturday, they will need an on-and-off attack to be firing on all cylinders. The Gauchos will look to build on their second-half success against CSUN where the ’Chos scored three goals in a ten minute span. Much of that offense was predicted around junior forward Ignacio Tellechea, who was moved to striker to start the second half. While he still remains goalless this season, his movement up front opened up space for his fellow attackers.

As has remained the status quo all year, the main goal threat for Santa Barbara is Michael, who has notched seven goals and three assists this season. His pace and skill moves make him a perpetual threat to find the back of a net, which the Gauchos will look to take advantage of on Saturday.

With everything on the line for both sides, expect a chippy and heated affair in this year’s Blue-Green rivalry match. Kickoff at Harder Stadium will take place at 5 p.m. on Saturday.

A version of this story appeared on page 8 of the Oct. 25th print edition of the Daily Nexus.