The Daily Nexus
Sign of the Times
Argument in the Office: Are Celebrities Obligated to ‘Speak Now’ On Politics?
October 18, 2018 at 10:18 am by Laurel Rinehart and Harper Lambert

No Better Time to Speak Out

On any given day in fourth grade, my friends and I could be found crowded around an iPod Nano, belting along to Taylor Swift’s album Fearless. Her lyrics painted a thrilling portrait of high school. I couldn’t wait to deal with the problems she sang about, like cheating boyfriends and forbidden romances with next-door neighbors.

Amid these saccharine songs about love and heartbreak, one stands out from the rest. Featuring pounding drums and electric guitar, “Change” is an anthem about history repeating itself, tearing down walls and imminent revolution. Its message seems overtly political, especially considering the timing of its release — November 2008. Yet at no point in the song does Taylor speak to any specific issues. When subsequently asked about her political leanings, she replied, “I’m not going to sit here and go into my political views, because that’s not what I chose to do. I chose to do music.”

For the next decade, Swift remained tight-lipped about politics. But in the Trump era, in which the nation is increasingly divided along partisan lines, silence is no longer acceptable. Celebrities have faced mounting pressure to openly pledge their allegiance to red or blue. Thus, Taylor Swift found herself trapped in a catch-22. If she kept quiet, people would accuse her of being a closeted Republican. If she spoke out, people would denounce her for using politics to bolster her image or criticize her for stepping outside her role as an entertainer.

Last Sunday, Swift decided to go with the latter. In an impassioned Instagram post, she endorsed Democratic candidates in her home state of Tennessee and implored her followers to head to the polls on Nov. 6.

Before I go any further, I want to make something clear: Celebrities are hardly ever qualified to speak with authority on political issues. And yet, their influence cannot be overstated.

With over 112 million followers, Taylor Swift is currently the seventh most followed person on Instagram. Her “vote” post received nearly three million likes. Vote.org reported that in the 24 hours after she posted, there was a significant spike in voter registration in both Tennessee and nationwide — almost half a million people in total. In one day, more people registered to vote in Tennessee than they did for nearly the entire month of September.

If celebrities care about their fans at all — especially those who face systemic oppression — they should urge people to vote.

A celebrity’s massive influence presents an opportunity to make a real difference. People ought to use whatever means they have at their disposal to promote civic engagement. Average citizens can do their part by volunteering to knock on doors in their neighborhoods; celebrities can do theirs by reaching out to people across the country via social media.

Voter registration is one of the most responsible ways a celebrity can utilize their power. It’s a far more ethical alternative to selling sponsored products or sheer self-promotion.

Swift and other newly active celebrities have received backlash for exactly that: exploiting politics to boost their reputations. Her detractors deemed her endorsement of democratic candidates an act of “performative wokeness.”

Let’s look at the bigger picture: Taylor Swift has mobilized over 500,000 people to hit the polls. Whether or not they vote for the people she endorsed, they will still vote, and that is what matters most.

For those still opposed to celebrity involvement in politics, consider the alternative. The decision to stay silent is a total waste of a unique position. By choosing silence, celebrities put themselves on the side of everyone who refuses to watch the news because “it depresses them.” The ability to turn off the TV is an immense privilege. Meanwhile, marginalized people, who stand a lot to gain or lose from the upcoming election, can’t afford to not pay attention.

If celebrities care about their fans at all — especially those who face systemic oppression — they should urge people to vote.

Ten years ago, Swift’s refusal to comment on politics was less consequential. This November, the stakes are higher than ever. Simply telling people to register, regardless of their views, is critical. While Taylor Swift will not solely determine this election’s outcome, her choice to post can make a greater impact than you or I can on our own. If she inspires her fans to vote for the “change” her song calls for, so be it.

Harper Lambert wants celebrities to use their power responsibly. 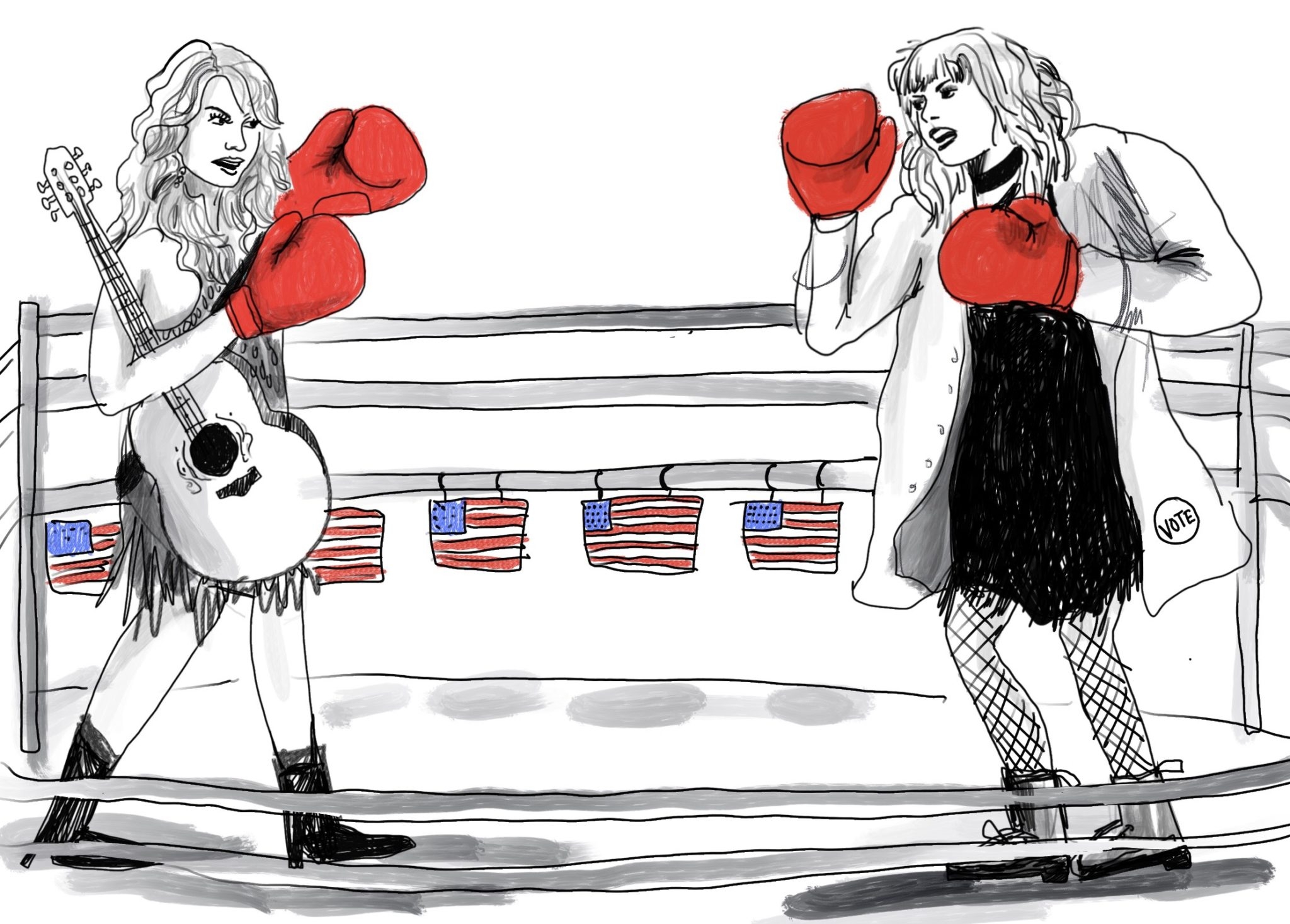 Celebrities Should Stay in Hollywood

When I think of Taylor Swift, my mind automatically goes back to a simpler and more optimistic time: 2009. With her cowboy boots and signature ringlet curls, her appearance is something my friends and I have always tried to emulate at school dances. Taylor Swift’s music became the soundtrack of our lives at the height of our middle school years. Before Instagram made me question my self-worth and the news cycle made me question the stability of democratic values, her wholesome lyrics and music videos constituted a large portion of my media consumption.

Since then, the social and political landscape has morphed into something surreal and chaotic, and the media landscape has evolved in a similar fashion. Rather than allowing people to escape political issues, Twitter and Instagram force users to confront them head-on. Celebrities and laypeople alike participate in this often convoluted arena of discourse.

As of a few weeks ago, the formerly apolitical Taylor Swift is no exception. To some Americans, her Instagram post advocating for liberal causes and encouraging Tennessee residents to vote for democratic candidates in the upcoming midterm elections seems like a step in the right direction. If celebrities have the ability to spread positive messages to a large audience of followers, why not take advantage of the opportunity?

On an individual level, Taylor Swift’s Instagram post can be seen as a positive phenomenon because she encouraged civic participation. However, her fans’ overwhelming response illustrates an alarming precedent regarding the power of celebrities, especially ones uneducated in the realm of politics, to influence the behavior of huge groups of people.

Social media sites have unchecked power to shape public opinion on a mass scale. Instagram, Swift’s platform of choice for posting this political message, has one billion monthly users — many of whom are young and impressionable. And these individuals aren’t just visiting social apps for escapist entertainment; a 2017 Pew Research poll found that 67 percent of Americans get at least some of their news from social media.

The large number of people getting their information from unregulated social media content has proven to have devastating consequences. Preceding the 2016 presidential election, a Russian firm published a series of inflammatory posts and ads intended to dissuade Democrats from voting for Hillary Clinton, reaching an estimated 150 million people in total. It is impossible to know for sure whether the results of the election would have differed if this content had not been disseminated, but it is clear that nowadays anyone can deliver information to the masses with ease.

Influencers have a responsibility to understand the power they have and to refrain from misleading their followers.

Imagine if this political campaign had been delivered by a celebrity with a scope of influence akin to that of Taylor Swift. Celebrities manage to sell worthless products on social media due to their large following and the extent to which they are idolized by their fans, and a political message would likely have a similar effect. Though Taylor Swift’s message dramatically boosted voter registration — a positive effect in a political system whose function depends on civic participation — there is no way of ensuring that every celebrity’s call to action will be ethical or well-informed.

Expressing “woke” opinions on social media is now a trend that many people follow to prove they are informed and engaged during an extremely political era. However, celebrities are not always qualified to provide factually accurate information that serves as a basis for Americans’ political decisions. It’s not inherently problematic for prominent figures to engage in political discourse; however, it is alarming to think that citizens may view these posts as fact without researching the issues further on more reputable platforms.

A decade ago, the stakes for political involvement were not nearly as high as they are now. We belted out the lyrics to “You Belong With Me” and “Love Story” without giving a single thought to the political leanings of their creator because, at the time, politics belonged in the realm of politicians.

Now, everything seems to have a political slant, and people are looking to their favorite influencers for guidance on how to view the world. These influencers have a responsibility to understand the power they have and to refrain from misleading their followers. If that responsibility is not met, the consequences could be significant. Unless they think their knowledge is on the level of a professional journalist or politician, celebrities should set their personal political agendas aside and stick to advocating for Flat Tummy Tea.

Laurel Rinehart wants celebrities to stay in their lanes.