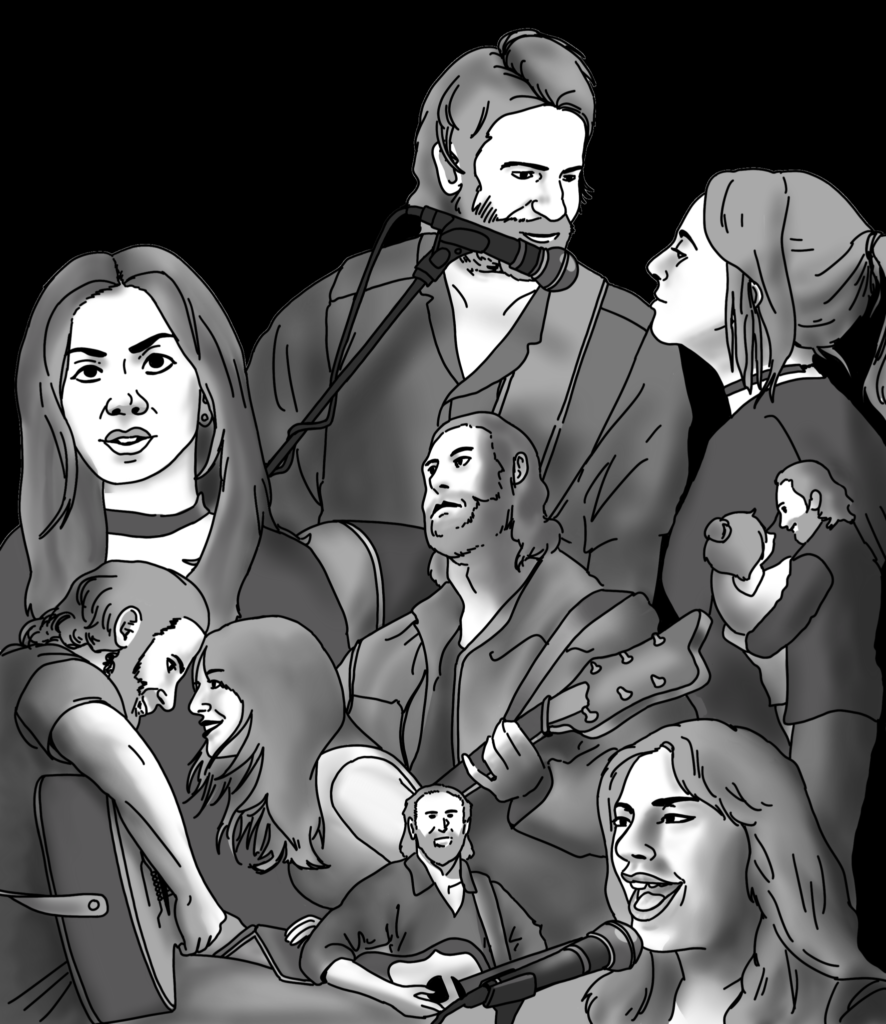 I never cry in movies. Every time I see an emotionally-charged movie with my friends, I gloat about not shedding a single tear, even at the most heart-wrenching, gut-turning scenes. But I’m not ashamed to say I cried while watching “A Star Is Born.” Perhaps it’s a testament to the film’s ability to hit every nerve and proof that it was made with every kind of modern-day music lover in mind.

Bradley Cooper, who also directed and produced the film, plays disenchanted country singer Jackson Maine in earnest, performing all of the songs and even earning a few writing credits on the soundtrack. His story with Ally, played by Lady Gaga, is one of the classic boy-meets-girl variety. In fact, this is the third incarnation of the “Star is Born” screenplay. Lately, it does feel like Hollywood is taking advantage of the remake and reboot format – but in Cooper’s hands, this old story feels fresh again.

The Maine character is a believable portrayal of an old-soul artist with deep-rooted demons. Sometimes the music helps his issues with drugs and alcohol, but more often than not, his dependency is exacerbated by his obligations to withstand long periods of time on the road for tours and an almost constant disconnection from normalcy.

Here’s a surprise: Cooper can sing. Very well. The country-tinged rock songs that his character became famous for sound like they were written for the stage, not the silver screen – which is a good thing. Cooper and co. enlisted the talents of Lukas Nelson, son of Willie Nelson, and alt-country auteur Jason Isbell to assist with the movie’s sound. Maine’s world-weary lyrics paired with his slightly weathered voice are a stunning creation by Cooper and makes for a dynamic fictional artist.

Lady Gaga plays opposite Cooper and shines just as bright as the veteran actor in her first movie role. Of course, her portrayal of Ally mirrors some of the aspects of her real-life rise to fame. After singing in New York clubs for a number of years, she was discovered multiple times, but ran into more than a few roadblocks during her search for stardom.

She was criticized for her appearance, her sound and her songwriting – all things that Ally confronts during her own story arc. After Maine discovers Ally singing an enchanting rendition of “La Vie en Rose” in a drag bar, they soon find themselves swept into a whirlwind of success on each other’s behalf. Ally is skeptical of Maine’s insistence that she’ll make it. You can see a young Gaga in this character, loathing her mousy brown hair and prominent nose.

The chemistry between Gaga and Cooper is undeniable on screen and in the melding of their voices in song. Although the “Poker Face” singer is famous for her high-energy dance tracks, she was classically trained in her teenage years. Her voice is strong and instantly recognizable, but never overpowering. Although she begins her career by singing ballads with Maine, Ally eventually finds her way to pop. At one point, Maine tells Ally to ‘dig down into’ her soul for the music and never lose sight of who she is. But there’s an inherent negativity toward her newfound stardom and her sound that caters toward popular music.

Despite its glossy sheen and overt theatrics, pop music can still come from a place of authenticity. Lady Gaga the pop star is a wonderful example of this. Of course, she’s famous for the antics of her early career, like wearing dresses made of meat. But you never got the feeling that it wasn’t her, craziness and all.

There’s an electric chemistry between Cooper and Gaga that makes them believable as artists and a couple. The film never felt cheesy or forced because of this match, which is what makes “A Star is Born” so damn impressive. Of course, we’re rooting for Maine and Ally, but we’re able to get angry with them when they create chaos for themselves, or when they make the wrong decisions when it comes to each other. It’s easier to love characters that are imperfect.

I cried for the sadness that Maine feels. I cried for Ally, a young woman who is forced to choose time and time again between love and her career. We know these stories by heart now, the real versions. But it takes a screen to magnify them, to show us what artists have to sacrifice to give us the art. We consume it, and we only think about their struggles when they’re laid out in front of us. But they’re in song, so clearly. Jackson and Ally – the singers, the lovers, the characters, the people – show us this.