The Daily Nexus
The Daily Stench
My Boy Adam and I Used an Old Time Machine We Found in My Boy Brad’s Garage to Discover What Dumb Shit Freshman Are Gonna Do This Fall
October 9, 2018 at 4:20 am by Fraternity Phil 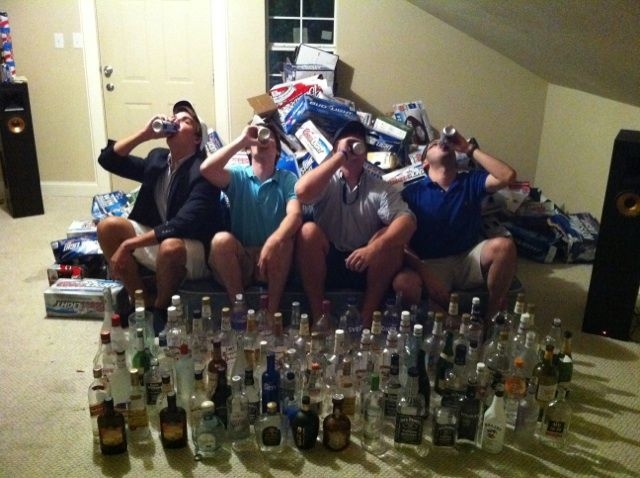 Okay, so we all know what freshman are like, right? They’re kind of like babies; they’re dumb, loud and usually covered in vomit. The only difference is that I can’t pass Freshman Freddy off to my Aunt Carol when he starts screaming, so that’s why my boy Adam and I used the time machine my boy Brad has been keeping in his garage to find out about all the dumbfuck things the freshman are gonna be up to this fall. You’re welcome, Isla Vista.

Since my buddy Brad is kind of a dumbass, the time machine was all fucked up from the beginning. Rather than taking us to the first day of school, it took us straight to Dec. 7, the Friday of dead week. What my boy Adam and I saw when we got out could only be described as a nightmare.

Everywhere you looked, freshmen were panicking. The library looked like something straight out of one of those movies I had to watch when I took a film class because my boy Chad and I thought it would be an easy A. In every stairwell there was a freshman girl on the verge of tears as she broke up with her long-distance boyfriend who everyone totally knew wouldn’t work out. The Arbor was totally trashed. Empty americanos and white mochas littered the tables, as a bunch of nerdy-looking freshman dudes kept repeating “dead week” like they had just learned the phrase yesterday and were excited to show off how with it they were. My boy Adam was almost in tears. We hopped right back in the time machine and set off for the next freshman fuckup.

Okay, so while we were surfing the fourth dimension, Adam kind of panicked and smacked one of the dials with his Hydroflask, and we ended up on Halloween weekend. At first it wasn’t too bad. One freshman girl had her giraffe onesie scrunched around her ankles so she could pee on some plants outside of an apartment complex on Embarcadero. A freshman dude had puked all over his banana costume and was threatening a dude in a gorilla suit. All of it was pretty much as it should be.

We were grubbing pretty hard at that point, so we decided to walk to Freebirds. Words cannot adequately describe the horror we felt when we saw the freshmen clamoring all over the exterior of this one great burrito mecca. One girl was leaning against the building while cheese dangled from her lip as she explained how each of the girls in her party was officially her sister but, like, more than her sister. Another drunk dude had dropped two containers of nachos and was just staring at the ground with a vacant look in his eyes. Needless to say, we didn’t stick around long. Adam and I 86’d those kids, and we were on our way to our final stop.

The time machine hacked and crackled like a fresh Juul pod as we pulled into the first Monday of the new year. The sun threw all sorts of bitching streaks of light across the lagoon, and it seemed like nothing could have ruined that kickass view. That is, until the bike lanes started to fill up.

Within minutes my boy Adam and I were witness to a gnarly 10-bike pile-up, with freshmen girls on beach cruisers congesting every lane as dudes tried to look too cool too quickly by not holding onto their handlebars.You could see his freshman orientation phone case slipping the surly bonds of his hand and joining the infinite as it smacked some dude on a longboard in the face.

When Adam and I finally returned to the present, we were feeling all kinds of wack emotions. First fear, then anger, then hunger, then we were just annoyed. It would have stayed that way had Adam not pulled up a video of my boy Chad and I sticking out our tongues as we showed off the Natty Daddy we’d snuck into FT the first weekend of freshman year. Maybe we were that loud and dumb once. Maybe they’re not gonna stay like that forever. Maybe it’s not all bad, man.

Fraternity Phil just recently discovered online poker, so don’t expect to see him around campus for a while.