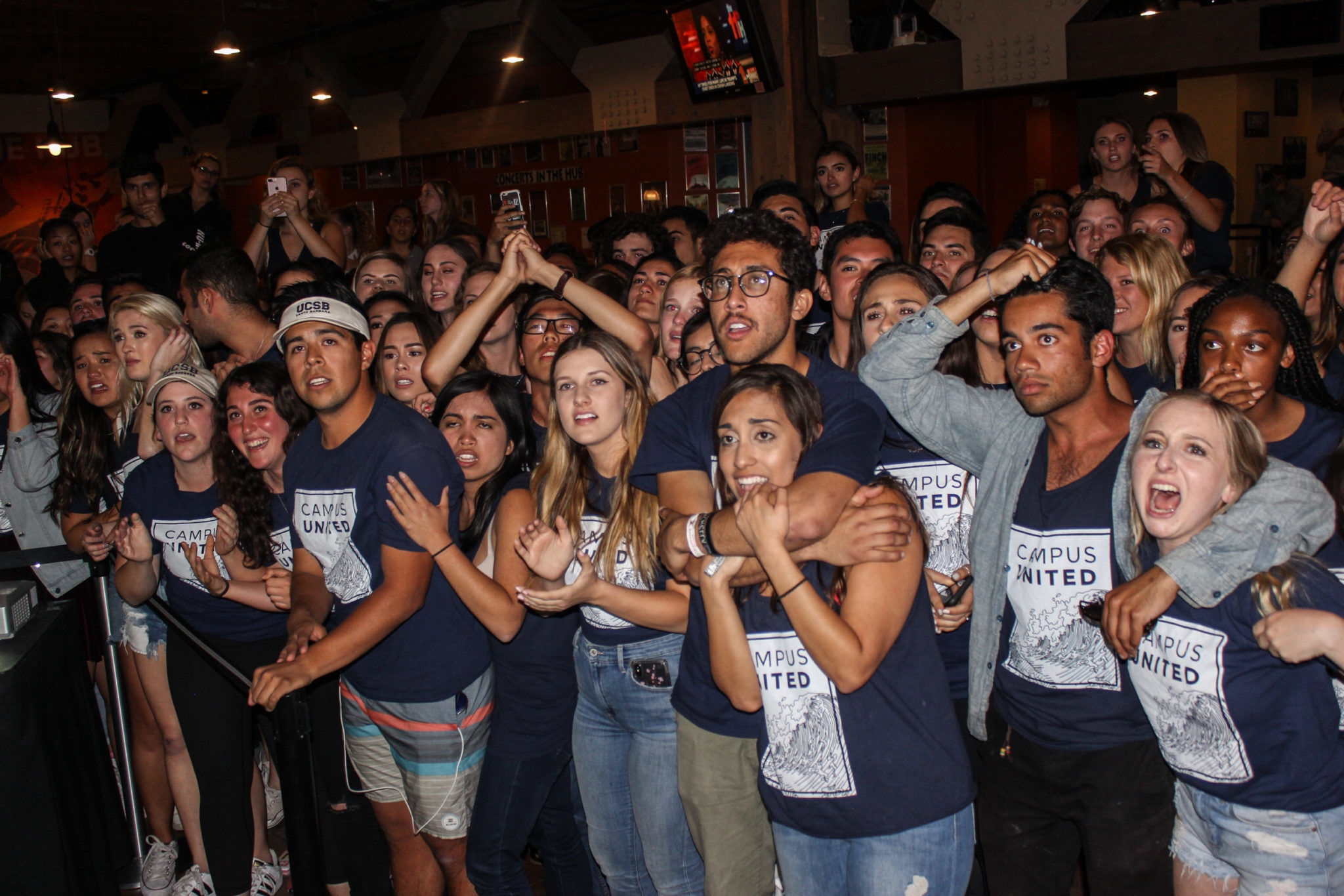 A petition in the Judicial Council could possibly remove several senators from their positions if the Council rules in the petitioner’s favor. Jose Ochoa / Daily Nexus

The second case, Nemeh v. Campus United, alleges that Campus United (CU) “engaged in slander” of IVP during the election. Nemeh asks that the Council remove all senators and executives who ran with CU from their current positions.

The Council initially dismissed the latter case. Nemeh then filed a motion to reconsider the case, according to documents obtained by the Nexus from an anonymous source.

However, the Council lost its quorum just before the 2017-2018 school year ended, leading to a paralyzing situation: Nemeh’s motion and the disqualification case cannot currently be ruled on due to the unprecedented number of vacancies.

A.S. President Brooke Kopel must make four appointments to the Council before they are able to return to regular precedings. Until this occurs, these cases will remain in stasis.

NEMEH AND MORALES V. ELECTIONS BOARD

A.S. Elections Board disqualified Morales from the position of EVPSA in May when it was discovered she was not enrolled in school during spring quarter.

According to A.S. Legal Code, an executive candidate must be enrolled in at least six units per quarter to be eligible for office.

Morales gave no comment at the time of her disqualification in mid-May.

In the petition, Morales and Nemeh request that the Council overrule the disqualification and “investigate the reasoning behind the Elections Board scrutinizing the registration status of Mayela as opposed to all candidates on the ballot.”

According to the petition, she challenged her academic standing with UCSB on the grounds that she had a personal emergency that required her to leave Isla Vista for a period of time.

Morales and Nemeh argue the disqualification was in “blatant violation” of elections code because the board had not informed Morales of its decision soon enough.

They also claim there was a partisan bias in place, calling the fact that the Board choose to focus on Morales rather than another candidate, a “peculiarity.”

“The A.S. Elections Board has shown a deep disrespect for Mayela’s person, the Isla Vista Party, and the voters on campus who overwhelmingly chose her as their next External Vice President of Statewide Affairs,” the petition states.

The Elections Board is currently holding a special election for the EVPSA position. However, if the Council rules in favor of Nemeh and Morales, Morales could be reinstated in her position, causing the special election results to become void.

In the petition, Nemeh alleges that CU was able to “improperly influence” the spring quarter election results through, among other matters, “engaging in slander” regarding IVP.

The “evidence” Nemeh refers to in the petition can be seen below: 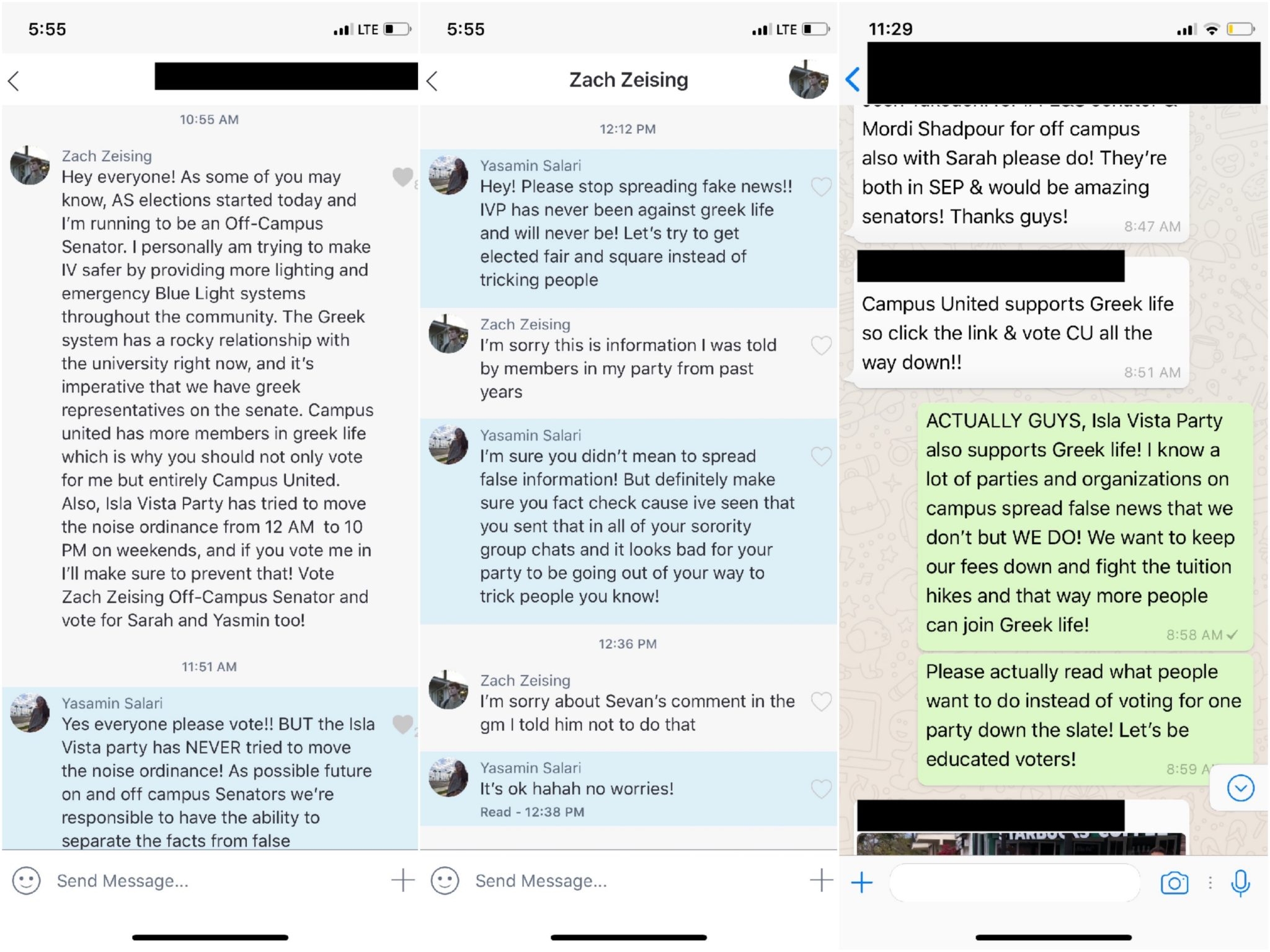 Zeising and Salari could not be reached for comment.

“In no way did CU instruct anyone to lie,” Kopel said in an interview with the Nexus. “I have no reason to believe that if the previous council dismissed the case then the new council won’t dismiss the case as well.”

If the Council agrees to reconsider this case, and then subsequently finds CU leadership at fault for violating Student Conduct policy, then all senators and executives who ran with CU could potentially be removed from their positions. This would leave more than half the senate seats empty.

Full versions of both petitions can be viewed here and here.

I love how liberals are unaware that they also make fake news.

No one cares lmao